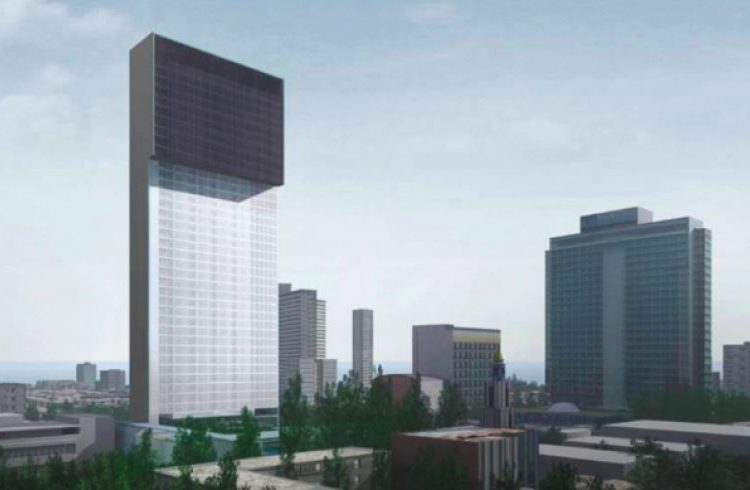 Model of the hotel, very near to the Habana Libre.

The construction of what will be the highest hotel in Havana will begin this very year and will be located on the centric 23rd Street between K and L, in El Vedado.

According to what Deysi Malvares, director of development of the Almest Real Estate Company, reported to the Cuban News Agency, the building will have 42 floors and 565 rooms.

The earth moving will begin in September in the so-called “hole” located in front of the Coppelia ice cream parlor.

The hotel aims to be a five star and must be finished by 2022. It will be much higher than the highest in Havana, with 154 meters, higher than the Habana Libre, with 27 floors and 70 meters high.

The investment comes from a 100 percent Cuban capital.

Malvares said that starting September the basement and access areas will be built during 13 months. Subsequently the rest of the building will be constructed in two and a half years.

The entrance and exit of vehicles, said the specialist, will be through 25 and K, and for the traffic of pedestrians the now nonexistent stretch of K Street from 25 to 23 will also be built.

Founded 20 years ago, Almest has participated in the building of hotels in Varadero, Cayo Santa María, Cayo Coco and Holguín, as well as in the Manzana Hotel – already inaugurated and managed by the Kempinscki Company – and the Packard – whose opening is previewed for August -, both in Havana and with a five-star-plus category.

It has also built houses for the workers of the business system of the Armed Forces linked to tourism.

The same real estate company will soon be in charge of other tourist-related buildings in Plaza de la Revolución, Miramar and Old Havana in order to add 7,500 new rooms by 2025.

Tourism in Cuba, how is it going?