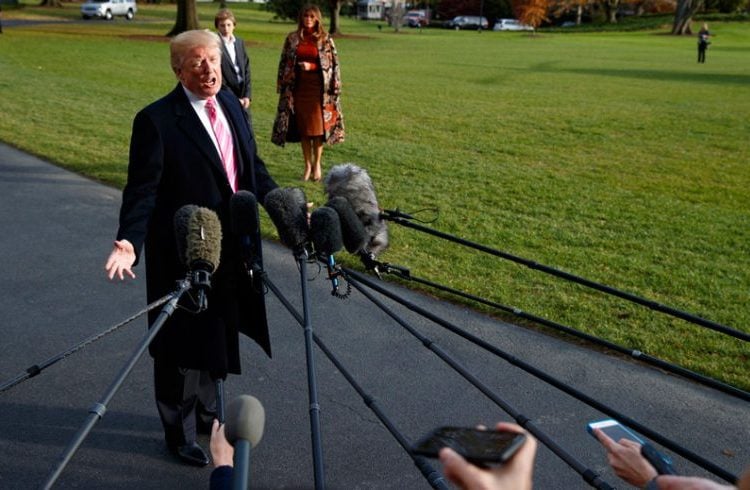 Donald Trump speaks with the press when leaving the White House on November 21, 2017 en route to Mar-a-Lago in Palm Beach, Florida, for Thanksgiving Day. First Lady Melania Trump and their son Barron wait in the background. Photo: Evan Vucci / AP.

President Donald Trump’s message to the nation on the occasion of Thanksgiving Day: Look at all I’ve done for you.
In his Tweet on the night before the holiday Trump wrote: “your country is starting to do really well.”
He went into details: jobs are “coming back, highest Stock Market EVER, Military getting really strong, we will build the WALL, V.A. taking care of our Vets, great Supreme Court Justice, RECORD CUT IN REGS, lowest unemployment in 17 years…!”
Trump is celebrating the holiday in his private Mar-de-Lago Club in Palm Beach, Florida.
He plans to soon thank the armed forces through a videoconference.

The U.S. president’s popularity is at its historic lowest a year after the electoral victory that put him in the White House, from where he has concentrated on undoing the legacy of his predecessor, Barack Obama, although citizen perception is that he has not achieved much.
According to a recent Wall Street Journal and NBC channel poll, in October 38 percent of the citizens backed the president, while 58 percent rejected his administration.
The caravan of cars of President Donald Trump arrives at the Trump International Golf Club on November 22, 2017, in West Palm Beach, Florida. Photo: Alex Brandon / AP.
Another poll published by The Washington Post and ABC channel reveals that only 37 percent of Americans approves Trump’s administration as president, compared to 59 percent who does not agree with it.
The percentage of disapproval is the highest of his presidency and one has to go back to the times of Harry Truman (1949-1953) to find another U.S. president with similar records during the first months in the post.
The poll also shows that 65 percent considers that Trump has achieved “not much” or “little or nothing” since he assumed power.
In June The New York Times published in its article “Trump’s Lies” a list of lies publicly said by the magnate. Later in July they updated it saying: the president continues to lie. They even added a calendar showing the dates of each of his statements, which makes it possible to see their frequency.
AP / OnCuba