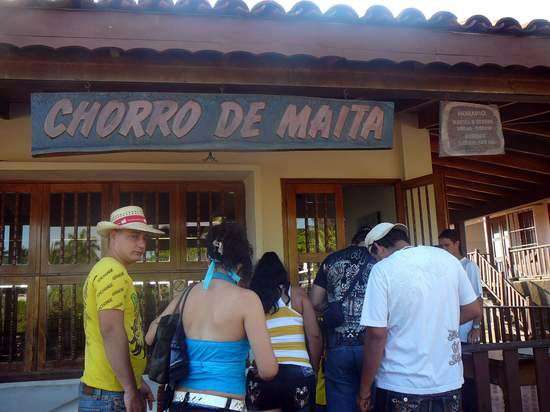 Chorro de Maita, an archaeological site located in the municipality of Banes, is reached through the winding road that connects the city of Holguin with the world famous resort of Guardalavaca.

Some six kilometers after the beach, the road takes you through low hills to   the first aboriginal cemetery discovered in Cuba. After analizing the evidence found and the acculturation of the various forms of burial, scientists think here was one of the first places where the Spaniards and Cuban aboriginal people lived together.

From the Chorro de Maita, the landscape enchants the sensitivity of all visitors. A mixture of greens and browns, topped with the blue of the sea, form a spectacular paradise for those who like to unleash their creative imagination.

According to experts, the site dates from the end of 1440 to 1540, before and after the arrival of the Spanish conquerors in Cuba. The name is justified because the cemetery is located in the grounds of a former farm, owned by a woman known as "Maita", and where, as a fad and gift of nature rises a mighty spring.

But the fact is that thousands of Cubans and foreigners come to this place to share the magic behind the legacy of the native inhabitants of the island, beyond the spring or the privileged environment.

There are many mysteries to unravel in the Chorro de Maita. Among the findings there is a copper medallion, unique in Cuba, which was typical of Venezuelans, who wore it at the height of the patella and shoulders. There they also found the remains of an European, whose 1.76 meter height exceeds the  average Aboriginal and pieces of a princess of Mexican culture, judging by their attributes: a necklace (unique jewel in the Island) made of pink coral , quartz, pearls, gold beads and a two-headed bird head carved in gold also they called Inrirri in Arawak mythology.

In front of El Chorro de Maita, just across the steep road, we have the perfect contrast, just a place where life beats. This is the Taino village inhabited by 38 human sculptures.

The houses, log cabins, farming sites, kitchens, parts, tools, and even objects of play and recreation, as well as the exact clothes and glass beads take you back five centuries to what could be an ordinary day for a family of the Arawak ethnic group.

Perhaps the greatest achievement of the Taino village is the great realism of the sculptures, that is, the exact cranial deformation, facial profiling and the rapid aging of that group of people who at 45 years old were considered elders.

While in the 1930s worked in that area the first archaeologists, it was not until 1975 that Cuban scientist Jose Manuel Guarch discovered, with his wife and children, the bulk of the evidence in El Chorro de Maita.

This demonstrated the high Aboriginal presence in the area, which caused Banes to be named the archaeological capital of Cuba, one of the favorite destinations for vacationers who visit that area.