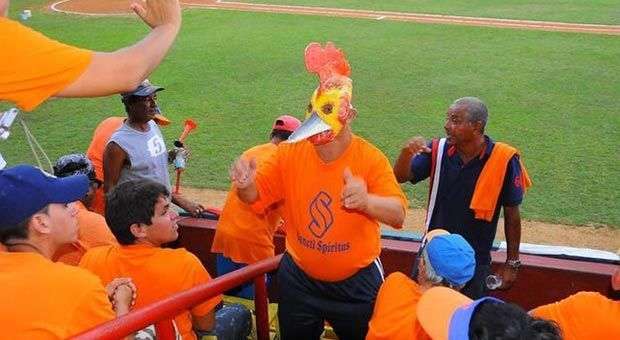 My grandfather was a stubborn peasant fond of baseball, not to baseball; he was fond of the Sancti Spiritus Roosters. Since the first team of this province appeared in the 17th National Series, in 1977, my grandfather never failed to hear a single game of them. Even when he decided to leave the land and go to the city and buy a TV, I’m sure my grandfather would rather listen to the games on the radio. Even before losing almost totally the sight. But he only followed the matches of the National Series. He never cared about the World Series, or Olympics, or Pan-American Games. His Cuba team was the Sancti Spiritus Roosters.
A season after its debut, the team led by Antonio Muñoz, Osvaldo Oliva and a young Lourdes Gourriel, won the National Series. Then it did not mean anything to my grandfather, who had spent many years following the Azucareros team. That was not still his squad. Maybe he celebrated a home run, but did not suffer defeats too much. The fanaticism came with cravings, which were increasing for more than twenty years, to see the Roosters crowned again, his first time as a team follower.
They were very close in 2002, when they faced Holguin in the final, but from that I just remember the strikeout of Cepeda with bases loaded, errors in defense and the continuous blows of my parents toa Soviet stuffed dog, hanged of the stairs, which I inherited from my sister, and the unchanging attitude of my grandfather. It was when I started seeing baseball and to study him. I was then twelve.
The Roosters´ history is well known: all years they have a good season , and every year they are eliminated in Play Offs. The story of my grandfather with base ball was very odd. He never shoutedduring a game, did not curse any player and not jumped off his stool to celebrate victory or criticize a decision. But you could feel the passion in his voice when he said, “Hey, the roosters are pecking”, and I discovered once the sadness in his eyes, in 2005, when we were eliminated in the semifinals by Industriales.
Near the end, my grandfather was losing interest in bas eball, or got tired of waiting for the Roosters´ heart to grow. Although I think his will to live got extinguished or maybe he did not want to get oldand depend on people.
My grandfather did not see the semi-final against Matanzas this year. He did not get thrilled with the win in the ninth inning, when Sancti Spiritus was five runs down and everything conspired in favor of them; pinch hitters did their job, opposing pitchers provided timely dead balls and walked Cepeda to face Yuliesky Gourriel, who was in a slump and had offer a dismal performance in the World Baseball Classic. All people in José Antonio Huelga stadium were standing, but suddenly it fell silent. Everyone had lost confidence in that name. But I had not had the courage to turn off the TV. ThenDanger Guerrero came out to encourage people. Grandpa, then Yulieski waited for the first strike, made swing and missed the second and then he hit a line to the right field that cleaned the bases and we won, grandfather… It was like if we had won the championship. It mattered little that the story to be repeated days later. At that time we were champions. Meanwhile we are still waiting.
My grandfather’s name was Juan Ramon Hernandez Gomez and died last August 5th at ninety-six. He could n ever see The Roosters to win the National Series. We felt that acid taste of unfinishedthings that filled his mouth for more than thirty years, and the commitment of never to switch off the radio or TV until the last out, and the hope always, of course. But people are weary of waiting,grandpa, and sometimes you feel that the desire is fading, and the chances are also decreasing. People are sure that this year, any year, though we hate to admit it, is not going to be the year of the Roosters. I think he would tell me: “Maybe they peck, my child”…