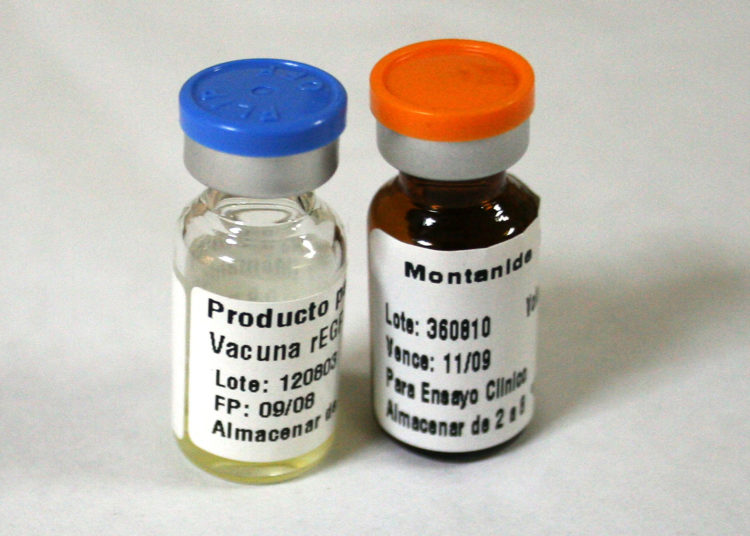 Statistics, as cold as irrefutable, are moving. Cancer represents one of the most complex challenges of biomedical, social and economic sciences. According to the World Health Organization (WHO),1 that disease – or system of diseases – represents the second cause of death on a global scale, only surpassed by cardiovascular conditions. Close to 8.8 million persons died due to malignant tumors in 2015. The data implies that one out of every six deaths was related to that condition. In this group, lung cancer has the highest indices of incidence, with 1.19 million deaths per year (19{bb302c39ef77509544c7d3ea992cb94710211e0fa5985a4a3940706d9b0380de}).

Cuba and the United States exhibit a panorama very similar to the global performance. According to the Health Statistical Yearbook,2 during 2015 malignant tumors caused on the island 215 deaths/100,000 inhabitants, while in the United States the rate has been estimated in 171.2/100,000. In both cases the figures are only surpassed by cardiovascular conditions. Lung cancer also registered the highest indices. It’s not strange then that both countries dedicate significant efforts – from different focuses – to combat this system of diseases.

Thus in 2011 an informal collaboration was born between the Molecular Immunology Center (CIM) belonging to the West of Havana Scientific Center and the New York Roswell Park Cancer Institute. A collaboration that led to Governor Andrew Cuomo announcing in October 2016 that the U.S. Food and Drug Administration (FDA) had approved a license to carry out clinical tests with the Cuban CIMAvax vaccine, developed for the treatment of lung cancer. Last January, Candace S. Johnson, president and executive director of the New York institution, notified3 the start of the test (phase I/II) for which 90 patients had been registered. The Cuban vaccine will be evaluated in combination with Nivolumab, a monoclonal antibody approved for the immunotherapy of several types of cancer.

CIMAvax is the result of 25 years of research lead by the CIM. It was evaluated in clinical tests for the first time in 1996 and, since then, several tests have been made to improve its formulation, immunization scheme and efficacy.4 The vaccine is formed by three fundamental elements: a human epidermal growth factor (EGF) produced through recombinant means, combining the protein P64k and emulsified with Montanide ISA51. The latter two components strengthen the recognition of the EGF by the patient’s immune system. One of the great attractions of the vaccine, according to what Dr. Candace S. Johnson has also pointed out, is that it combines a relatively simple formulation with an innovative action mechanism.

How does CIMAvax act? In tumors of epithelial cells an overexpression of the EGF receptors is produced. The union of these receptors of the growth factor guarantees – together with other mechanisms – the uncontrolled proliferation characteristic of tumoral cells. When CIMAvax is used, the patient develops antibodies that join the EGF. Therefore, CIMAvax does not directly attack the tumoral cells but rather on decreasing the levels of the available EGF, it delays the development and growth of the tumor. One of its great qualities, in addition to the effectiveness, is that it has minimum collateral effects, which contrasts with focuses such as chemo and radiotherapy.

It is important to highlight that CIMAvax is a therapeutic vaccine, which means it does not prevent the appearance of the cancer, but rather it helps in its treatment. In general, CIMAvax has increased the quality of life and life expectancy of the treated patients. A clinical test that included 80 patients demonstrated that, in the group of under 60 years of age, the therapy increased life expectancy in an average of 11.57 months. In this point I remember what I once heard from a CIM researcher in the classrooms of the University of Havana with respect to the cancer therapeutic vaccines: “From the perspective of a patient who has been diagnosed with terminal cancer, each day won can actually represent a lifetime.”

According to a study5 whose authors include doctors Tania Crombet and Camilo Rodríguez, leading scientists who have led the development of the vaccine, in our country more than 4,000 cases of lung cancer are diagnosed every year. After a clinical test (phase IV) was concluded in 2015, CIMAvax started being used in the Cuban primary health care system. To date, more than 1,000 of the island’s patients have been treated with the vaccine. They are joined by a total of 5,000 from countries like Peru, Paraguay, Colombia and Bosnia-Herzegovina.

And even from the United States. Last November the New York Times6 published the story of Zuby Malik, a U.S. gyneobstetrician who traveled to Havana and on her return, violating her country’s laws, took back with her CIMAvax. According to what she told the NYT, a while after initiating the treatment, it became easier for her to breathe and she recovered her energy. The article also cites the words of Mick Phillips, 69 years old, and who said that he visited Cuba in 2012 and has returned every year since then to continue the treatment. “As children, we were taught that the Cubans didn’t know what they were doing. It turns out that they do know.”

In the future, patients from other countries could start benefitting from this therapy. Several European nations and Japan have shown interest in the vaccine. The British media and organizations like Cancer Research UK have started mentioning the possibility that, if there are positive results in the test initiated in the Roswell Park, CIMAvax could even be available in the United Kingdom.

And speaking of future – for which, undoubtedly, the results of the clinical test in the United States could be decisive -, Congressmen Seth Moulton and Jim McGovern recently visited Havana and highlighted7 that their trip was centered on exploring the possibilities of collaboration and businesses for the biotechnological companies and the biomedical sciences sector. Meanwhile, Thomas Schwaab, chief of business strategy and development of Roswell Park, recently announced8 the creation of a joint venture between his institution and the CIM. The venture could start working next April and would have as its base the Mariel Special Development Zone. According to statements by professor Schwaab, the corporative association is now open to investors.

The doors could also start being opened for leading Cuban biotechnology products like Heberprot-P, a medicine that is the only one of its kind for the treatment of diabetic foot ulcers. More than 55,000 Cuban patients and 220,000 outside Cuba have already benefited from that treatment.

From Havana to New York, CIMAvax could represent the passkey that brings closer in the horizon the possibility of new collaborations, as much as the horizon of another day has been made credible for many patients, which as that CIM specialist told us, is actually a lifetime.