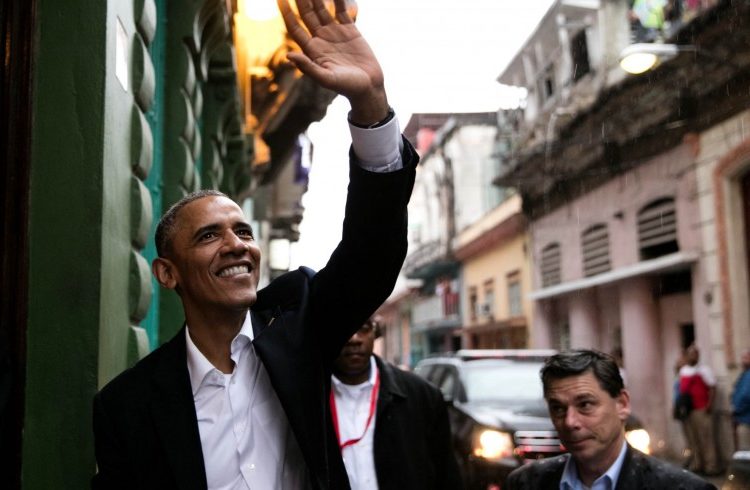 On several occasions, Barack Obama expressed a vision about the U.S. presidency as a relay race. The efficiency of his work in the White House implied the responsibility of handing over the baton to his successor in a better situation than the one he inherited from President Bush in 2009.

From that perspective, the historic trip of the then U.S. president to Cuba a year ago yesterday was a resounding success. The United States and Cuba are now in a better situation to advance national interests and values, managing their conflicts in a more constructive way.

The official U.S. vision about Cuba, expressed in the presidential directive of October 2016, is much more realistic, and better understands its priorities, opportunities and challenges than at any time in the history of bilateral relations after 1959.

After the rapprochement in Cuba-U.S. relations with the December 17, 2014 agreement, President Obama’s trip to Cuba endeavored to speed up the negotiations between the two countries and to make irreversible the change of Cuba’s image in the U.S. and of the U.S. in Cuba.

The trip to Havana was, in itself, a symbol and a new message for the Cuban and U.S. peoples. President Obama displayed all his charisma, making emphasis on the usefulness of dialoging with countries with which the United States has had a turbulent relationship and promoting the logic of mutual benefits. He did it in his own way, combining the government-to-government respectful discussion with initiatives and messages directed at a greater interaction between societies on both sides of the Florida Straits.

To the U.S. people he ratified the relevance of updating their vision about Cuba. From considering Cuba a threat to the United States in the U.S. official language – unfairly included on the list of nations sponsoring terrorism until May 2015 – the island was presented on the coverage of the March 2016 trip as a country in change, in transition to a more open and more market-oriented model, with more opportunities and possibilities for trips, business, commerce and interaction.

Undermining the logic of enmity and travel ban, the White House occupant, with the first U.S. family of the time, became the head traveler of a country where the U.S. laws still ban traveling to Cuba. The president accompanied the new discourse with a substantial opening of general licenses and authorizations for direct commercial flights that lighten the cost and administrative work of the trips.

With activities difficult to describe as “non-touristic,” like walking through Old Havana, eating in its private restaurants (a tangible denial of Havana’s image as a Pyongyang in the Caribbean), and watching a baseball game in the same box with President Raúl Castro, Obama incited his compatriots to visit a Cuba that was waiting for them, breaking the mold of the cold war.

The parade of businesspeople, scientific and educational institutions, philanthropic groups and Americans in general did not take long in placing the two societies face to face with a new scope of opportunities of prosperity and constructive interaction depending on the change of both sides’ public policies.

After Obama’s visit, several heads of state of U.S. allied countries in Europe, Latin America and Japan visited the island, ratifying the recognition of the new course of relations between the two countries and taking advantage of the thaw with Washington to explore options that advanced their economic and political interests.

The thaw with Washington also created a favorable environment in Cuba’s economic and political negotiations with other actors like the European Union and the Paris Club in terms of the debt. It would have been difficult for those negotiations to have produced the positive results achieved by Cuba if hindering them would have been a priority for the Obama administration.

With his speech in the Grand Theater of Havana, Obama brought to the fore the need to put an end to Washington’s embargo / blockade as well as leaving behind the mentality of economy of social command and control predominant in the power circles in Havana. Obama presented with transparency before Cubans and Americans, as he had already done shortly before in his last State of the Union speech, the bases for a different policy.

The blockade and attempt of domination through coercion were presented as an anachronism to the potentials for the United States in Cuba of a hegemonic policy and of persuasion. The best U.S. tools in that logic would not be the sanctions or the impositions of a change of regime but rather its soft policy, its ability to attract, negotiate, trade, present its freedoms.

For the Cuban leadership that will emerge in 2018, which lacks the charisma of Fidel Castro and the revolutionary legitimacy of the generation of the centennial, the challenge of a policy of hegemony by persuasion is more complex but less damaging than the blockade and the threats to security. More trips and more commerce and exchange with the United States represent a friendlier world for the Cuban reforms underway, which are essential to build new zones of intra-systemic legitimacy.

Obama placed on the table of calculations of the new generations of Cuban politicians in the State and society the possibility of an asymmetric normalization, with U.S. respect for Cuban sovereignty and Cuban deference toward the U.S. status of great power.

Obama traveled to Cuba with impunity. Few events have caused more desolation and destruction to the pro embargo group in Washington, which until then had enjoyed an unjustifiable halo of power. If something became clear for Mr. Trump if he wants to hear of it, it is that those in favor of the embargo on Obama’s acts had to take in the complete trip without putting on any resistance in U.S. public opinion or in the institutions. The price to pay in the presidency or in Congress for advancing a constructive course of negotiation with Cuba is barely that of buying tickets.

After the March trip, Cuba and the U.S. speeded up multiple sectorial negotiations coordinated from a bilateral commission in which topics like sovereignty, democracy and human rights, where there are deep differences, were also discussed. The Obama administration understood that the dignity of a great democratic power and the weight of the power asymmetry allowed the U.S. to negotiate with a small State like Cuba in its vicinity without the short sightedness of a transnational focus of tit for tat. Such a focus won it domestic and foreign policy credits, like the recognition received by President Obama from the already much divided Cuban-American community and at the Summit of the Americas in Panama.

The visiting president’s message to the Cubans also implied a change in the narratives. Before the first intergenerational transition in the post 1959 Cuban State leadership, Obama called on Cubans to not be hostages of historic conflicts between the two countries and to seek alternatives to build a more prosperous country and a constructive relationship between the two societies.

It does not concern the U.S., it’s not its responsibility, to lead the changes that Cuba needs. The United States abandoned, at least temporarily, the oversimplification of viewing Cuba’s policy with the obsession of bringing down Fidel, Raúl Castro and the government of the Communist Party. It’s difficult for the U.S. to return to such a narrow vision of Cuba after the president’s trip and his talks with the emerging Cuban entrepreneurial sectors and civil society.

It remains for President Donald Trump to grab the opportunity of advancing along a less rugged road in the next years or to insist in taking back relations with Cuba to the logic of confrontation that produced nothing positive. It also remains to his foreign policy team to assess with objective criterion the possibilities of the actors and political processes taking place on the island.

For this adjustment, it would be convenient for President Trump to be better informed about the most relevant agendas and actors in the Cuban panorama. If he opts for listening to some of the most furious opponents of the Cuban government, restituting sanctions or restricting the licenses that Obama opened, he can end up damaging, more than the government, the new emerging sectors of the private market and property on the island. These sectors are today more relevant than the opponents preferred in Washington and Miami, in the process of liberalization.

The new diplomatic and security team in Washington has the challenge of escaping from the reductionist version about human rights and opening in Cuba that predominated until the last years of the Obama administration. Up until 2014, any talk about democracy, human rights or modernization in Cuba always passed in the official Washington through an exaggerated reference to immediate multiparty elections and the handing over of power to those preferred sectors – be they by the most right-wing Miami or Obama’s Washington, more liberal but not less interventionist. Obama’s trip to Cuba in March 2016 started changing that perspective.

Obama’s policy did more for the U.S. commercial and investment interests and to promote the U.S. agenda of security and migration in the Caribbean than all the decades of hostility. General John Kelly, current Secretary of Homeland Security, affirmed so at the time. He advanced several of the communication programs between the armed and law and order forces of Cuba and the U.S. when he was commander of the Southern Command. The U.S. Chamber of Commerce registered it thus as well as the hundreds of lawyers and negotiators who visited Cuba after the presidential trip. Today, Starwood, a U.S. hotel chain, is managing its first installation in Havana. To further advance U.S. interests, the Trump administration should expand and not reduce the dialogue, the negotiation and the exchanges with Cuba.