The meeting, organized by CubaOne, Hape and Cuba Educational Travel, proposes the exchange of ideas and dialogue between Cuban women from both shores. 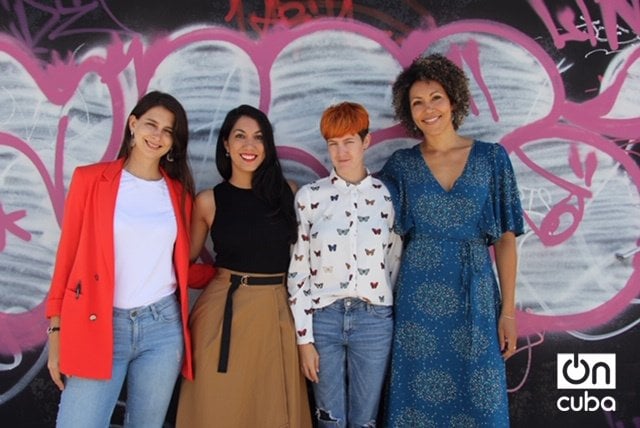 Four women, artists and entrepreneurs, traveled from Havana to Miami to participate in the Creativas event this May 5. It is a new space that encourages dialogue between Cuban women from both shores.

The name of the event was promoted as Creativas^2, or square power of the word “creatives,” because “the union or merging between Havana and Miami allows results to emerge with greater impact,” said one of its organizers, Giuseppe Andrea Scrufari, founder of Hape Collective.

He and the founders of CubaOne and Cuba Educational Travel, also organizers of the panel, hope that this will be the first of many meetings, from Havana to Miami, and from which future ideas of collaboration between people from the creative world and entrepreneurship of both countries can emerge.

“These meetings will generate friendships and exchange of ideas and opportunities on both sides,” said Scrufari.

The island’s four participants on the panel are women from the world of art or self-employment, leaders in their respective fields.

Lauren, Cristina, May and Martha come from different fields such as photography, business, curatorship and fashion. They seek to describe and offer a broad panorama of Havana’s creative movement, according to their perspective and experience.

“They will be only women because they are protagonists of the current creative movement in Havana. They are young and with a desire to create from there. In addition, they show a new face of the Cuban capital to the outside,” explains the founder of Hape.

Cuban photographer and actress May Reguera says she doesn’t like to talk about her work, but that she’s excited about the opportunity of sharing her personal experience with other creative Cuban women.

“I think that the sensations that move me as an artist are directly linked to my country, my personal circumstances and my training as an actress. All this translates into light, characters and emotions,” she said.

For her part, Marta Deus, entrepreneur and founder of Negolution magazine, shared her experience as a private worker in the island’s current circumstances.

“I am happy to participate in this meeting with so many talented women and to share with the public a bit of what happens in Cuba about digital media and what we do in Negolution with entrepreneurs,” she said about the event.

Cuban fashion designer and producer Lauren Fajardo, co-founder of DADOR, had participated in other meetings of this type, but from Havana. Doing it from Miami is something that “excites” her.

“It is a great opportunity to share the work we are doing in DADOR and shed light on the importance and impact that the current movement of Cuban entrepreneurs has on the building of a new path for future generations,” said Fajardo.

Plastic arts curator Cristina Figueroa Vives took to the event her experience in the gallery she manages together with her family, also artists.

“Our battlefield has always been adaptation, acceptance, respect for others and, above all, the power of dialogue. It is under these premises that we can work together on the future of Cuba,” said Figueroa.

“Creativas is the ideal opportunity to share all these experiences,” she concluded.

For the Miami public this is an important meeting as it represents an opportunity to discover new projects in Havana that are having a positive impact, the organizers explained.

Although for the time being the island’s participants only come from the capital, the idea could be expanded to other cities in the country to encourage exchange with similar experiences.

The premise of all those involved was to show, in just one afternoon, on the one hand the new talents and on the other, the contemporary sound of Havana with a concert by Cimafunk, “the island’s new musical sensation,” in the words of Giuseppe Andrea Scrufari.

How was the process to set up that exchange on this occasion? How has Miami welcomed it?

The idea was quickly arranged and received much interest from cultural institutions in Miami. We hope that this initiative will be seen as an unprecedented opportunity to listen and assimilate the lessons of Cuban women entrepreneurs and pioneers who achieved projects having an impact, facing several difficulties.

How does the announcement of new restrictions toward Cuba affect you as organizers of spaces for exchange?

The idea was born before these measures were announced. Our hope is that these don’t cut off the dialogue between the new generation of Cubans and Cuban-Americans, who in their vast majority want an approach rather than distance.

What is the importance of an event like this in Miami in the current political context?

Such an event is important because it gives voice and body to a new generation of Havana creative people, who, however, do not receive well-deserved media attention and tend to be displaced by the bad news of the current political context. These women, the guests, are not political and transmit their ideas through their projects, something that has to be universally accepted and welcomed in any context.