Cuba and the USA open their doors 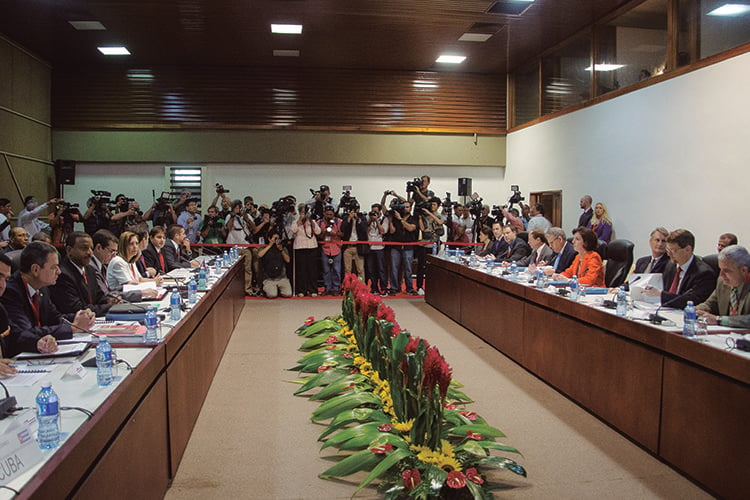 December 2006 Raúl Castro gives his first speech as interim president. He includes a sentence expressing his “willingness to resolve at the negotiating table the prolonged conflict between the United States and Cuba.”

December 4, 2009 Alan Gross, a subcontractor for the U.S. Agency for International Development (USAID) is arrested by Cuban authorities and accused of distributing telecommunications equipment as part of what a Havana court described as a “subversive operation.” He is sentenced to 15 years in prison.

The administration of U.S. President Barack Obama says that Gross’s release is the condition for any dialogue with Cuba. Cuba responds by asking for the release of five of its intelligence agents, who are held in U.S. prisons on espionage charges.

April 2012 Barack Obama faces a little-publicized diplomatic crisis. The U.S. president travels to the Colombian city of Cartagena de Indias to attend the 6th Summit of the Americas. There he finds the growing tendency to the left of most Latin American governments, which ask en bloc for the presence of Cuban President Raúl Castro at the next summit meeting, set for 2015.

Months later, Obama fires Dan Restrepo, until then his advisor for Latin America, and he offers the job to a man who is better versed in Cuba matters.

June 2012 Ricardo Zúñiga joins the U.S. National Security Council as special assistant and senior director for Latin America. He is a Honduran native who is very familiar with Cuba and who seems perfect for the job of building a bridge across the Florida Strait. This young Latino diplomat served for several years at the U.S. Interests Section in Havana.

June 2013 Secret, face-to-face negotiations begin. Months earlier, Obama had authorized exploratory discussions with Havana. They are a success. Unidentified Cuban diplomats negotiate in complete discretion with Zuñiga and national security advisor Ben Rhodes. They all have to travel incognito to Canada starting in June of 2013.

Nobody finds out that, for 18 months, diplomats from the two governments were holding secret meetings, first in Ottawa, then in Toronto, and finally crossing the Atlantic on the way to Rome, to the Vatican’s offices, the ideal place for working an authentic diplomatic miracle.

November 2013 President Obama publically announces the need to update foreign policy on Cuba. “Keep in mind that when Castro came to power I was just born. So the notion that the same policies that we put in place in 1961 would somehow still be as effective as they are today in the age of the Internet and Google and world travel doesn’t make sense,” he says in Miami during a Democratic Party fundraiser.

December 2013 Raúl Castro and Obama shake hands at the funeral of South African leader Nelson Mandela. A greeting just seconds long that generates headlines and editorials calling for understanding between their governments.

March 2014 Pope Francis becomes the godfather of restoring relations between Cuba and the United States. The Argentine-born religious leader touches on the subject with the U.S. president during the first meeting between the two in March of 2014. Months later, the pope sends letters to Obama and Castro, insisting on the matter.

The details are not completely public yet, but the last of nine secret meetings was held at the Vatican and opened the way to the announcement of the restoration of diplomatic relations between Cuba and the United States.

June-July 2014 U.S. Secretary of State John Kerry and Cuban Foreign Minister Bruno Rodríguez talk on four different occasions during the summer of 2014. Warnings are heard from Washington about the importance of Alan Gross’s life for the Obama Administration.

December 16, 2014 Barack Obama and Raúl Castro talk by telephone. They define the final details for the next day’s announcement. The historic phone call between the Palace of the Revolution and the White House lasts a little over 45 minutes. They talk about cooperation on matters such as the fight against the Ebola epidemic and collaboration in fighting terrorism and drug trafficking.

Secretary of State John Kerry comments that he would like to be the first head of U.S. diplomacy to visit Cuba after the thaw, comparing the new step to his country’s relations with Vietnam and China. His department will begin reviewing Cuba’s inclusion on the state sponsors of terrorism list.

Without any reserve, the Department of Commerce and its secretary, Penny Pritzker, immediate announce that they’re going further. “President Obama and I believe deeply in the power of commercial diplomacy to change lives and economies for the better. We are putting this belief to the test in Cuba,” Pritzker says in a press release.

January 16, 2015 The Obama Administration’s new policy goes into effect. (See on p. 22: Measures that will promote imports and travel from the USA)

January 22-23, 2015 Josefina Vidal receives Roberta Jacobson at Cuba’s main conference center, the Palacio de las Convenciones. Vidal, who heads U.S. affairs at Cuba’s Foreign Ministry, represents her country in negotiations with Jacobson, who is the U.S. assistant secretary of state for Western Hemisphere affairs. Both sides recognize that differences persist on subjects such as democracy and human rights, amid a constructive and encouraging dialogue on areas such as human trafficking, law enforcement, environmental protection, and telecommunications.