The Florida International University poll indicates that President Donald Trump has the consensus of all Cuban sectors in South Florida, including the last generations that have arrived. 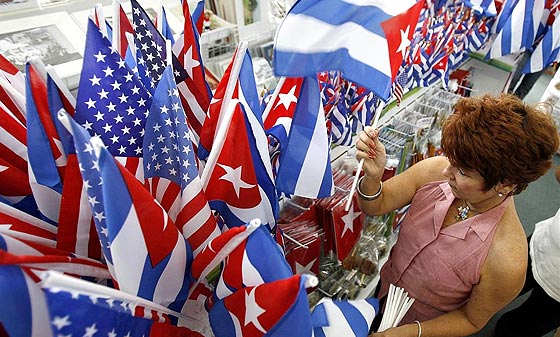 In two years, Cubans living in Miami-Dade County have taken a turn to the right, especially the young. Despite demanding the preservation of basic ties with the island, especially family members, they have adhered to many Republican postulates. In general, the latest poll by Florida International University (FIU) indicates that Republican support has increased and that in these elections Cuban-Americans are going to vote overwhelmingly for Donald Trump.

According to the poll, 68% of Cuban Americans approve of Donald Trump’s Cuba policy, something that spans the entire spectrum of the community―ages and arrival date―but not with bipartisan unanimity, since it is opposed by those who define themselves as Democrats. 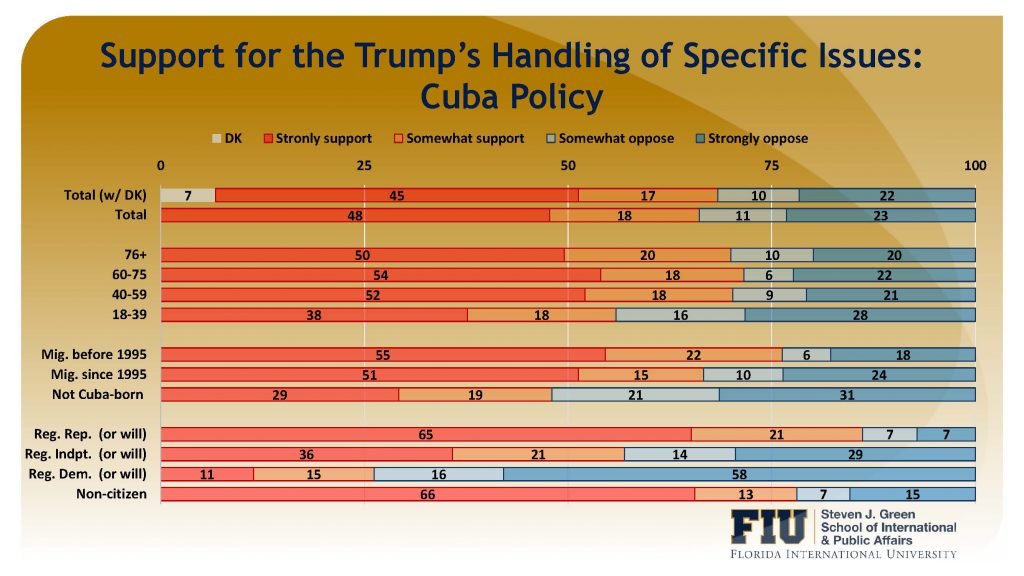 “Cubans are not very different from people in Ohio, these Cubans are part of the narrative of the country. Republicans have gained strength again because what Trump has done gave them new airs. Now, the big surprise is that Republicans have increased, but it is not surprising that Cubans continue to vote for Republicans,” explained Professor Guillermo Grenier, one of the authors of the poll that has been running for almost twenty years.

This is the second FIU poll since Trump arrived in the White House. The first, in 2018, indicated that the trend was towards the hardening of isolationism and has continued that way. It has become more hardened on this occasion, with the aggravating circumstance that they join the positions advocated by the current administration. 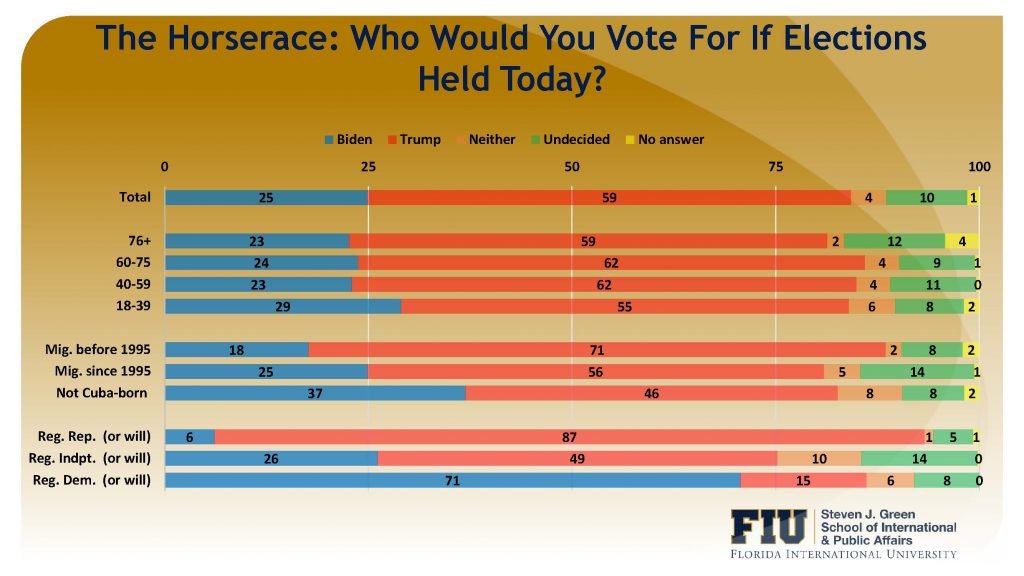 The embargo is still the big divider, but this year the percentage of support is 60% versus 40%: two years ago it was 48% in favor. Among those who came to the United States before 1995, support reaches 68%. After that date it drops to 54%. 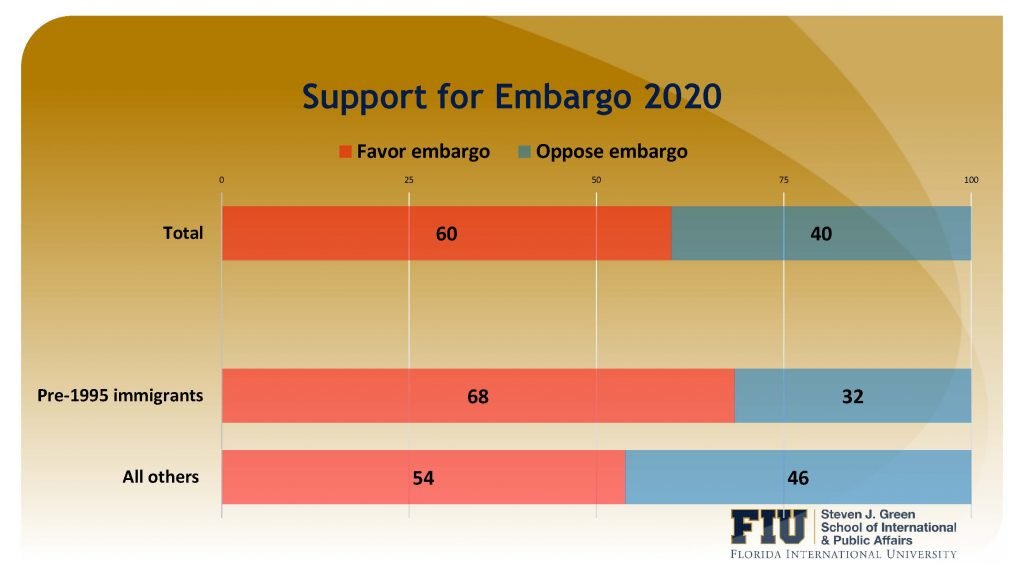 In this regard, only Cuban Americans born outside the island advocate for the end of the embargo (50%), but the other half sustains the need to maintain it. In terms of political parties, the overwhelming majority of Democrats (71%) oppose continuing the embargo. Everything else is in the red zone. The embargo must continue. 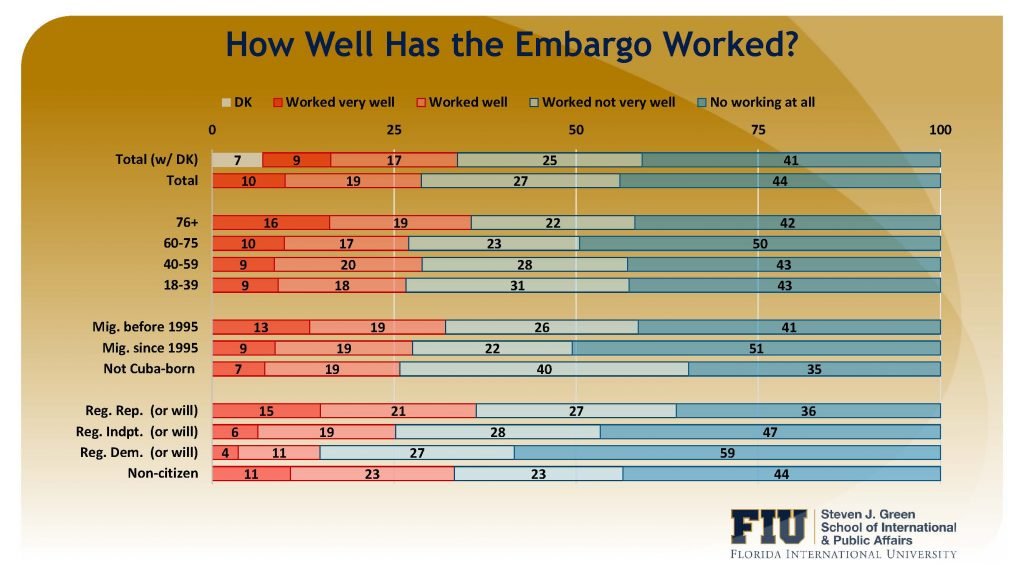 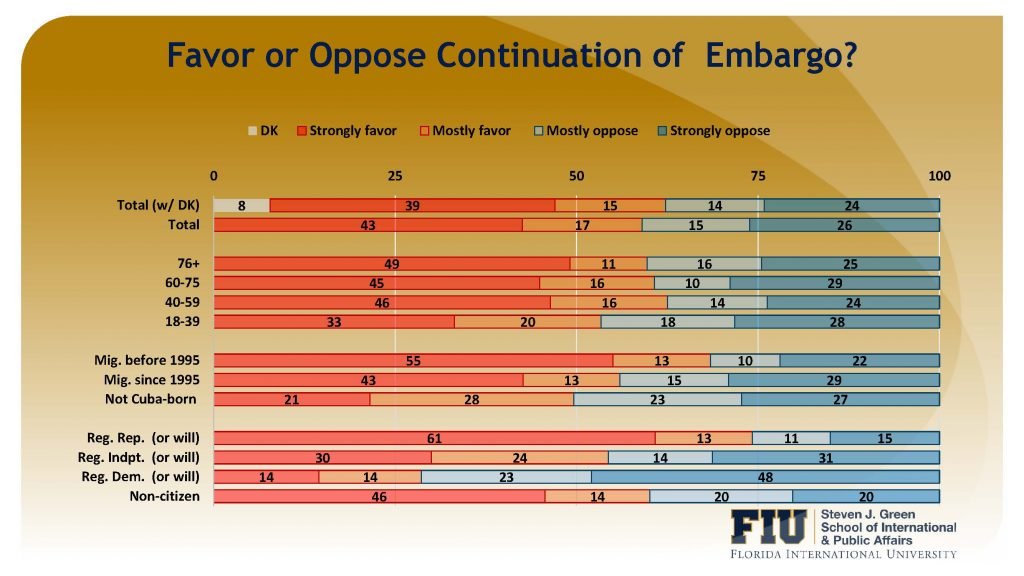 But a majority of almost 75% approve of the sale of food to Cuba (62%) and medicines (71%). According to the authors of the survey, this is due to a humanitarian attitude since food and the supply of medicines are going through a severe crisis on the island. “The priority is always the family, and Cuban Americans’ priority is still to help them,” Grenier explained at the presentation. 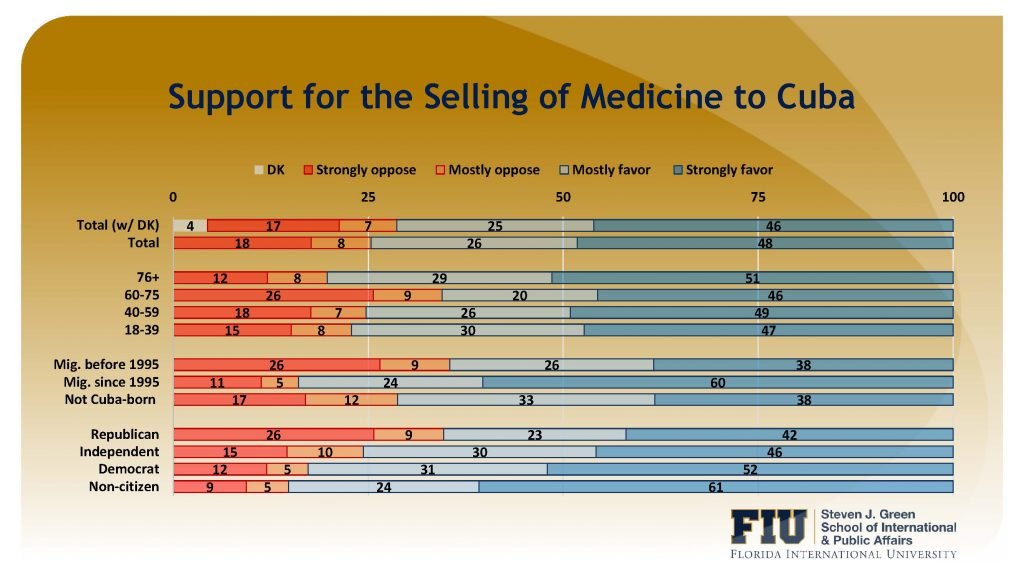 The big conclusion is that Trump’s policy toward Cuba has permeated Cuban Americans. Since the last survey, relations between the two have not followed the path of compromise.

As the director of the Cuban Research Institute, Jorge Duany, says, the community still supports participation policies that it regards as the “carrot and stick,” where the protagonist is the “stick.” And it is something unanimous within all generations.

Young people in the face of the current reality

For example, “young people between 18 and 39 years of age support a policy that favors the well-being of the population, but also, as in other polls, they speak out for maintaining a double stance of tightening and loosening screws. 51% of young people support the interruption of cruise ships, 73% believe that Cuba policies should exert maximum pressure to lead to a regime change,” Duany said.

As the expert says, “one thing that has happened is that we thought that the old generation was going to disappear and would be replaced by a less conservative one, but this has not been the case.” 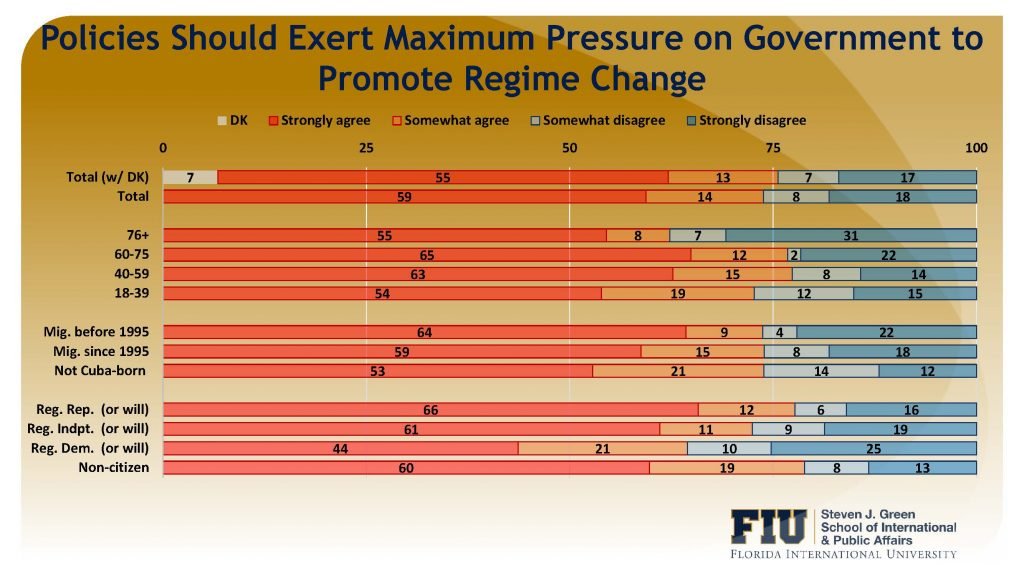 Return to the past

This time the findings suggest that there is a return to traditional hardline views in U.S./Cuba relations. While political and social participation policies still have advocates, support for the manipulation of the embargo “stick” and Cuba’s isolation from the U.S. economy has increased among Cuban Americans as the second and third generations are pushing for hope for participation, while more established residents insist on a tougher stance.

The return to hardline points of view could be driven by the slow pace of change on the island, both after Obama’s visit (2016) and after Miguel Díaz-Canel became president two years ago. Or because of the hostile narrative that currently surrounds U.S./Cuba relations within the United States.

Whatever the reason, the demographics of the Cuban-American community in South Florida continue to change as many of their attitudes toward interstate relations remain in conflict, Grenier explained when presenting the poll in a video conference.

Watching out for relatives in Cuba

There are, however, things that changed in the last poll and others that were maintained. One is the tendency to favor the economic well-being of the Cuban people. All sectors―ages, political parties, independents and those not born in Cuba, an average of almost 75%―approve measures in this regard. 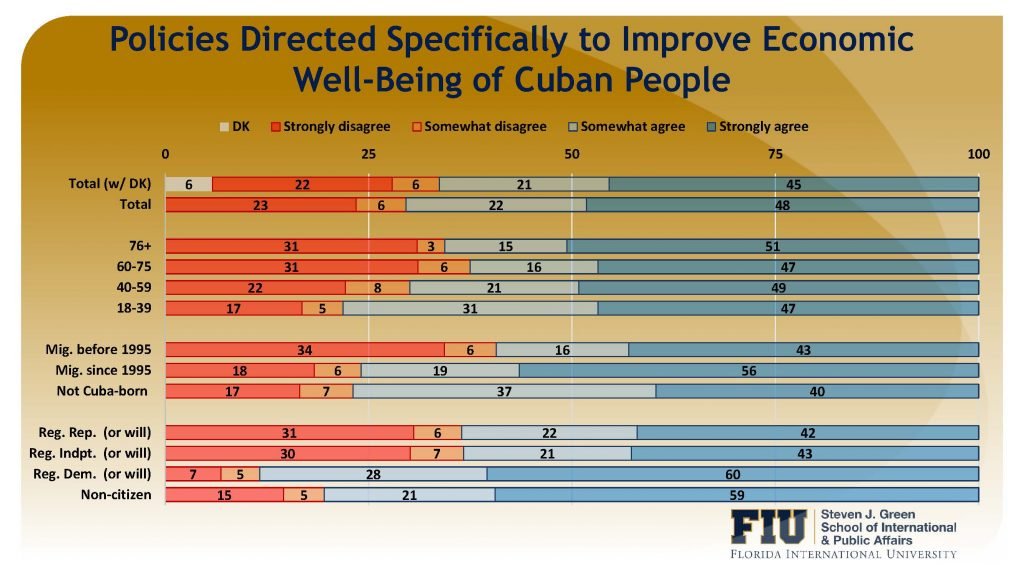 This implies maintaining diplomatic relations (55%), re-issuing visas to travel by the United States embassy in Havana (56%)—something opposed by 50% of those who emigrated before 1995—, re-establishing the flights to all airports in Cuba and revoking the suspension of the family reunification program, an issue not supported by emigrants over 76 and Republicans. To a greater or lesser extent, the other groups agree with that because they still have relatives in Cuba. 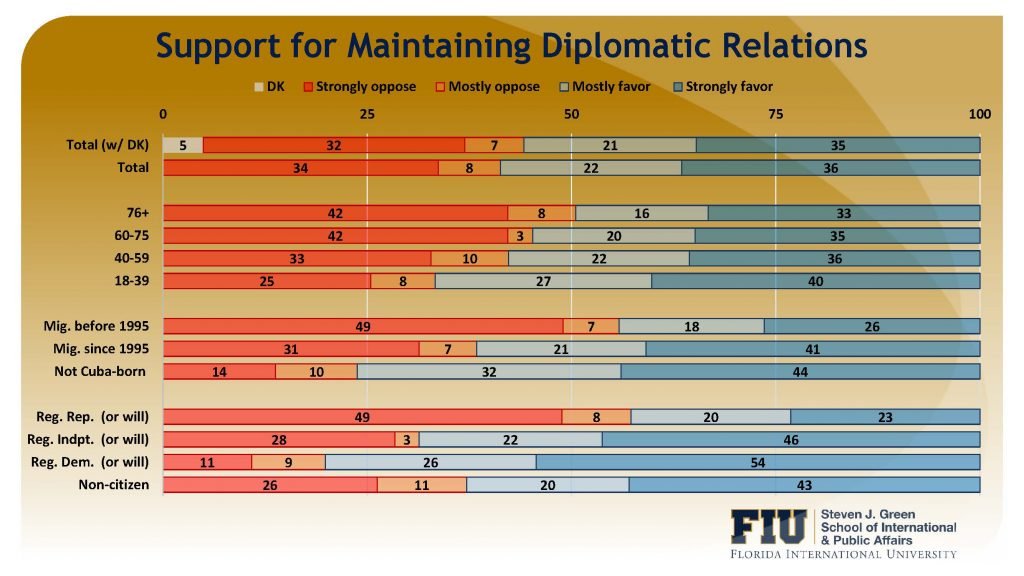 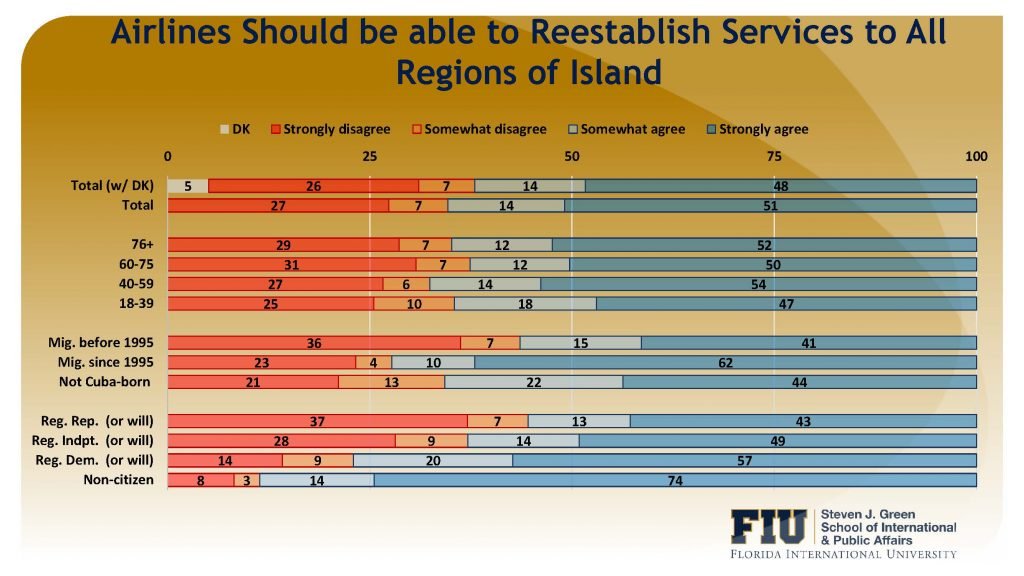 The issue of remittances remains controversial. 53% oppose it, less among individuals between 40 and 59 years of age (55%), those who emigrated after 1995 (66%) and those who are not citizens because they arrived more recently and continue to be the financial pillar of families they left behind (67%). 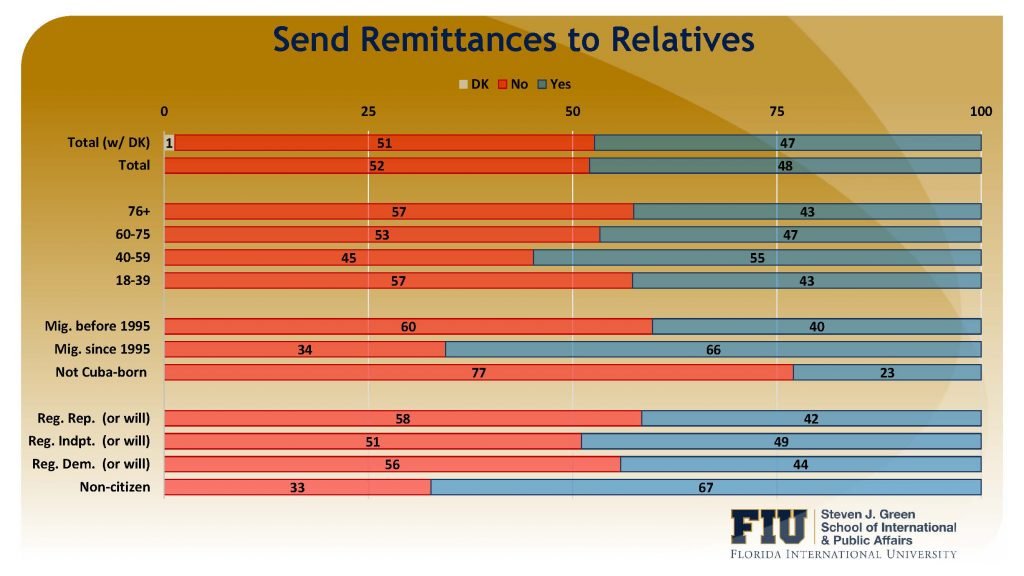 An interesting detail is that with the exception of 51% of young people between 18 and 39 years old, who approve of the reactivation of the “wet foot/dry foot” policy, all the others (by age, year of arrival and parties) oppose that policy, created by Bill Clinton and repealed by Barack Obama. 52% still oppose Cuban Americans being able to travel freely to Cuba.

Another interesting aspect is that among all the major topics—the economy, health, race, immigration, policy towards China, and the Cuban political situation—the latter is the one that arouses the least interest of all. 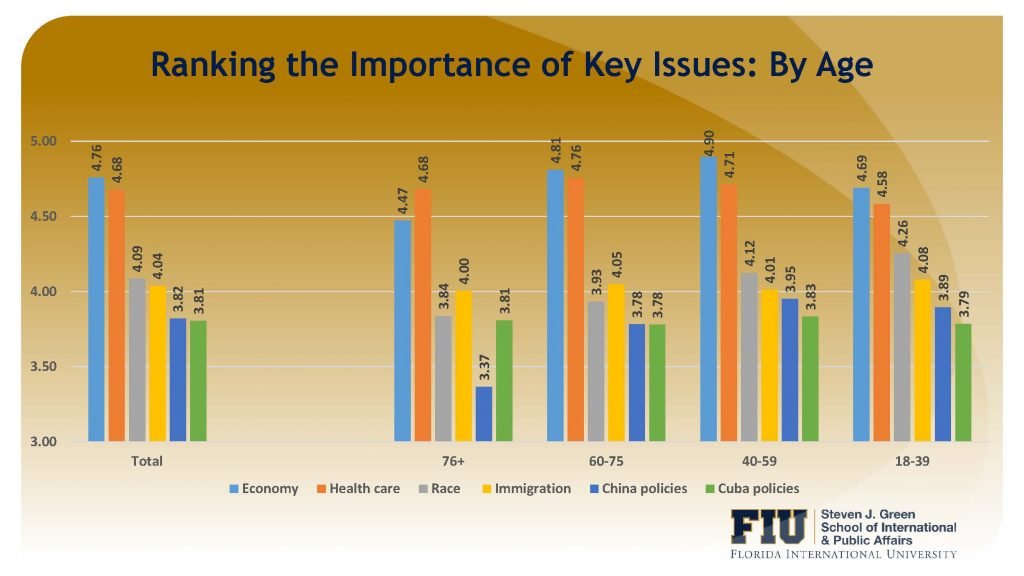 “The previous poll had already shown that the issue of Cuba was not number one among Cuban Americans. It makes sense because it is a community that has been here for sixty years and has moved towards national problems, much more interesting now, such as the next presidential elections,” Professor Duany explained to OnCuba.