The creator of the Versailles Restaurant, Felipe Valls, says that direct sales to the street triggered sales and created a space to socialize. 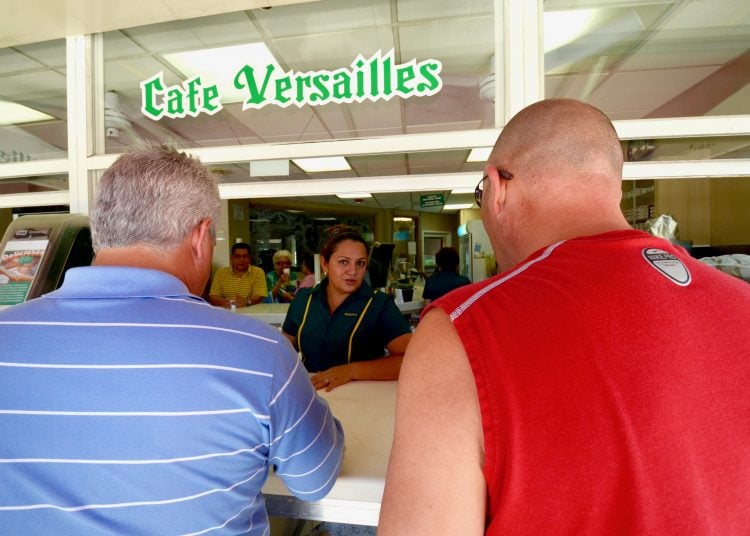 Although there are those who call them windows, the windows are perhaps the Cuban invention that has had the most social impact in Miami. And also in the community life of cities with a large Hispanic population.

These are small or medium-sized windows, transformed into counters that usually face directly onto the street. All kinds of sweets, croquettes, small sandwiches and, above all, coffee are served in them. Many liters of coffee throughout the entire day. Some take the opportunity to smoke a little cigar while savoring the “aromatic drink,” as it is customary to say in Cuban journalism on the island, because inside you can’t smoke.

But the window is also a place for socialization, meetings where friendships are consolidated and new ones are forged. I met my best friend in Miami at the window of the Versailles Restaurant, on the famous Calle Ocho in Little Havana. This is a place also frequented (or did so before the pandemic) by people who coming out of the movies or the theater, sporting events or family parties. “The Versailles window has an interesting feature in these turbulent times in politics. People disagree as only Cubans know how to do it, but curiously they don’t raise their voices,” says Dionisio Almeida, a Spaniard who’s been living in Miami for 40 years and who from day one made the window into a kind of office.

Marucha, one of its employees, disagrees. She says she has had to force people to lower their voices because sometimes they raise them and don’t realize it. “But they aren’t offended, they apologize,” she says. In fact, what she’s liked the most since she arrived from Cuba, via the Mariel sea bridge, is that there are groups that treat each other like a family, of which the employees are part. Many clients, she says, when they go on a trip they always return with a small gift for the employees at the window. The employees in that part of the restaurant, at least in Miami, are almost always women, here in the rest of Little Havana, the center of the city, and even in Miami Beach, where Cuban restaurants have a popularity that catches the attention of many people because these are neighborhoods with mostly Anglo clients.

In historical terms, no one knows for sure when the popularity of the windows began. But a few years ago, The Miami Herald did a small study. It interviewed the founder of the Versailles, Felipe Valls, who told how the window was something he invented for his establishments, La Carreta and Versailles, “as a necessity to sell more onto the street. So we sold more coffee,” he explained.

The window ended up revolutionizing the coffee industry. At least in Miami and in cities like Tampa and Union City, “Cuban coffee” became popular. Of course we are talking about the style of brewing the coffee, not the coffee that comes from the island (the embargo doesn’t allow it). It is served with the sugar already included, after churning it and making a creamy mixture before filling the cup. And very hot. The windows also serve other variants such as the cortadito, adding a pinch of milk, and coffee with milk, in which the proportion of the latter is higher. For a group of friends, a brewed pot of coffee is enough for about four or five people.

The popularity of the windows and the increase in coffee consumption have led to the development of the product’s brands. In the Versailles they use between 100 and 110 kilograms daily. It must be the establishment with the highest consumption in the city. To lower the price of the product, Valls created his own brand: Café La Carreta, a blend of Colombian Arabica with stronger Central American coffee. It doesn’t wake up the dead, because it would be a miracle, but it’s a bit like it.

So far, only hurricanes have forced the windows to close. Their prime time is usually dawn. They serve breakfast for workers, taxi drivers, office workers, police officers and firefighters who are on their way to work and barely have time to stop at one of the windows. Quickly, and standing, they stop to eat breakfast with a guava cake, croquettes or cakes with a small cup of coffee or coffee with milk.

But the pandemic has been a threat for the windows. The mayor of Miami-Dade, Carlos Giménez, had the idea of closing the windows due to the advance of COVID-19. When he launched the idea, it was a certain disaster. “He doesn’t want to be elected, he’s raving crazy, we are going to fight him more than Fidel Castro (in Miami everything has to do with Fidel, even the windows),” said Benito García, a kind of emperor of the Versailles window. Fortunately, someone had the good sense to warn the mayor, who is going to the elections for federal congressman in November, about the possibility of losing in the elections.

The windows are a heritage of Hispanic cities in the United States. But the Cubans claim their authorship and heritage. As some say, if before their arrival Miami was “a country town,” without them it would not be a “civilized” town.

“During all these years I have seen couples make marriage proposals at this window,” recalls Marucha. “And christening celebrations. They come here from the church.”