A Declaration by the Council of Churches of Cuba calls attention to the "extraterritorial nature" of the Helms-Burton Act that attacks "any country that maintains commercial relations with Cuba." 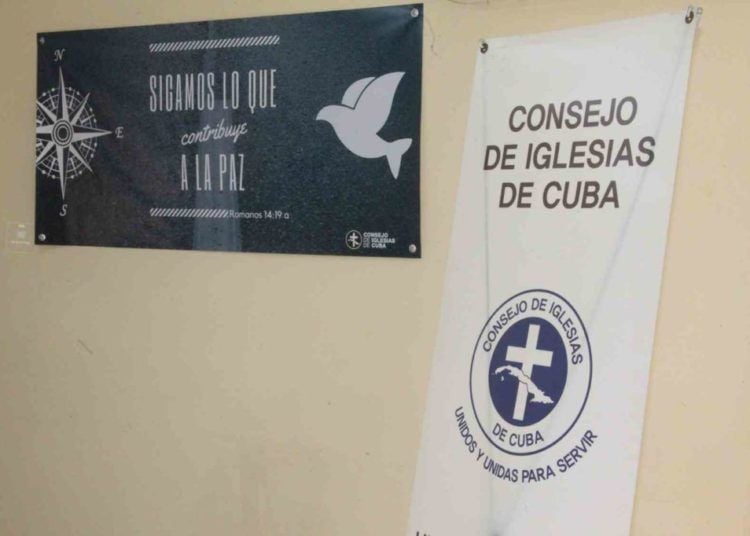 In a statement on Wednesday, the Council of Churches of Cuba (CIC) described as a “worrying threat” the announcement that the U.S. aims to activate a title of the controversial Helms-Burton Act that would allow Americans to claim property confiscated after the Revolution.

The group, which comprises several branches of Cuban Christianity outside the Catholic Church, rejected Washington’s decision to shorten from six months to 45 days the usual term for reviewing Title III – currently suspended – of the legislation passed in 1996.

This change of direction of the United States “is a worrying threat of aggression against the independence, sovereignty and dignity of our Cuban people; as well as against all the countries of the world,” said the text, signed by the president of the CIC, the Reverend Antonio Santana, and published in several official Cuban media.

Cuban Christians called attention to the “extraterritorial nature” of the Helms-Burton Act that attacks “any country that maintains commercial relations with Cuba.”

“One of the excuses is the false accusation of lack of democracy in Cuba,” reads the statement, which defends the Cuban government as “fair, legal and legitimate.”

Title III of the Helms-Burton Act, which strengthened the U.S. embargo on the island, has been suspended periodically since its creation in 1996 by all U.S. administrations, from that headed by Democratic President Bill Clinton (1993- 2001) to the current one, led by Republican Donald Trump.

On January 16, a day before the deadline to notify Congress of its decision on the matter, U.S. Secretary of State Mike Pompeo announced that he will maintain the suspension only for 45 days, instead of the usual period of six months.

This legal provision specifies that Americans ̶ among them nationalized Cubans ̶ can sue before U.S. courts the companies of any country that benefit from the properties that were nationalized by the Cuban government after the coming to power of Fidel Castro six decades ago.

To decide whether to maintain the suspension of Title III, Washington will take into account the “efforts” of the United States “to accelerate the transition to democracy in Cuba” and assess “factors such as the Cuban regime’s brutal oppression of human rights and fundamentals freedoms.”

It will also examine the “indefensible support” that, in its opinion, Cuba offers to “the increasingly authoritarian and corrupt regimes in Venezuela and Nicaragua.”

“We will not allow political blackmail, we have sufficient and legitimate reasons and truths to face so much hostility and contempt,” he affirmed through Twitter Díaz-Canel. He also said that with this new move “the U.S. government is showing its contempt for the rest of the world.”

Complete text of the Statement:

The announcement made by the Trump administration on January 16, 2019, regarding shortening the deadline for the effective application of Title III of the law known as Helms-Burton to only 45 days instead of the 180 days previously prescribed, is a worrying threat of aggression against the independence, sovereignty and dignity of our Cuban people; as well as against all the countries of the world.

This law, adopted by the U.S. Congress in 1996, was conceived to be applied extraterritorially against Cuba and against any country that maintains commercial relations with Cuba, in an attempt to impose the April 6, 1960 thesis of Deputy Assistant Secretary of State for Inter-American Affairs Lester D. Mallory, which is actually a corollary of the Monroe Doctrine that seeks ̶ in Mallory’s own words ̶ to overthrow a just, legal and legitimate government, and that says:

“The majority of Cubans support Castro…. There is no effective political opposition…. The only effective way to make him lose internal support (to the government) is to provoke disappointment and discouragement through economic dissatisfaction and hardship…. All possible means must be put into practice quickly to weaken economic life…by denying Cuba money and supplies in order to reduce nominal and real wages, with the aim of provoking hunger, despair and the overthrow of the government.”

With the Helms-Burton Act, the U.S. Congress hoped to be a universal Legislature, attributing to itself the function of dictating to the rest of the countries of the world what they “can” or “cannot” do; just like Mallory’s corollary tries to prevent the compliance, for very political reasons, of what was proclaimed by the psalmist when he says:

“Truth shall spring out of the earth; and righteousness shall look down from heaven.  Yea, the Lord shall give that which is good; and our land shall yield her increase. Righteousness shall go before him; and shall set us in the way of his steps.” (Psalm 85, 11-13)

One of the excuses is the false accusation of lack of democracy in Cuba. At this point we remember the words of a famous American, the late President Abraham Lincoln, when he defined democracy as: “The government of the people, by the people, for the people, shall not perish from the earth.”

And the word of the prophet inspires us, when he says:

That the people of God in Cuba are and will always be working with the people, for the people and for the beloved Cuban people.

COUNCIL OF CHURCHES OF CUBA