Bruno Rodríguez denounced this Monday to the press that the U.S. government, as host of the summit, has excluded Cuba from the preparations for the meeting, and regretted that, if it is not finally invited, the island will not be allowed to contribute from its perspective to the regional debate on the issues that will be addressed at the meeting. 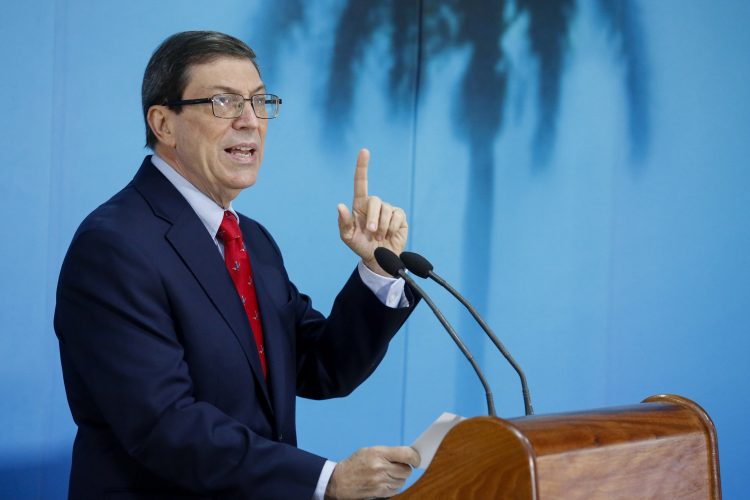 Cuban Foreign Minister Bruno Rodríguez presents statements to the press at the headquarters of the Ministry of Foreign Affairs on April 25, 2022. Photo: @CubaMINREX/Twitter.

Cuban Foreign Minister Bruno Rodríguez considered the island’s possible exclusion from the ninth Summit of the Americas, which will take place next June in the U.S. city of Los Angeles, as a “serious historical setback.”

In statements to the press, which were broadcast live on state television, Rodríguez denounced that the United States government, as the organizer of the summit, has excluded Cuba from the preparations for the meeting, even though it “misleads” public opinion by saying it hasn’t decided on invitations yet.

In this sense, he urged Secretary of State Antony Blinken to say whether his government will allow or veto Cuba’s participation, and pointed out that, if the absence is confirmed, it would be a “politically motivated decision with no other support than false accusations and double standards.”

For the Cuban foreign minister, the United States, as the host country of the meeting, “has no right to impose arbitrary exclusions,” which he considered “undemocratic,” nor to exert “extreme pressure” on “numerous governments in the region,” which, he said, are opposed to the island being left out of the summit.

“The looming exclusion of Cuba would constitute a serious historical setback in relation to the two previous summits, in which Cuba participated on an equal footing,” commented Rodríguez, who assured that it would be “surprising” if President Joe Biden “strays from the policy of the government of which he was already vice president,” which for the first time invited the island to a summit in 2015, and “even more amazing and paradoxical” that he also not follow in the footsteps of the Trump administration, which also invited the island to the Lima summit in 2018.

The Cuban foreign minister commented that the Los Angeles Summit will have among its central themes health and migration issues, as well as democracy and human rights, on which, he said, regional plans that must be presented are being negotiated “in an opaque manner” in the meeting, and that until now they have remained “with their backs” to international public opinion and to countries of the continent such as Cuba itself.

In this regard, he regretted that, if finally excluded, the island would not be allowed to contribute to the regional debate on these issues from its perspective, nor cooperate in areas in which it has recognized collaborative experience, such as health.

“The ninth Summit of the Americas could still be an opportunity if, in an inclusive manner and on equal terms for all countries, it debated, without exclusions and with sincere commitment, the most pressing problems that affect the continent,” he pointed out.

Rodríguez affirmed that the United States “does not have any moral authority to set itself up as a model” on issues that will be addressed at the meeting, such as human rights, and reiterated the accusations against the negative impact of the U.S. embargo on the island, its population and economy. In this sense, he denounced its political use by Washington during the pandemic and also as a trigger for the current migratory flow.

On this particular issue, he considered it “incoherent” that the U.S. authorities “privilege” and provide “constant encouragement” to the irregular migration of Cubans and, at the same time, pressure third countries to impose transit visas and other measures to stop it. Also, that they fail to comply with the bilateral migratory agreements and the quota of 20,000 visas for migrants from the island, despite the “positive sign” of the recent round of talks on the subject between the two countries.

On these and other issues, the foreign minister offered the White House the opportunity to “discuss” in a “bilateral, multilateral manner and even at the summit itself” in Los Angeles, and, in a general sense, pointed out that Havana’s “genuine efforts to foster dialogue, links and cooperation” between Latin America and the United States.

Finally, Rodríguez assured that Washington “should understand that the Latin American and Caribbean region has changed forever” and “profoundly” thanked the countries that, he said, maintain a “courageous position” and advocate that the island not be excluded from the summit.