The Cuban Americans for Engagement (CAFE) group, along with other organizations and Cuban Americans, sent a letter to the President of the United States in which they ask him to consider taking new measures in favor of relations between the two countries. 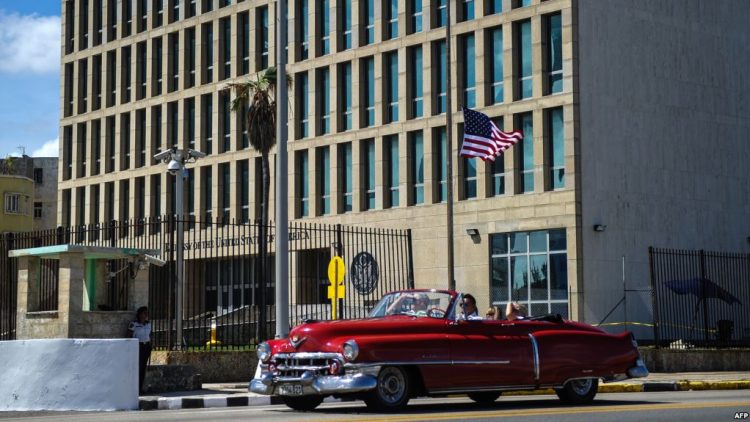 Embassy of the United States in Havana. Photo: AFP.

A group of organizations made up of Cuban Americans and Americans in favor of a rapprochement between the governments of Cuba and the United States published this week a letter — open to signatories who want to join in the letter — that they will soon send to President Joe Biden asking him to define actions to reverse the measures and policies established during the Trump administration.

The letter welcomes the resolutions recently taken to restore consular services in Havana, noting that although the changes “are limited to an increase in staffing and the resumption of visa processing, they represent an essential distancing from the unjust policy and cruel initiative initiated by the Trump administration, which has brought severe difficulties to the Cuban people.” Along with this, it underlines that there are several campaign promises that have not yet materialized.

Reversing the harsh initiatives of Trump’s policy towards Cuba, reestablishing the sending of remittances and enabling Cuban Americans to travel to more provinces on the island, in addition to Havana,” are some of the actions proposed by the U.S. president before assuming his mandate and that have not yet materialized.

The letter underlines that, despite the fact that some private entrepreneurs have undertaken initiatives to circumvent the current restrictions regarding the sending of remittances, these proposals, promoted by the group itself, have not yet achieved the regular flow of remittances that came to exist before for Trump took office. In the same way, they warn that “the comprehensive nature of the sanctions” makes any operation difficult “since those who tried to send remittances are not clear if they are violating the law. Also, the fees involved are incredibly high for senders.”

Regarding travel restrictions, the signatories point out that the sanctions still in force make it difficult for Cuban Americans to meet with their families, a situation that mainly affects families who do not live in Havana. On the other hand, it points out that travel restrictions also affect the private sectors of both countries, limited in a satisfactory exchange “that could empower Cuban civil society” and boost the economy, determined by a serious economic crisis exacerbated by the pandemic.

“The current COVID-19 pandemic has had a great impact on the world economy, and these sanctions have augmented the negative consequences” in the country, immersed in an economic crisis where the Trump administration’s intensification of measures against the Cuban government plays a role.

Regarding the events experienced in the last year, the signatories warn: “the Cuban government does not delude us.”

The group has “closely followed the July 11 protests on the island and the recent unjust convictions of some of those who participated in them. The vast majority of us have expressed our support for the Cuban people and their right to protest,” but they warn that “a policy of isolation, far from promulgating and educating members of Cuban civil society about human rights, prevents them from learning from the experiences of their civil society counterparts in the United States.”

The letter insists that even if Cuba and the United States do not become the closest of allies, “there are political areas in which both countries can work together to promote mutually beneficial objectives as they have done in the past.” On this point, they highlight issues of interest in which bilateral work is maintained, such as migration, the environment and law enforcement issues in the area of ​​drug control.

“We urge your administration to take the necessary steps to advance these goals,” the message ends.