Havana defends a “peaceful and lasting” solution to the Palestinian-Israeli conflict based on the creation of two different states and Palestine’s total sovereignty. 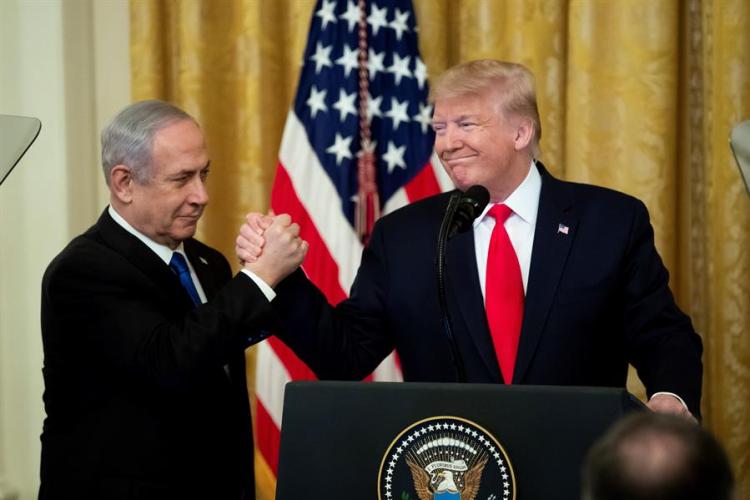 U.S. President Donald Trump (r), along with Israeli Prime Minister Benjamin Netanyahu (l), during a ceremony at the White House in Washington, where Trump described his peace plan for the Middle East as a “realistic solution of two States,” although he proposed to reserve for Israel part of the West Bank and Jerusalem as its “integral capital.” Photo: EFE/Michael Reynolds.

Cuba repudiated this Wednesday the “biased and misleading” peace plan announced by U.S. President Donald Trump for the Middle East, considering that it underpins Israel’s position in the disputed territories and violates the rights of the Palestinians.

“I reject the biased and misleading U.S. peace plan that enshrines the Israeli occupation and violates the inalienable right of the Palestinians to have their own State on the pre-1967 borders, with East Jerusalem as capital and the return of refugees,” Cuban Foreign Minister Bruno Rodríguez wrote on Twitter.

Hours before and also in his social network account, Rodríguez reiterated his criticism of the U.S. government for its desire for “imperialist domain,” its way of treating Latin America and the Caribbean as a “subordinate region,” while condemning Washington’s “aggressiveness” against Cuba.

Havana defends a “peaceful and lasting” solution to the Palestinian-Israeli conflict based on the creation of two different states and Palestine’s total sovereignty.

The proposal announced by Trump supports Israel’s annexation of the Jordan Valley, in addition to settlements in the West Bank, and presents a limited sovereignty of a hypothetical State of Palestine.

The plan proposes a fragmented Palestinian state with Israeli settlements in its interior connected to the Israeli state through corridors that divide the territory, which would be isolated from the outside except at the border of the Gaza Strip with Egypt.

Trump initially indicated that Jerusalem would continue being Israel’s “integral capital,” but subsequently pointed out that the Palestinians could install theirs in the eastern part of that city, occupied by Israel in 1967 and annexed in 1980.

Panamanian and Cuban authorities seek to facilitate trips to Panama