“With its deplorable record on human rights, the United States government and its secretary of state would do well to refrain from judging Cuba and other countries,” Foreign Minister Bruno Rodríguez said on Twitter. Antony Blinken criticized the day before, also from Twitter, the convictions of demonstrators in July 2021. 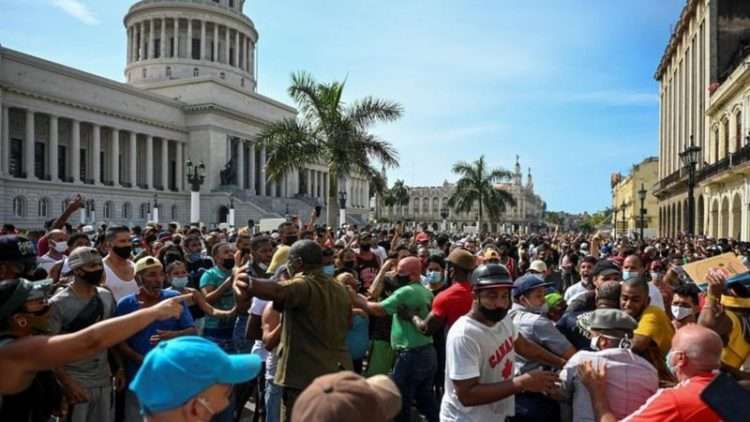 Protests in front of the Havana Capitol on July 11, 2021. Photo: Getty Images via BBC/Archive.

The statements respond to Secretary of State Antony Blinken, who criticized the day, before also from Twitter, the prison sentences and other punitive measures against more than 550 demonstrators of the July 11 anti-government protests in Cuba.

“As we near the #11J anniversary, those protestors who remain detained should be returned home to their families,” Blinken said.

Rodríguez affirmed this Wednesday that they are “fabricated legends and gross slanderous campaigns.”

The Cuban Attorney General’s Office has issued 76 final sentences against 381 people for the protests and the most recurrent crimes are sedition, public disorder, attack and contempt.

Relatives of those convicted and NGOs have criticized these actions, alleging lack of guarantees, fabrication of evidence and high sentences.

The Cuban regime has condemned over 550 protestors to more than 4,000 combined years of prison or other punitive measures since the historic July 11, 2021 protests. As we near the #11J anniversary, those protestors who remain detained should be returned home to their families. pic.twitter.com/bBYaoAc0TC

The July 2021 protests were the most massive that the Cuban government has faced since 1959. They took place at the peak of the COVID-19 pandemic and the country’s severe economic crisis, with long queues, shortages of basic products, high inflation and prolonged power outages.

The Cuban government has described them as “riots,” although it came to recognize the existence of “legitimate” claims among the protesters. In addition, it linked them from the beginning with a campaign that, it assures, is organized and financed from the United States in order to promote a “regime change” on the island.