The Cuban-Americans, Venezuelans and Nicaraguans, whom Trump has courted since the 2016 campaign with promises to restore freedom to their countries, so far unfulfilled, can make a difference in the tight elections in Florida. 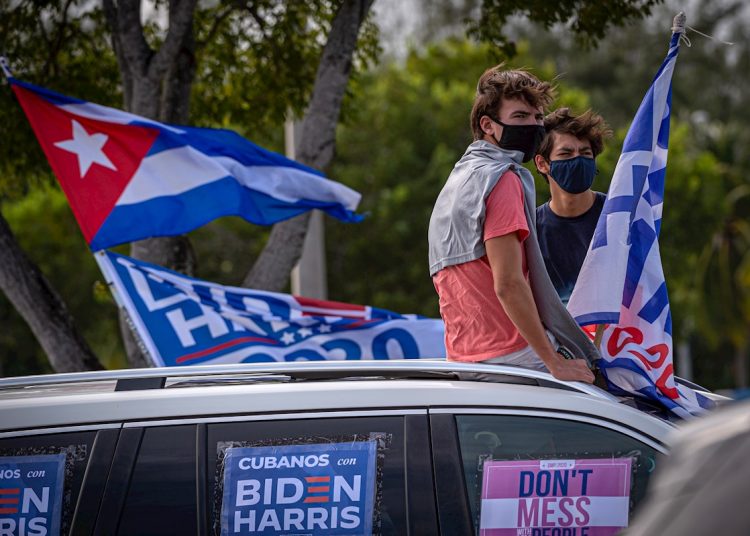 Some young people listen to the speech of former United States President Barack Obama, sitting on the roof of a car decorated with posters that say “Cubans for Biden Harris,” during a rally in support of Democratic presidential candidate Joe Biden, in the Biscayne Campus of Florida International University (FIU) in Miami, Florida. Photo: Giorgio Viera/EFE.

They are not afraid of the specter of “socialism” that is rattling President Donald Trump’s campaign to subtract votes from the Democrats and they are betting on a fairer country model: they are the Cubans in favor of Joe Biden, a minority that has shown its teeth.

“That’s nonsense,” Guillermo Grenier, professor and president of the Department of Sociocultural and Global Studies at Florida International University, tells EFE. He is not taking sides with a political party, but analyzes the accusations that Biden intends to turn the United States into a “socialist” country.

The ghost of socialism

Foolish or not, those claims seem to have had an effect on Cuban-American voters in Florida, among whom Trump has a 48-point advantage, according to a poll published this Thursday by the Telemundo channel.

Cuban-Americans, Venezuelans and Nicaraguans, whom Trump has been courting since the 2016 campaign with promises to restore freedom to their countries, so far unfulfilled, can make a difference in the tight elections in Florida, where the two candidates are virtually tied.

“Joe Biden has been in American politics since 1972 and no one with radical ideas stays this this long in politics,” Grenier affirms.

For this expert in Cubans’ participation in U.S. politics it seems “ironic” that the exiles praise the Cuban Constitution of 1940, which was much more advanced socially than what the Democratic Party proposes today, and at the same time they consider Biden socialist and mostly back Trump.

A businessman and a writer with Biden

Real estate businessman Jorge Pérez, one of the most successful Cuban-Americans, tells EFE that neither Biden nor Kamala Harris, the vice-presidential candidate, “have a hair of socialists and less of communists” and those “false and stupid accusations” are a “desperate” measure of the Trump campaign.

They want to “create fear, especially in South Florida where people have been told that with Biden the U.S. will become like Cuba, Venezuela or Nicaragua. Absolutely ridiculous,” says Pérez, who claims to be “100% with Biden.”

The well-known writer and journalist Carlos Alberto Montaner, who since he went into exile as a result of the Cuban Revolution has harshly criticized the Castro regime, has made a video in favor of Biden.

“Sometimes I vote with the Republicans and sometimes with the Democrats. I have dedicated my life and have written several books against socialists and communists, but in this election, I want to emphatically say that Joe Biden and Kamala Harris are neither socialists nor communists,” Montaner said.

“I have been in exile for many years and I know perfectly the friends of freedom. They are that,” he adds.

Neither Pérez nor Montaner hide that they do not like Trump’s attitude or way of governing.

“Trump is a dangerous demagogue who has been against immigration (which is what has made the United States), without caring for the environment, with an incredible bias towards wealthy businessmen, against public health within everyone’s reach, against the right of women to have an abortion,” emphasized Pérez.

“With him, the discrepancy between the poor and the rich will continue to grow. He’s a disaster for the country and the democratic world,” the businessman and art collector said.

Montaner has given numerous examples in his articles of why he does not want Trump for four more years in the White House.

He doesn’t like the current president’s “character as an arrogant and overbearing person who lies or exaggerates,” who constantly shouts and interrupts the adversary in a debate, his relations with the Russian president, Vladimir Putin, and the North Korean leader, Kim Jong-un, and his “scientific denial” during the pandemic.

For the same reasons, Pérez urges to vote for Biden and defends the idea that Latinos will be important in these elections.

“It is a minority that grows more than any other. As immigrants and many times without rights, we have to strongly support Biden,” he says.

As a businessman and in the same sector as Donald Trump, he believes that Trump has been “good for the rich, bad for the middle class and the poor. For example, my taxes have been lowered a lot and I have become much richer,” he stressed.

“The gap between the very rich and the others has increased and the poverty rate has risen more than ever,” said Pérez, who doesn’t believe that Trump has done a great job with the economy.

“Unemployment is still very high and everything that had been achieved during Obama (he left the country in a very good situation), has been disrupting by him,” he said.

A Bay of Pigs veteran for Biden

Among the Cubans for Biden who have attracted the most attention is a veteran of the failed Bay of Pigs invasion, Santiago Morales, who was captured and spent 18 years in prison in Cuba.

Morales has also recorded a campaign video, paid for by the political action committee of Mike Bloomberg, former mayor of New York, asking Cuban-Americans to vote for Biden.

“I, like many other Cubans who vote for the Democrats, are neither socialists nor communists,” the 78-year-old veteran says in a video titled We Are Patriots in which he calls Trump a “little character” and compares him to Fidel Castro and Hugo Chávez.

The association that groups together the veterans of the 2506 Bay of Pigs Brigade has given its support to Trump in these elections.