All those who are caught by the authorities end up being returned due to the end of the “wet foot-dry foot” policy. 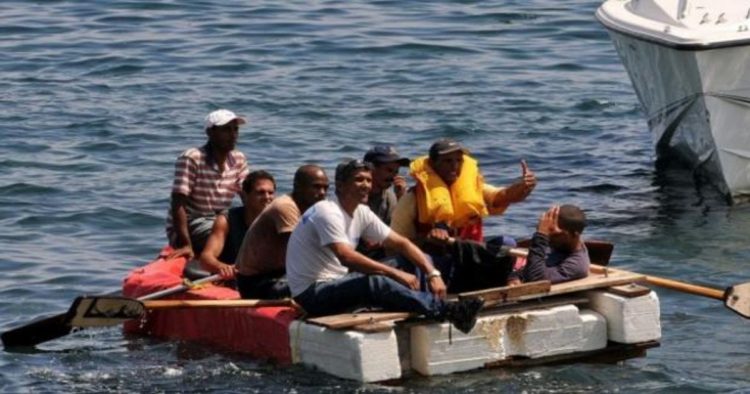 At least four Cuban rafters arrived in the Florida Keys this Monday. But Customs and Border Protection is still looking for more because it suspects the number is a bit higher. It can be between 8 and 9 people, a spokesman confirmed.

The group touched fall in Islamorada in the early morning hours, according to Adam Hoffner, head of the agency’s Miami Division.

The arrival came five days after Florida Fish and Wildlife Conservation Commission (FWC) agents arrested two men in the Florida Keys in a boat overloaded with gasoline, with GPS consoles on board, as well as a manual GPS, a satellite phone, a gasoline pump and a large quantity of water and electrolyte drinks, more than enough evidence of an attempt to smuggle illegal immigrants from the Caribbean island.

At the moment there are no more details of Monday’s arrival. Both incidents took place amid an increase in maritime migration from Cuba to South Florida, not seen since the days of the so-called “wet foot-dry foot” policy, which allowed Cubans to touch land to remain in the United States and apply for permanent residence after one year and one day, in accordance with the Cuban Adjustment Act.

Cubans intercepted at sea are returned to the island. The Obama administration abruptly ended the wet/dry foot policy in January 2017 in one of the last international policy decisions it took after resuming full diplomatic relations with Cuba.

From October 1, 2017 to September 2018, for example, the Coast Guard detained 1,468 Cubans at sea trying to reach U.S. shores. In 2020, the Coast Guard only apprehended about 50 migrants in the Florida Straits.

However, as the situation in Cuba deteriorated, Cubans began to leave the country in large numbers. From October 1, 2020 to September 2021, the Coast Guard intercepted 838 Cubans at sea. But the number has skyrocketed since the start of the new fiscal year.

In the last two weeks, the Coast Guard has returned to Cuba more than 120 people who were detained at sea in 17 different interdictions.

Last Friday 70 people were repatriated and another 55 this Monday.