Gray is a color present in the architecture of the Cuban capital, from the Malecón seaside wall to the stones of the centuries-old buildings of the Historic Center. 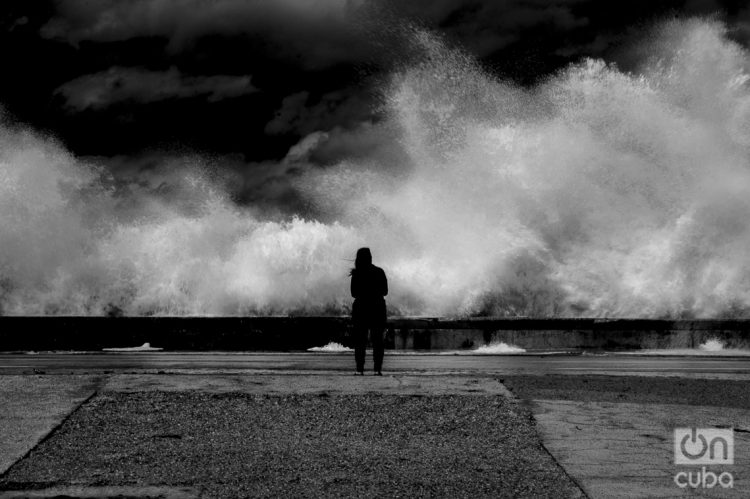 “The cure for anything is salt water: sweat, tears, or the sea.” (Isak Dinesen). Photo: Otmaro Rodriguez

Imagine waking up one day and there is no color. Imagine going out to the streets of Havana and noticing the reign of gray tones, the existence of a completely faded city, devoid of colors and blue, red, yellow, green tones…

It would be, to say the least, dramatic to live in such a circumstance of seeing life in black and white. Of course, we are talking about a dystopian scenario, but there are not a few who from time to time prefer to enjoy black and white, almost always from an artistic point of view.

Sometimes human beings need simplicity, the simple and the mundane to disconnect from the overwhelming world in which we live; even more than one person has taken the path of simplicity as a lifestyle, in contrast to the hectic environment that often surrounds today’s society.

We also need the simple to be able to better understand phenomena and daily situations, to give “another color” to what surrounds us, because life sometimes appears to us in grayscale and it is necessary to accept it, learn to live with those moments and “look at the bright side of things.”

The exercise of seeing what surrounds us in black and white could even be relaxing. Imagine a minimalist and peaceful Havana, full of details for those who know how to observe from another prism.

Gray is a color present in the architecture of the Cuban capital, from Havana’s Malecón seaside wall to the stones of the centuries-old buildings of the Historic Center, passing through the ruins of columns in various areas that have been mistreated by the passage of time, as if we lived in a bygone era, in a movie from the first half of the last century, but without the splendor that surrounded certain spaces in the city.

Dust and stone, two elements that we frequently find in this city where the weather plays its tricks and gives it a certain nostalgic air on cloudy days, reinforcing the mysticism that surrounds it when the sky is filled with clouds and dulls the light of the sun. Then the gray stands out over the “city of columns,” as writer Alejo Carpentier called it.

At that moment, poetry takes over Havana, because in absence and sadness there is too much palpable poetry for a sensitive soul to capture the aura of this city trapped in time; Hence, not a few point out that the Township de San Cristóbal is photogenic and insist on perpetuating in images the centuries-old capital of all Cubans.