This is stipulated in Resolution 177/2020 of the Central Bank of Cuba (BCC), according to which, as of next January 1, “new deposits of convertible pesos are not allowed in the accounts in that currency of individuals” and “any cash withdrawal from these accounts is made in Cuban pesos.” 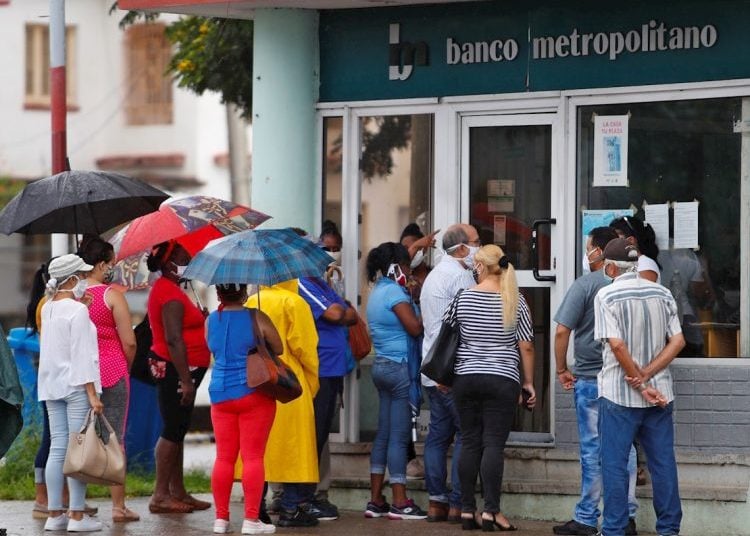 Starting next January 1, confirmed this Thursday by President Miguel Díaz-Canel as “day zero” of the monetary and exchange rate reorganization on the island, Cubans will have 180 days to exchange convertible pesos (CUC) for Cuban pesos (CUP) in banks and exchange houses, according to the current rate of 1×24.

This is stipulated by Resolution 177/2020 of the Central Bank of Cuba (BCC), published in the Gaceta Oficial Extraordinaria number 73, which includes six other resolutions of the country’s highest banking entity and according to which as of its entering into force “new deposits of convertible pesos are not allowed in the accounts in that currency of individuals” and “any cash withdrawal from these accounts is made in Cuban pesos.”

It also explains that individuals’ accounts in CUC for savings, time deposits and certificates of deposits, are kept in that currency for a period of up to 180 days, and during that period their holders can decide if they convert their balance, totally or partially, to CUP at the exchange rate of 24 CUPx1 CUC, or they do it to USD or euros.

The regulations also specify that if the account holders do not go to the bank to modify them during the set period, they will be automatically converted to CUP, at the exchange rate of 24×1, “in the method and term originally contracted, and they earn interest in this currency at the corresponding rate.”

When this happens in time deposit accounts and certificates of deposits, these will receive a bonus of between 1.5% and 3.5%, depending on the term. On the other hand, if their holders show up at the banks to exchange them into Cuban pesos during the 180 working days as of January 1, “they are only entitled to accrued interest, as long as the rest of the conditions agreed in the initial contract are maintained.”

Meanwhile, if the holders decide to convert the balance, totally or partially, of their accounts in CUC to USD or euros, “the bank issues a certificate of deposit in those currencies, according to the conditions established for this new product.” However, the BCC clarifies that in these cases “the holder of the certificate of deposit in USD or euros, once constituted, cannot increase its balance, extract cash in these currencies, or transfer them to other banking products in foreign currency.”

Likewise, it points out that “when the conditions of the country allow availability of currency to back these certificates, their conditions may be modified” and that “if clients decide to withdraw their funds, before it is backed with liquidity, the title will be canceled and the withdrawal is carried out in Cuban pesos for the amount of the principal plus the corresponding interest, at the exchange rate of the day the operation is executed.”

The BCC resolution also specifies that the bank accounts of Cuban individuals and legal entities, and the other subjects that carry out monetary transactions in the national territory, will be in CUP, “except in cases where it is expressly authorized to operate accounts in foreign currency,” and that the transactions that are currently denominated and executed in the national territory in CUC or in foreign currency are denominated and executed in CUP, “except in cases that are expressly authorized.”

The bank confirms that the convertible peso will cease to be issued and circulated in the country, although in the enabled 180 days may be paid with it in the establishments that until now carried out sales and operations in that currency, in which the change will be given in Cuban pesos. Also, ATMs will only dispense CUP, regardless of the currency in which the account to which the card is associated is denominated.

Furthermore, the debit cards associated with accounts in CUC remain valid “until the issuing bank decides, and operations are carried out in Cuban pesos,” while the exchange rate of the Cuban peso against foreign currencies “is a fixed exchange rate regime.”

Regarding the bank accounts opened in Cuba in foreign currencies by Cuban and foreign individuals “they can remain in their current denomination, or be converted into Cuban pesos at the decision of the holder, according to the current exchange rate,” according to resolution 180 of the BCC.

These bank resolutions are part of the monetary and exchange reorganization that will begin on January 1 and which, in addition to the elimination of the CUC, entails the establishment of an exchange rate of 24 Cuban pesos (CUP) per USD, business readjustments and the increase in prices, wages and pensions in the country.