About Cuba, Biden said at a rally in José Martí Park, in the center of the city and on the edge of Miami River: “We need a new Cuba policy” since “Cuba is no closer to freedom and democracy than it was four years ago.” 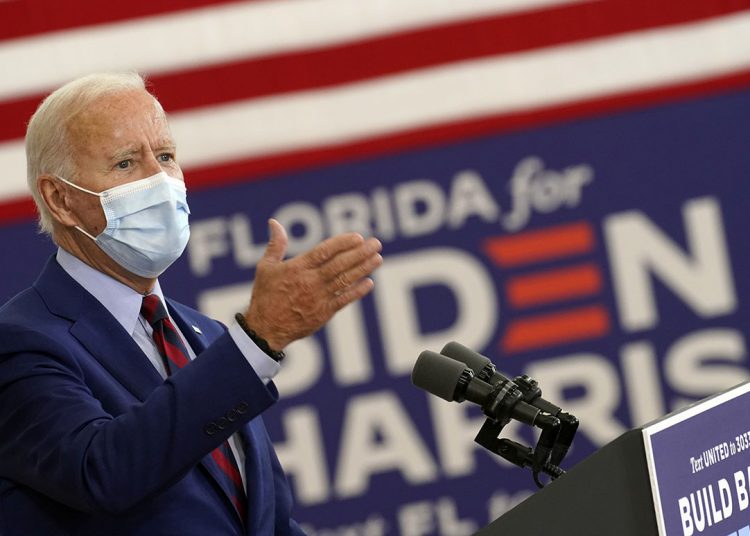 Less than a month from a controversial and difficult presidential election, marked by practically unprecedented problems such as a coronavirus pandemic, this Monday Democratic candidate Joe Biden went down to South Florida for the second time to tell Cubans and Venezuelans certain things. For example, if he is elected, he intends to allow Cubans stranded on the other side of the border to enter the United States. And that he will grant Venezuelans the temporary residence status to which they aspire so much, and protect them from Nicolás Maduro’s abuses.

“We need to rebuild our ability to work with our partners throughout the Western hemisphere to confront those who continue to oppress the rights of their people. Maduro is a dictator, plain and simple,” stressed Biden.

If he reaches the White House, he assured, “I would immediately grant temporary protective status to Venezuelans” and will bet on sanctions against Venezuela as a “comprehensive strategy.”

About Cuba, Biden said at a rally in José Martí Park, in the center of the city and on the edge of Miami River: “We also need a new Cuba policy” since “Cuba is no closer to freedom and democracy than it was four years ago,” when President Donald Trump began his term in office and began to undo his predecessor’s Cuba policy. “In fact, there’s more political prisoners, the secret police are as brutal as ever, and Russia is once again a major presence in Havana,” he said.

Biden emphasized at this point the engagement and position of the Obama administration: “Americans, especially Cuban-Americans, are the best ambassadors for freedom in Cuba.” There is no other solution, he said, than “empowering the Cuban people to determine their own future,” since this constitutes a way of defending “national security interest in the United States.”

At that meeting, the vice president also said: “For my entire career, I strived for democracy and human rights, for freedom of the press, assembly and religion against dictators of the left and the right.”

Later, during a meeting organized by the television network NBC, in which attendees raised their questions and concerns, an attendee asked him how he responded to the accusations of being a socialist and a radical of the left, one of the favorite and repeated mantras of electoral propaganda, on and off TV, and of Donald Trump supporters. Biden recalled that at the beginning of his career he ran against a socialist. “I have taken on the very people that in fact we’re worried about. I’ve taken on the Castro’s. I’ve taken on all these dictators. I am no more socialist our communists than Donald Trump is.… Well, I won’t say it. Anyway,” he said.

Biden’s low level of support among Cuban Americans is due in no small measure to that propaganda. One of those constructs with emotional impacts that, for obvious reasons, finds echoes within the Cuban, Venezuelan and Nicaraguan communities.

He also referred to the COVID-19 pandemic, a national catastrophe, saying he didn’t understand how the president does not want to take responsibility, adding that this is a matter of science and the president hasn’t even let FEMA help schools with masks and student assistance treatment. Biden said that President Obama and he got Congress to approve $9 million for that assistance and that this president has refused to grant it.

According to a poll published last Friday by Florida International University, 59% of Cuban Americans plan to vote for Trump in this election, while only 25% would vote for Biden. Another 16% were undecided or did not plan to endorse either candidate.

But Biden’s national advantage over President Donald Trump nearly doubled after the first presidential debate. According to a new NBC News/The Wall Street Journal poll, voters said by a 2-to-1 margin that the former has a better temperament for president than the latter.

The poll was carried out two days after the debate between the two, but before Trump tested positive for COVID-19 and was admitted to the Walter Reed military hospital.

Now the Democratic candidate is 14 points ahead of registered voters (53% vs. 39%), well above his 8-point lead in a pre-debate poll.

He also leads in Florida by an average of 4 points and has a significant advantage among Latino/Hispanic voters nationwide. An NBC News/Wall Street Journal/Telemundo poll showed Trump trailing Biden by more than 35 points among Hispanic voters: 26% vs. 62%.

For the last two months, Biden’s campaign has been developing an offensive in South Florida, investing 23 million dollars in television commercials in the Miami media market, according to data from Advertising Analytics. And over the past five weeks, he spent more than Trump’s on Spanish-language TV ads in Florida: a total of 3.1 million vs. Trump’s 2 million.