The Obama-Biden policy achieved dozens of collaboration and mutual benefit agreements between the two countries...the intensification of measures to suffocate Cuba has only achieved an enormous setback in those achievements. 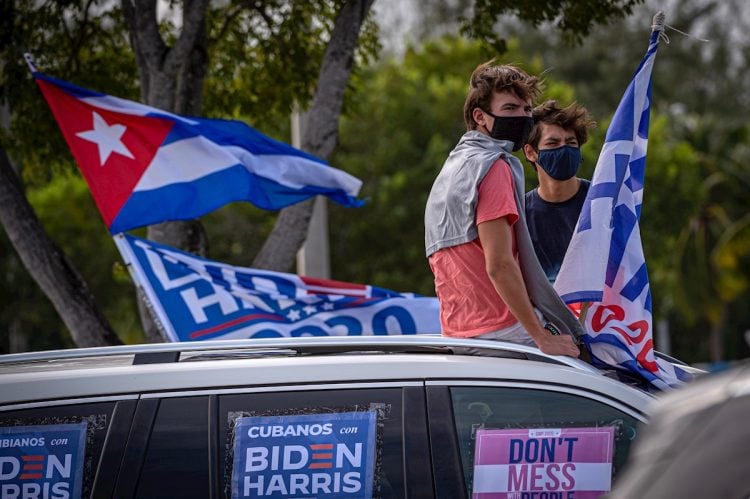 Some young people listen to the speech by former U.S. President Barack Obama, sitting on the roof of a car decorated with posters that say “Cubans with Biden Harris,” during a rally in support of the Democratic presidential candidate Joe Biden, on Campus Biscayne of Florida International University (FIU) in Miami, Florida. Photo: Giorgio Viera/EFE (Archive)

President Biden claims to have consulted with Cuban emigration to formulate his policy toward Cuba, and Secretary of State Blinken has repeatedly said that “diplomacy has returned” in the United States’ actions. It pains me to say it, because I voted for Biden and I support his domestic policies, but those claims regarding Cuba are false.

Biden seems to be advised by the most right-wing sectors of our emigration, those that for decades have maintained a policy that we know has failed in all its objectives, and that until today has only managed to cause suffering to Cubans on the island as well as to Cuban Americans in the United States. And that is not to mention that his consultation also seems to have been only with sectors that will never vote as Democrats.

The blockade/embargo policy against Cuba has been a total failure and today, with the pandemic and the resulting international economic crisis, it is brutally cruel to Cubans on the island, apart from being ineffective for the supposed “U.S. interests.”

The Obama-Biden policy achieved dozens of collaboration and mutual benefit agreements between the two countries, facilitated the reunification of Cuban families and a normal flow of visits in both directions, and also began to change a besieged plaza political culture in Cuba — understandable after 60 years of hostilities — but damaging to the need for a much broader debate than then existed on the island. The intensification of measures to suffocate Cuba has only achieved an enormous setback in those achievements.

The July 11 events are undoubtedly an awakening of the indisputable discontent of important sectors of the Cuban population. The country’s leadership, according to its most recent statements, seems to have taken note, so I hope they will speed up many urgent, necessary, and promised changes. But these events are also the result of the U.S. blockade, the international economic crisis, the pandemic, and the incessant harassment on social networks directed at Cuba. To affirm otherwise is to ignore the facts. The illusion of the Cuban-American right — that this year “we’ll celebrate Christmas in Havana” — is a total deception. Cuba has changed; there is no return to the so-called “Cuba of yesterday.” If as an emigration we want to contribute to the progress of our country of origin, the first thing we have to do is accept that reality, and dialogue in peace and with respect with today’s Cuba.

I cannot close without expressing how much our so-called Cuban-American “leaders” embarrass me, those who not only pursue cruel policies against the majority of Cubans on the island, but even advocate bombing Cuba. Proposing the crazy idea of ​​bombing the island to win votes in the next elections? How far does their hatred go? And finally, as for our President Biden, I must ask him to also consult with our part of the Cuban-American emigration, and not only with the extreme right. It would be much better for Cuba, for our emigration, and for our adopted country.