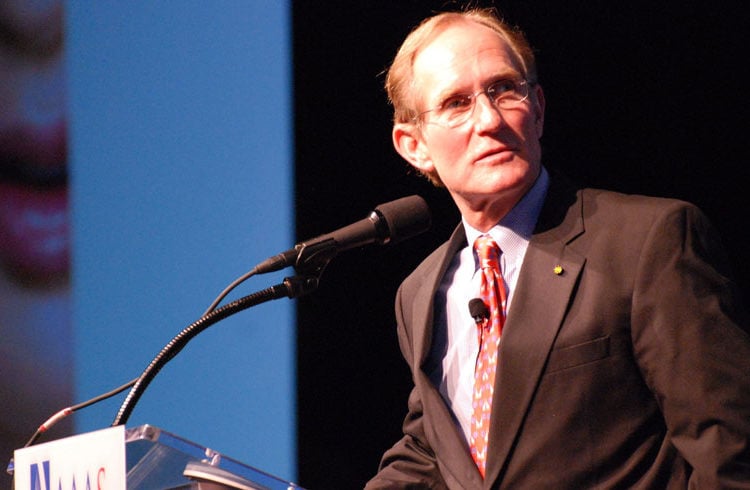 Scientific links between Cuba and the United States have a new ambassador. University professor and researcher Peter Courtland Agre, Nobel Prize for Chemistry in 2003, has entered the island’s Academy of Sciences as a corresponding member.

Formed as a biologist, Agre has a renowned career in and outside his country which endorsed his approval by the Cuban academicians. His relationship to the island also contributed to this since he has been in Cuba on several occasions and in 2015 a plaque was unveiled in his honor on 280th anniversary of the foundation of the University of Havana.

The U.S. researcher is a member of the National Academy of Sciences and the American Academy of Arts and Sciences, as well as of similar institutions in Russia, Ireland and Denmark.

At present, Agre is the director of the Malaria Research Institute and of the Bloomberg School of Public Health of the Johns Hopkins University in Maryland.

He was awarded the Nobel Prize together with his compatriot Roderick MacKinnon for their discoveries concerning channels in cell membranes. In his case, his contribution was fundamental in the discovery of aquaporin, a water-channel protein that moves water molecules through the cell membrane.

Peter Courtland Agre’s incorporation was approved in the most recent plenary meeting of the Cuban Academy of Sciences. The category in which he was included is set aside for persons not residing on the island with a notable contribution to scientific development.

With Agre, who is a native of Northfield (Minnesota), the Cuban academy has 29 corresponding members. They come from 19 countries, among them Germany, Spain, Colombia, Russia and the United Kingdom.

Four U.S. scientists had previously entered, turning the United States into one of the nations most represented in the island’s institution.

One of the most illustrious academicians from this country, Dr. Richard Levins, professor of the Harvard University School of Public Health, received the title of Doctor Honoris Causa of the University of Havana and the Honorary Category of Research Collaborator of the Ministry of Science, Technology and Environment (CITMA). He was a member of the Cuban Academy from 2004 until his death last year.

The incorporation of Mark Rasenick, professor of Physiology, Biophysics and Psychiatry of the University of Illinois (Chicago), was approved in 2015. His most important studies include those devoted to the G protein signaling and its influence in phenomena like depression.

Historian Stanley N. Katz, President Emeritus of the American Council of Learned Societies and of the working group of the Council for Social Research on Cuba; as well as prestigious geneticist Michael Clegg, University of California Dean of the College of Agricultural and Environmental Sciences and co-president of the Inter-American Network of Academies of Sciences, are also corresponding members.

The presence of U.S. scientists in the Cuban Academy of Sciences has as counterpart the recognition of the island’s figures and research centers by that country’s institutions.

The most significant achievements of scientific collaboration between both nations is the start of a clinical test in the United States of the Cuban vaccine CIMAvax-EGF against lung cancer; as well as the agreements reached in the fight against diseases like Zika, a joint program for the restoration of coral reefs and the agreements signed during the Obama administration on issues like wildlife conservation and cooperation related to seismology and meteorology.

The New York Academy of Sciences recently named Cuban Leslie Fermín Molerio León as Ambassador during the bicentennial of the institution, the third oldest U.S. scientific society. A specialist in Isotopic Hydrology, Molerio León will form part of a group of 200 scientists recognized for their trajectory.