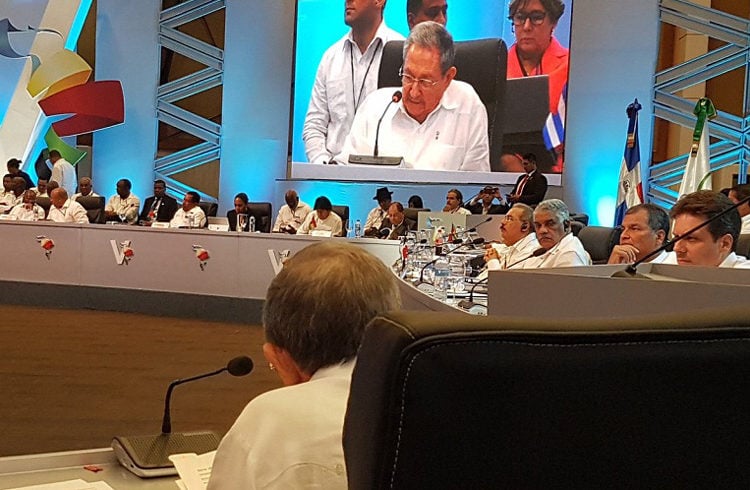 Almost a week after Donald Trump’s inauguration, Raúl Castro had his first words for the new U.S. president, after congratulating him for his election last November. He did so at the 5th Summit of the Community of Latin American and Caribbean States (CELAC) held this Wednesday in Punta Cana, Dominican Republic.

In his speech at the forum, the Cuban president confirmed “Cuba’s will to continue negotiating pending bilateral affairs with the United States based on equality, reciprocity and respect for our country’s sovereignty and independence, and to continue the respectful dialogue and cooperation with the new government on issues of common interest.”

In a conciliatory tone, the Cuban president also said that the two nations “can cooperate and coexist in a civilized way, respecting differences and promoting all that benefits both countries and peoples,” but he reaffirmed that “it must not be expected that Cuba make concessions inherent to its sovereignty and independence.”

He insisted on the elimination of the economic blockade as a constant demand from the Cuban side in the bilateral talks begun in December 2014. This position was ratified by the CELAC member nations, who approved in Punta Cana a declaration against the embargo/blockade.

The Latin American and Caribbean countries also greeted the initiatives boosted until now for the advance in the dialogue between Cuba and the United States and asked President Trump to give back to the island the territory occupied by the Guantanamo Naval Base.

Regarding the new administration’s ties with the region, Raúl Castro showed concern.

“It would be desirable that the new U.S. government opt for respect for the region, although his having stated intentions that place at risk our interests in the spheres of commerce, for example, migration and the environment, among others, is cause for concern,” he said.

Faced by this panorama, Castro called for “establishing common action courses” among the area nations and to avoid “a return to neoliberalism” which in his opinion would worsen the social conditions in Latin America and the Caribbean. Moreover, he reiterated his government’s support for Puerto Rico’s independence.

The Cuban president’s statements took place on the same day that Trump signed an executive directive to start building a wall along the border with Mexico and to strengthen the policy for illegal immigrants.

Regarding Cuba, on the other hand, the U.S. president has not announced any measure or strategy to be followed, beyond his campaign promise to reverse Obama’s decision if a “better deal” is not achieved with Havana. Neither has he said anything about the Cuban emigrants who were left stranded in Mexico and Central America after the end of the “wet foot, dry foot” policy.

Rex Tillerson, named Secretary of State by Trump, said in his hearing before Congress that he would pressure Cuba to promote “democratic changes” on the island and that he would recommend that the president not sign any act that eliminates the embargo.

However, the designation of Jewish lawyer Jason Greenblatt as international negotiator of the Trump administration and of Georgia Governor Sonny Perdue as Secretary of Agriculture opens a possibility of dialogue since in the past they have both shown to be in favor of a rapprochement to Cuba. Even so, the obstacles for the increase in bilateral relations can also come from outside the federal government.

It was announced this Thursday that the signing of a memorandum of understanding between the Cuba’s National Ports Administration and that of Florida’s Port Everglades had been suspended by the latter. The cause was the announcement by Florida Governor Rick Scott that the funds for the State’s ports that have commercial relations with the island would be cut.

Scott’s threat took place a day after the arrival to Port Everglades of two containers with artisanal charcoal, the first legal shipment arriving in the United States from Cuba in more than 50 years.

The U.S. port authorities announced that, although the memorandum would no longer be signed, the meeting between its administration and the Cuban delegation would be carried out.