This is another story…


The comedy show “This is another story”, performed by Luis Silva (Pánfilo), Mario Sardiñas (Chequera), Andy Vázquez (Facundo) and Kike Quiñones, will be on Karl Marx Theater’s stage on Friday 27 and Saturday 28 at 9:00pm, and also on Sunday 29 at 5:00pm.

Laughs with no signal

This weekend, the comedy group “La leña del humor” will perform the show “Laughs with no signal” at Mella Theater on Línea Street. The performances, with the art direction of Maikel Cerraval, will be on Friday 27 and Saturday 28 at 8:30pm and also on Sunday 29 at 5:00pm.

Waldo at the Café

Songwriter and singer Waldo Mendoza will perform this Saturday 28 at National Theater’s Café Cantante Mi Habana, from 5:00pm to 9:00pm.

Let’s have fun with the National Symphonic Orchestra

The Cuban National Symphonic Orchestra will present a series of concert in honor of German composer, director of orchestra and pianist Ludwig van Beethoven’s 190th death Anniversary. Beethoven has been considered one of the most important composer in music History and his legacy has influenced the subsequent development of musical art in a decisive way.

As a part of the musical event, the Orchestra will offer a program at Cuban National Theater’s Covarrubias Hall this Sunday 29, at 11:00am. This program will be directed by Irina Toledo Rocha, General Directress of Villa Clara’s Symphonic Orchestra, and pianist Annia Castillo will also perform on the stage.

Singer Raúl Paz will be one of the guests to the show “Divine”, this Saturday 28 at 11:00pm at National Theater’s Café Cantante Mi Habana. 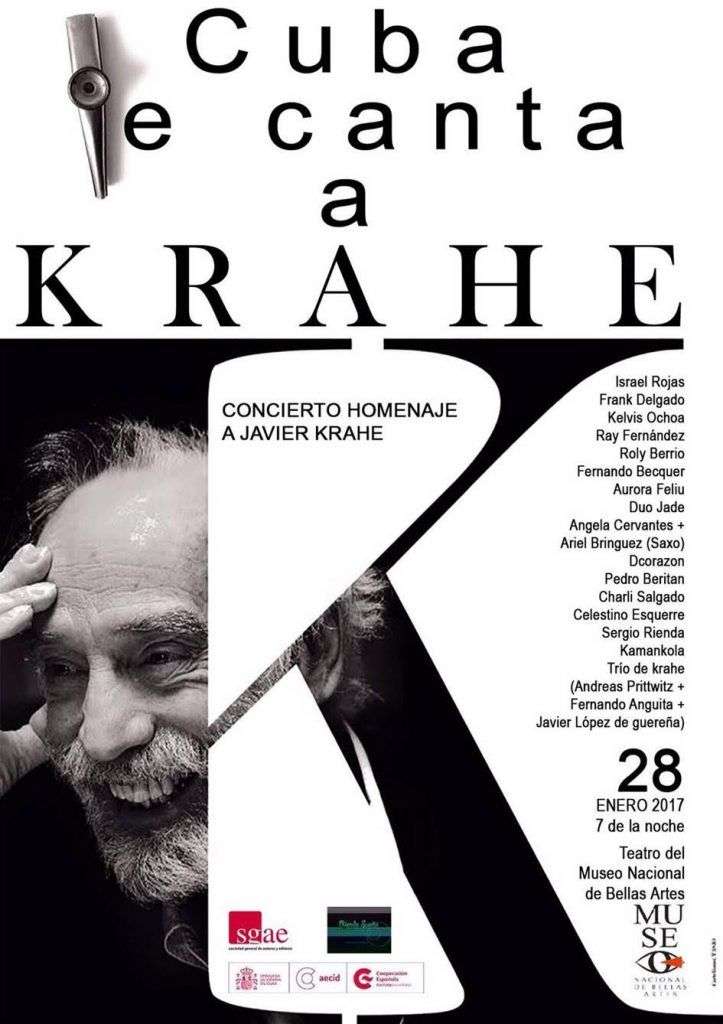 A musical comedy with Cecilia

The National Lyrical Theater will perform a version of the musical comedy “Cecilia Valdés” with the art direction by Iván Balmaseda, the musical direction by Giovanni Duarte and the general direction by Roberto Chorens. It will be on the stage of García Lorca Hall, from Havana Grand Theater Alicia Alonso, this Friday 27 and Saturday 28 at 8:30pm and Sunday 29 at 5:00pm.

The regular space Saturday of the Book will present “Following Martí’s footprint” by the writer Reinaldo Acosta Medina and published by Political Publishing House. The rendez-vous will be at the Wooden Street in Old Havana. 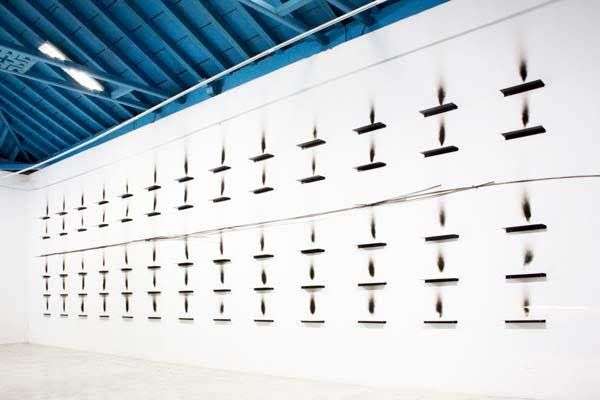 What about the light, Diogenes?

The project “Diogenes and the light” will be inaugurated this Friday 27, at 8:00pm, at Factory Havana Art Gallery. The exposition, curated by Concha Fontenla, will gather the prestigious artists Octavio César Marín and José Ángel Toirac. They build a creative proposal inspired by one of the famous Greek cinical Diogenes’ life passages: he walked Athens’ streets with an oil-lamp in the daylight looking for an honest man on Earth.

The artists promise an exhibition that will overcome the anecdotes and will promote the criticism with bases in the values. The spectator will be involved in a journey that puts the Greek philosopher’s myth in the middle on the Cuban  history and reality. 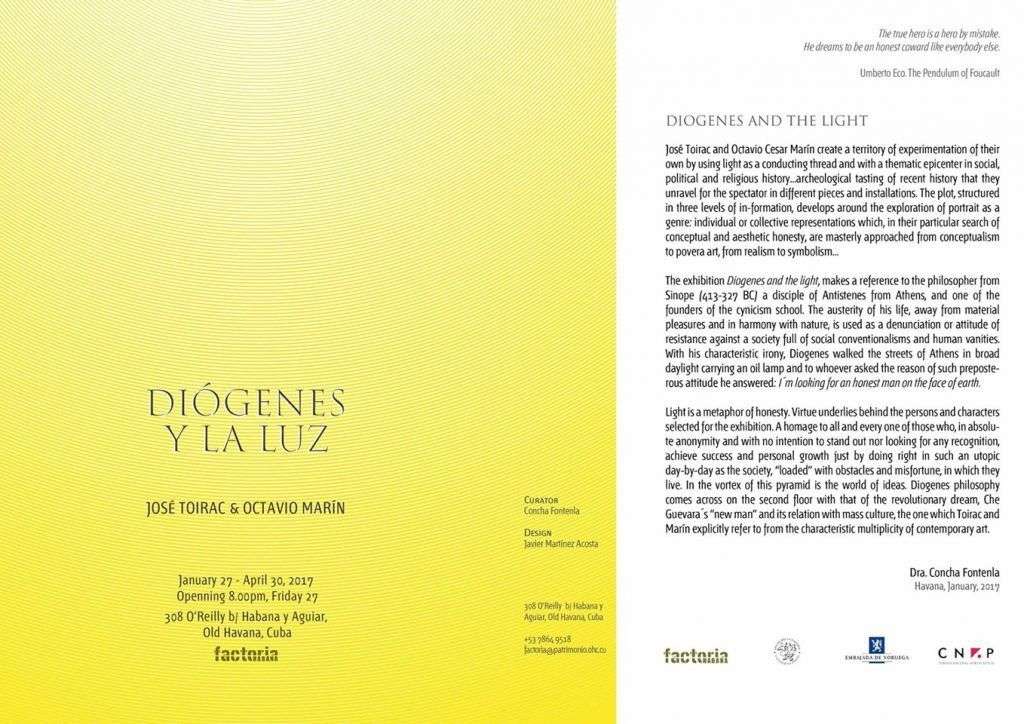 The personal exposition “Insolent tale, tame stories” by the artist Henry Eric will be inaugurated this Saturday 28 at 6:00pm. The rendez-vous will be at Gorría Gallery Studio, located at San Isidro 214, between Picota and Compostela, Old Havana. 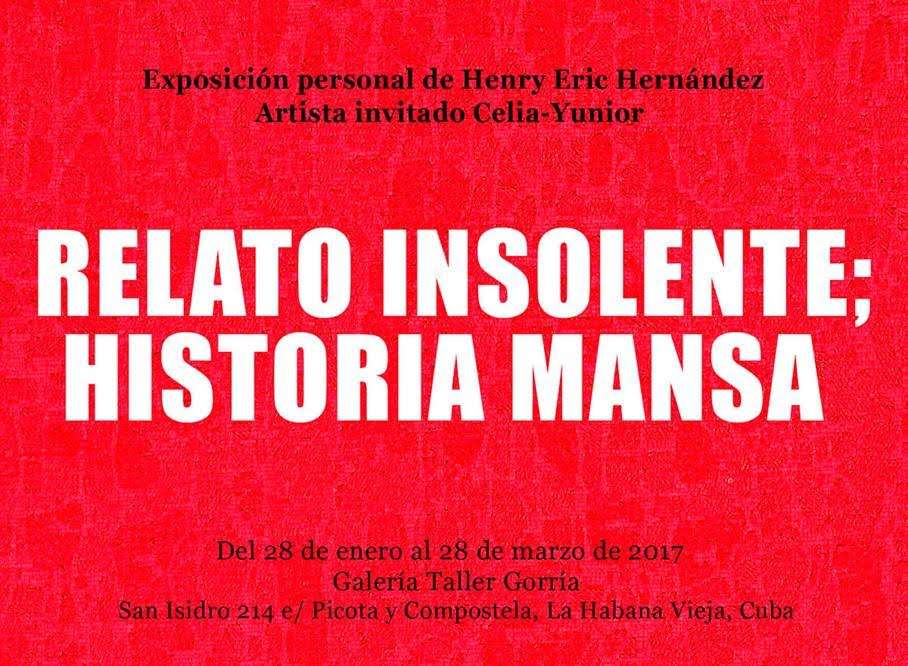 The new space Meat & Marble Gallery, located at 36 Street 109, between 41 and 43, New Vedado, will open its gates with an exposition by the Swedish artist Björn Kjelltoft. The event will be held today Friday 27 at 7:00pm. 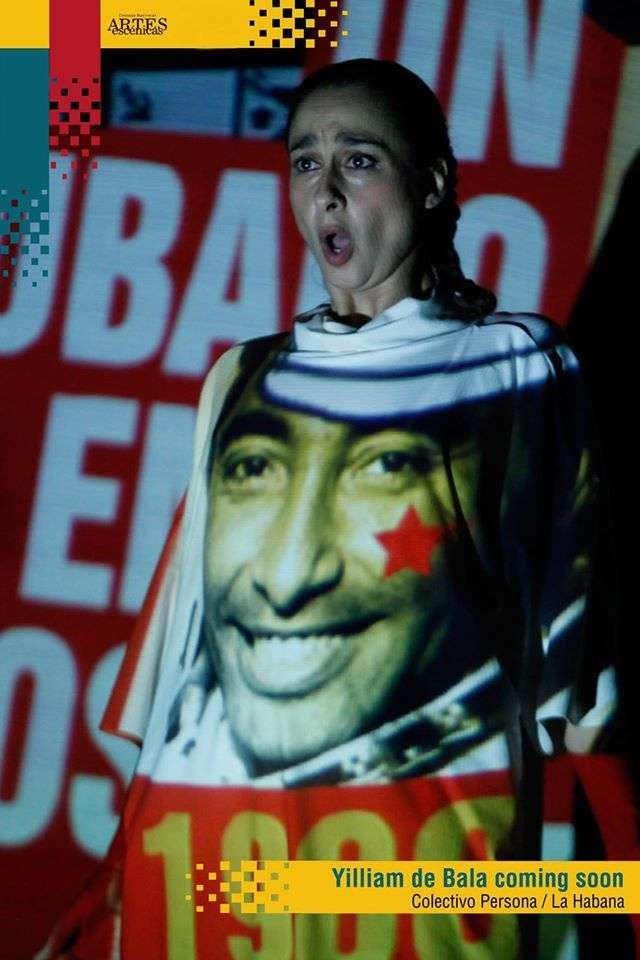 The Group Persona, directed by choreographer Sandra Ramy, will present the play “Yilliam de Bala coming soon” on January 27, 28 at 8:30pm and January 29 at 5:00pm, at the Tito Junco Hall from Bertolt Brecht Cultural Center.

The Ballet School in concert

The National Ballet School Fernando Alonso, with general direction by Ramona de Sáa, will perform this weekend at Cuban National Theater’s Avellaneda Hall. The concert program includes some performances and pas de deux from the classic and contemporary repertoire. The shows will be on Friday 27 and Saturday 28 at 5:00pm and also on Sunday 29 at 11:00am. 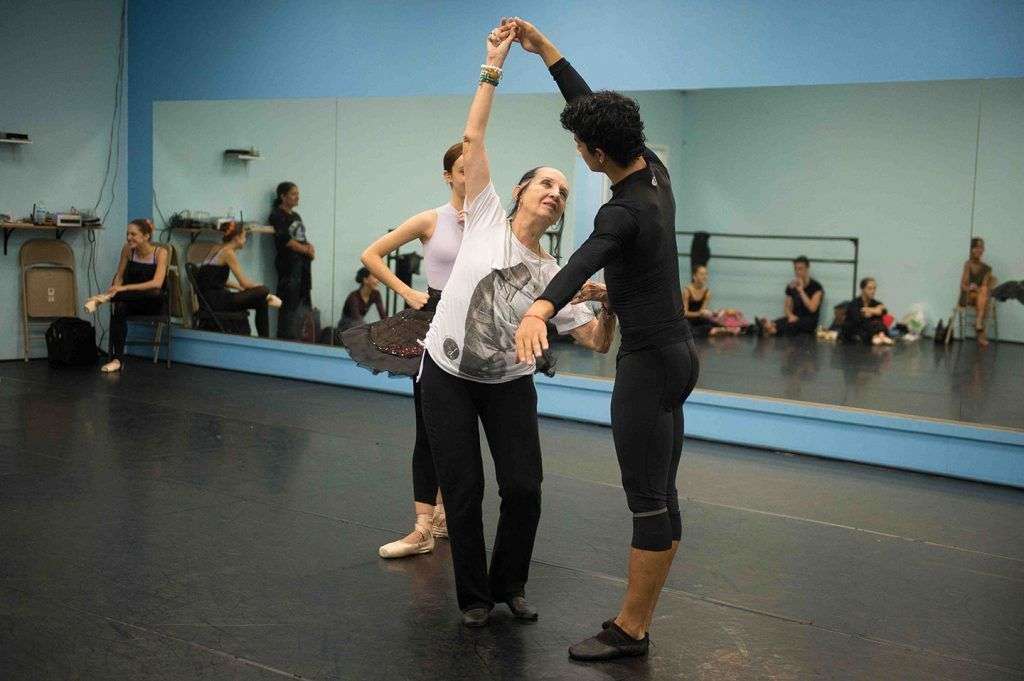 Laura at the Martí

Laura Alonso’s Company, from Prodanza Center, continues its shows at the Martí Theater. This time, presentations will be on Friday 27 and Saturday 28 at 8:30pm and also on Sunday at 5:00pm.


The show “Dancing is Love” from Havana Queens Company, with the art direction by Rosario García, will be presented at the Jesús Ménendez Sports Center, located at 51 Avenue, between 94 y 96, Marianao. The rendez-vous will be this Friday 27 at 11:00pm.


TOYBOYS Dance Company, directed by Ulf Nilseng, will present twice at Las Carolinas Theater, on Saturday 28 and Sunday 29 at 7:00pm.

The Norwegian group will share “Be-longing” with the Cuban public. This is a piece that explores the feeling of belonging and it id one in which its creator ask himself: is it possible to find a space where “belonging” can be shown? Is it worthy dancing, and also belonging? Does this has a language?

With this piece, Ulf Nilseng makes a twist in his works and looks to his own expression as an artist and to his long career as a dancer and choreographer. He also opens a new space of creative encounters in which he works with the young actor Huy Le Vo, the awarded composer and musician Sjur Miljeteig, the videomaker Kai Rennes and the ilummination designer Magnus Mikaelsen, his fellow travellers in the investigations about the belonging concept.

This direct, personal, honest and existentialist play has been formed inspired by the queer philosophy and the language of people with hearing disabilities. The process of transforming a documentary material into something different has been the key part to make this dance happen. 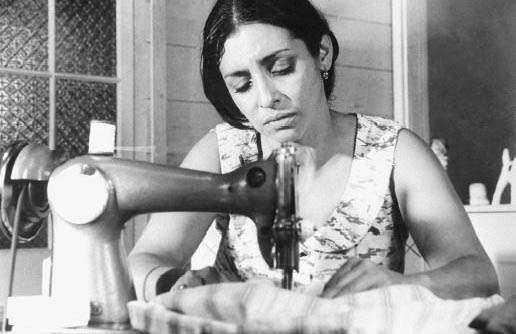 Four restored Cuban films will be shown again at the Cuban Cinematheque. This time the films will be “Memoirs of the underdevelopement” by Tomás Gutiérrez Alea from 1968, restored copy by The Film Foundation’s World Cinema Project, George Lucas Family Foundation and L’immagine ritrovata laboratory from Bologna; “Portrait of Theresa” by director Pastor Vega from 1979, restored by Labodigital from Mexico; “A Cuban fight against the demons” (1971) and “The survivors” (1978), both by Gutiérrez Alea and restored by the Archive of the Academy of Motion Picture Arts and Science in Hollywood.

The work of director Jorge Molina, graduated in 1992 from Direction in the International School of Cinema and TV from San Antonio de los Baños, will be shown in the big screen. Part of his work will be exhibited at Charles Chaplin’s Charlot Room: Molina’s Guilt, Cold Jennie, Molina’s test, Molina’s solarix, Molina’s mofo, The man that talked to Mars, Molina’s phantas and Molina’s ferozz, et al.

Jorge Molina is the only Cuban director who has explored into the genre, fantastic and horror cinemas featured with considerable dosis of erotism, sometimes at the edge of the hardcore he loves so much and he’s planning to bequeath a film in the future. 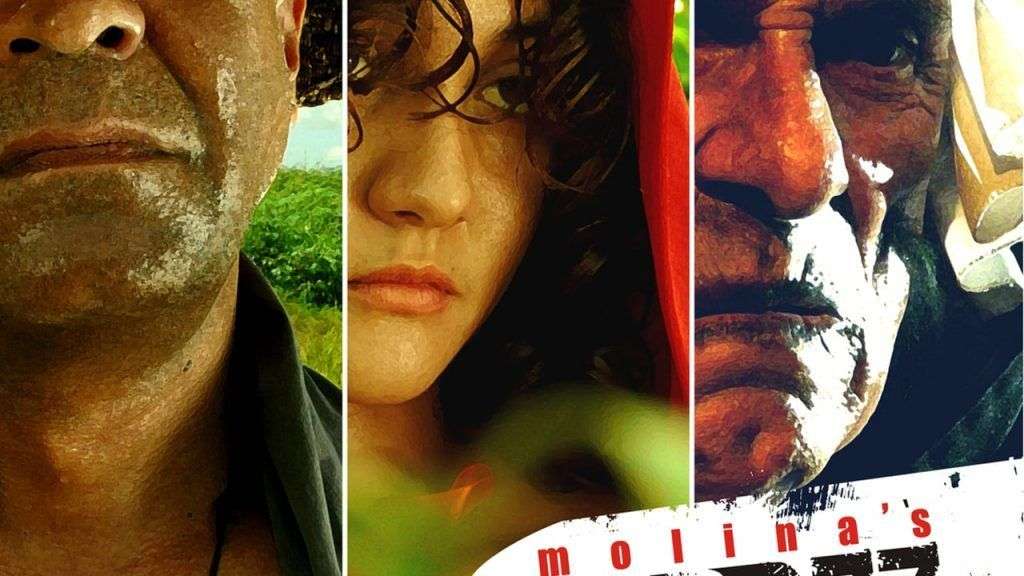 Marcelo Salazar y Christian Salazar, producers and founders of Redline Recordings, and rap singer Linda Pira, awarded with a Swedish Grammy 2014 as a New Comer of the Year, will present the workshop Composition of Arrangements of Urban Electronic Music, this Friday 27 at 5:00pm at the Cuban Art Factory. This worshop will be about the structure of the song, the musical form, transitions, cuts, marks and effects, dynamics creation, vocal production and some other issues.