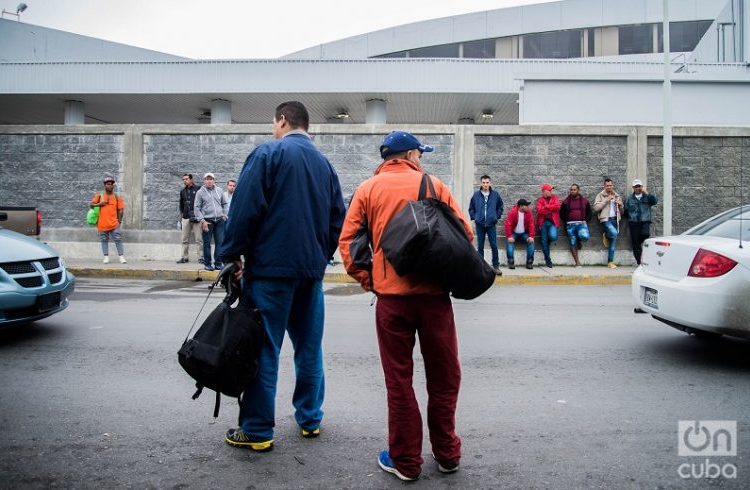 Cuban emigrants on the border between Mexico and the United States. Photo: Irina Dambrauskas.

Just at the end of his presidency, Barack Obama annulled the “wet foot, dry foot” policy that facilitated the regularization of the Cubans who arrived illegally to U.S. territory.

The regulation was celebrated by the island’s government and in a joint statement was considered “an important step in the advance of bilateral relations.” However, in and outside Cuba many condemned Obama for political or personal reasons, while hundreds of Cubans were surprised by the news during their journey to the United States.

The outgoing president thus became the hero or the villain, according to the point of view of those who assessed the measure.

However, there is an irrefutable fact: figures that confirm that during the Obama administration more Cuban individuals emigrated or tried to reach U.S. soil than at any other time in the island’s recent history.

An estimate by the Telemundo 51 channel, based on Department of Homeland Security and Department of State statistics, reveals that more than 366,000 Cubans left the country to go to the United States between 2009 and 2016.

This number, undoubtedly significant, includes some 185,000 emigrants who were able to irregularly enter the United States by sea or through the Mexican border and the more than 20,000 who were intercepted at sea before reaching the U.S. coasts.

The Cubans who legally immigrated as part of the program of 20,000 annual visas and for family reunification which the U.S. government grants to Cuba would have to be added.

Thus the migration wave in Obama’s two presidential terms surpassed other peak moments in that direction, like the first decade of the Cuban Revolution, the 1980 Mariel exodus and the 1990s.

An extremely illustrative data points out that only through the immigration station of Laredo, Texas, close to 36,000 Cubans arrived in 2016, a figure similar to those who arrived in the United States during the so-called rafters crisis in 1994.

Another revealing statistic confirms that the peak point of the migration wave took place in 2013, a year in which the Havana government eased its immigration policy. In just four fiscal years (2013-2016), the irregular entry of Cubans through the Mexican border and by sea surpassed 141,000 individuals, 76 percent of the total of those who arrived since 2009.

The immigration reform enabled Cubans to not require an exit permit or letter of invitation to travel abroad and that they could be outside the country up to two years without losing their residence in Cuba.

Lawyer and analyst Sergio Comas, cited by Telemundo 51, considers that the reform was “a strategic operation from Havana, allowing people to be able to come to the United States seeking benefits and economic improvements, without the mentality of establishing themselves there, with the idea of returning soon to the island with money.”

This interpretation is backed by the data that out of the 617,000 Cubans who traveled abroad in the last four years, 55 percent are still in the established period of 24 months that allows the regular return to the country. A great many of them headed for the United States.

This has been possible due to the granting of tourist or business visas and the increase of academic and cultural exchanges during the last administration, as well as the expansion of options for family visits, with visas valid for five years.

Just in 2015 the Obama administration gave more than 175,000 non-immigrant visas to Cubans, many of whom did not return to the island and availed themselves of the Adjustment Act to request their permanent residence.

And although the act is still in force, the elimination of the “wet foot, dry foot” policy supposes an important change in the migration panorama. Cuban immigrants have now lost a great deal of the benefits (legal, financial) they had on arriving in the United States and which privileged them over the émigrés from other countries.

In recent years these concessions, together with the fear that they disappear because of the reestablishment of relations between both nations, sparked off the Cuban migration crisis in several of the region’s countries, especially Central America.

Hundreds of Cubans are still crowded today on the border between Mexico and the United States, or aim to continue their journey to the United States with the hope that the government of Donald Trump reestablishes the annulled policy or that at least he makes an exception with them.

Complying with the bilateral agreements with Cuba, Mexico started the deportation of immigrants from the island, and the group of 90 persons repatriated last weekend was joined this Wednesday by a second group of 70 Cubans.

They are 22 women and 48 men who were returned to Cuba from Tapachula, Chiapas, on a Federal Police plane, as happened with the previous group.

This is occurring at the same time as Donald Trump signed an executive directive to start building the wall on the border with Mexico which he promised during his electoral campaign. The directive also establishes the creation of new centers to detain non-authorized immigrants on the southern border and the reactivation of a federal program to speed up the deportations.

“A nation with no borders is not a nation,” said the president, who promised to achieve the absolute control of the U.S. borders and to discuss with Mexico the best way to confront immigration from Central America.

Regarding the Cubans, on the other hand, he didn’t say a word this Wednesday. The wall, at least for the time being, is also for them.

A venue of defeat