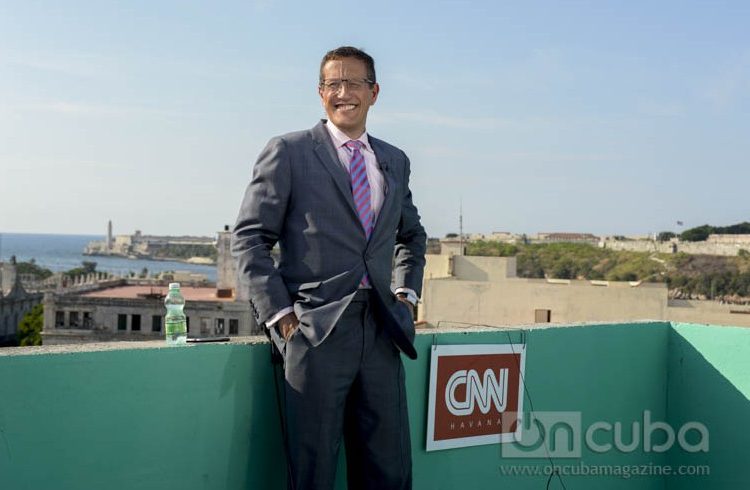 Richard Quest during the shooting of his program in Havana / Photo: Alain L.Gutierrez Almeida

Monday Richard Quest looked happy recording for the first time from Havana his popular commentary and analysis program on business and economics Quest Means Business, of the CNN International chain.

Quest had his set of transmission in one of the balconies of the CNN correspondent in Havana, overlooking the Bay and the Louis Cristal cruise, which brought this time to the city more than 1400 tourists, and it is for him irrefutable evidence of increased tourist traffic to Cuba after the process to restore diplomatic relations with the United States began.

Exclusive to OnCuba Richard Quest said that “changes here will happen slowly, but that’s exactly what should happen.”

“What would scared me, the danger for me would be that the changes occur very quickly,” said the reporter while smoking a cigar, one of the things which he also came to enjoy in his first visit to Cuba.

“I think you do not want American Capitalism. You want to see the changes translated into things: Internet, Iphones, travel. All that will happen, “he added.

Quest Means Business, edition from Havana, had in one of its sections an interview with Cuban-American businessman Hugo Cancio, president of Fuego Enterprises, Inc, Fire Media Group.

During the interview Cancio said that Cuba has tremendous potential for foreign investment in the context that means the process of restoration of diplomatic relations with the United States.

To undertake in Cuba, in the view of Cancio, is necessary to have a kind of formula that he summarized in the acronym PPPV This strange acronym mean for the Cuban-American businessman Patience, Perseverance, Passion and Vision.

One of the biggest concerns Quest exposed in this edition of his television show, was the possibility that when large investments begin to happen, rooted in different spheres of Cuban public administration as corruption and bribery phenomena may hinder initiatives and progress.

“I’m not sure if Cuba learned lessons from countries like China or Vietnam,” he said.

Richard Quest was always histrionic, always hyperactive, more like a cheerleader or a comedian than a reporter. This reporter, in loquacious end and sharp on the topics treated, arrives in Havana moved by the special interest aroused by Cuba and its current stage, which increasingly seems to be more fashionable as a place to visit, and it opens wider potential investors and business people worldwide.

According to Quest, the potential of Cuba in this regard are much higher than those offered by countries in the region such as Puerto Rico, Haiti and other Caribbean countries.