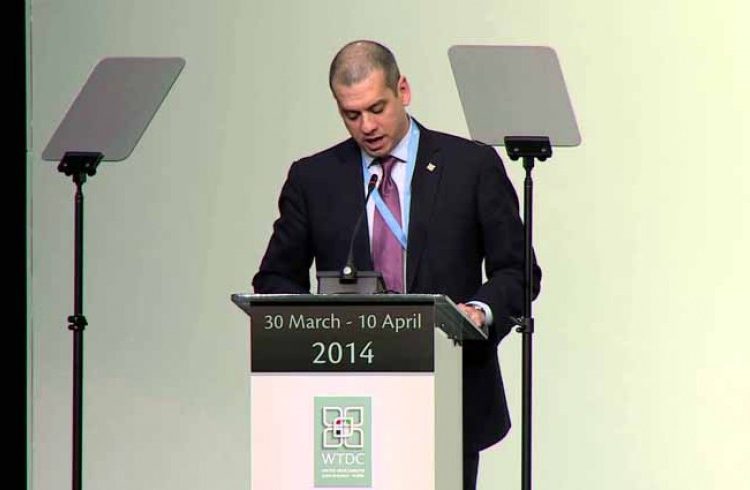 Ambassador Daniel Sepulveda speaking before the Conference of the World Telecommunication Development March 31, 2014.

Daniel Sepulveda came to Havana to discuss a key issue in the normalization of relations. The title of his position (Assistant Secretary of State for International Communications and Information Policy) describes a part of his work. It is a prioritized by the Obama administration in its rapprochement with the government of Raul Castro, alongside the fight against trafficking in persons and air transport between the two neighboring nations.
The third technical meeting between officials of Cuba and the US explored ways to “implement the modifications to the embargo on telecommunications and restrictions that are still in force” reported on its website the Ministry of Communications.
“The meetings were held in a positive atmosphere, focused on developing telecommunications and Internet connections between the two countries,” said Jeff Rathke, director of the Press Office of the State Department in the daily briefing they have.

“Sepulveda said that his intention is to facilitate access of Cubans to the networks, which make our people and our government with it, it is our decision,” says Cuban researcher Harold Cardenas of the blog La Joven Cuba, who attended an informal meeting with the delegation headed by Sepulveda.

The US delegation included officials from the Departments of State and Commerce, as well as staff of the Federal Communications Commission. His journey responds to the opening in telephony and Internet, making an exception to the economic sanctions, through special license issued by the Office of Foreign Assets Control (OFAC), an agency subordinate to the office of the Secretary of the US Treasury.

As part of the negotiations, the US representatives received details about computerization and cyber security policy launched by the authorities in Havana, whose guidelines were explained in a speech by the First Vice President Miguel Diaz-Canel.

Cuba was represented by Deputy Minister of Communications, Jorge Luis Perdomo Di-Lella, along with diplomats from the Foreign Ministry and representatives of the Ministry of Foreign Trade and Foreign Investment.

The delegation returned to America with expectations of reaching concrete agreements. “I explained that perhaps the greatest obstacle to a healthy relationship is the suspicion that the Internet is used for a regime change agenda” Cardenas said.

Appointed as Ambassador in May 2013, the Deputy Assistant Secretary Sepúlveda is an official close to President Barack Obama and Secretary of State John Kerry, for whom he worked at different times, when they were senators. He left the Capitol in 2013 after twelve years of service when his superior entered the US State Department replacing Hillary Clinton.

From his position as Deputy Assistant Secretary, he usually represents the United States in negotiations with other governments on issues related to Internet. His Cuban counterpart, Vice-Perdomo Di Lella, has a similar profile, leading delegations of his country in negotiations with China and conferences of the International Telecommunication Union.

Cuba and US: Human Rights will be on the table