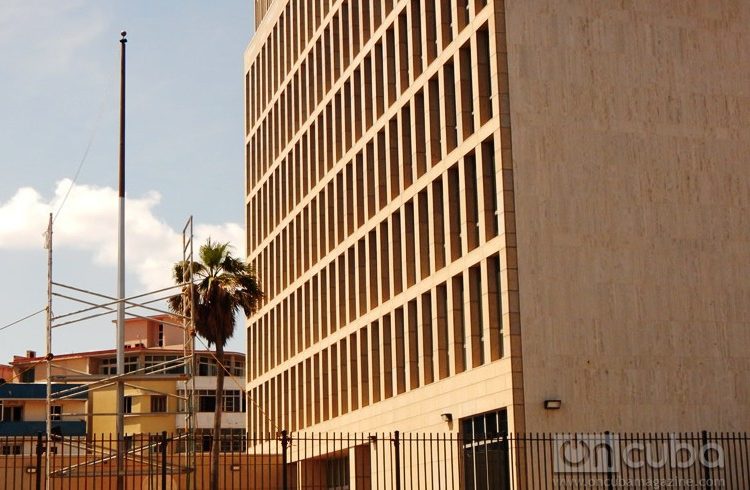 Almost everything is ready for the US flag to fly in Havana. With just two details: the official agreement between the two countries to reinstate their diplomatic missions in perfect conditions, and the occasional hand-rust paint on the metal pole that will hold the banner of the Stars and Stripes.

The mast of 1953 has not been used since 1961 when diplomatic relations were broken. These days it is seen surrounded by scaffolding suggesting preparations for a future ceremony.

The condition of Interest Office host by the Swiss Embassy prevented until now the northern legation be represented by its flag. If it ever flies free will be another symbol of the pitch change in the relationship between the two governments. Although it is expected to do the same beat with hurricane gusts than with gentle breezes.

Witnesses of the future restoration of the pavilion in the building now occupied by the SINA against Malecón, occupy their boxes sitting in the park Calzada and K. They are there waiting their turn to enter the “interview” after a visa to travel to the United States.

“It’s slow, very slow, I see nothing different,” says Otto, a tall man, in his 50s, from Camagüey. Nearby, Nancy, retired from Transport, clarifies that the dialogue is serious, but it takes time.

Claudia charges for filling up forms and is saving to achieve one day a holiday in Florida / Photo: JJ Nieves

“A wound of so many years doesn’t close that soon,” says Claudia, who makes a living by filling up visa application forms and dreams of traveling to Disneyworld. “People believe that the embassy will remove the Adjustment Act and that is not so. It takes time. Immigration procedures have not changed anything. I keep seeing spectacular days in the delivery of visas and other painful, “she says.

Many know in Cuba that even when reinstalling embassies is achieved, many areas of possible friction remain and problems are predictable.

Next March 31, for example, delegations from both countries will sit to talk about a subject that piling on both sides. The different views on human rights come to the negotiating table the proposal of the Cuban government and as a sign of his “willingness to talk about anything.”

Some analysts expect far only occur formal presentations of the respective positions on this contentious issue, as has happened in parallel talks between Cuba and the European Union. The attitude of European envoys could be references to their American colleagues, for connoisseurs of high sensitivity to perceive Cuban impositions when discussing human rights, often claim that they do not want to “give lessons.”

The Summit of the Americas in Panama on April 10 and 11, will be another test for the sustainability of the approach after disputes fueled with unilateral assessment by the United States of Venezuela as a country that threatens its security.

Without breaking or stop the Cuba-US talks have continued despite vigorous Cuban statements of support for its close ally. It is the best proof that the two negotiating teams have managed to keep isolated the long road of rebuilding relationships from external interference.

But there are other outstanding issues that can bring clouds if they don’t receive prompt solution. For example, the permanence of Cuba on the list of countries that sponsor terrorism. As noted by experts as Jesus Arboleya, US could withdraw the Caribbean archipelago with the same arguments used to keep it registered.

However, this is not a “sine qua non” condition to reopen embassies. Yes it is, however, finish the problem of banking services for the Cuban legation in Washington. This weekend again Cuba decided to extend until June 2015 the alternative operation of the consular services of its Interests there, for not having a bank willing to handle even its electricity bills and water.

Remains to be seen how the interpretation of the Vienna Convention which will become part to control the behavior of diplomats in the field are also solved. An overactive deployment of northern logistical support to opposition groups in Cuba can tighten the rope and even break it.

Pending solutions is probably also the detachment of Marines hoisting the American banner on the mast in front of the Malecon. Pragmatism seems to guide those who run undercover in the simple act of touching up with paint the metal support, just in case a sudden agreement ends meet without having enlisted the stage.

One suggestion in the light of the facts: they need to reinforce the structure with a lightning rod because the thunders, in the Caribbean, are very common.

Behind the Wall: The Art