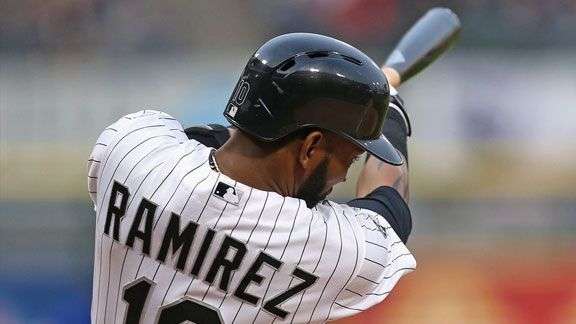 March 31, 2008 marked Alexei Ramirez´s debut in MLB. Almost seven years later, his story has changed within MLB environment and he is considered one of the best shortstops in baseball. He debuted seven years ago against the Cleveland Indians and went 0 for 4. In all that time period, Alexei hasn’t gone to the minor leagues, nor has ever been, even once, to the disabled list. He has remained healthy for 7 seasons where he has played 1072 games, averaging 153 games per season.

His debut in 2008 with average of .290, 21 HR and 77 RBIs in 136 games meant his election as Rookie of the Year in the American League. But in the playoffs the Canadian Evan Longoria changed the ballots with his performance and deprived from the coveted prize Alexei, who finished second.

In that same season, it still stands in memory his current and unknown rookie record of more grand slams in the American League with 4. Many will recall that the last of his four grand slams was on September 29, 2008 against Detroit pitcher Gary Glover, in a decisive game that sent the White Sox to a tiebreaker match against the Minnesota Twins.

After 2008, Alexei Ramirez’s career was stronger year after year with ever new stories. In 2009 he was nominated for the Golden Glove for the first time. In 2010 he reached his first Silver Slugger after being the best offensive shortstop in the American League. In this campaign he left offensive line of 282/313/431 with 70 RBI and 49 extra-base hits.

In his record of 7 campaigns he amasses 277/314/408 with 480 RBIs and 118 stolen bases. He totals 1127 hits, reaching his 1000th hit at US Cellular Field in 2014 off the Anaheim Angels´ Tyler Skaggs. According to Baseball-reference.com, Alexei accumulates lifetime WAR (wins above replacement) of 21.2. He has been an everyday player closest to stardom than to be replaced.

In 2014, Alexei maintained his talent and expertise, at times far from recognition. He was selected for the first time for the All-Star Game, was about to catch his first Golden Glove and won his second Silver Slugger, award that have held star players like Troy Tulowitzki, Hanley Ramirez, Miguel Tejada, and David Concepcion. Last season he increased his value in the game so he is now in the ranking of the best shortstops in MLB. He is number 7 according to the list published by David Schoenfield of espndeportes.com and is number 5 for 2015 according to Brett Talley from fangraphs.com.

There will always be something to say about Alexei Ramirez. He is in the territory of work, perseverance, talent and diversity of powers within the game. He has left much value by beat of silence, anonymity and blind sides. He has spent seven years among the best, and his star doesn’t still extinguish; shine that will last forever.