The threat represents a significant escalation in the confrontation between the two countries and a return to the more violent Cold War language. 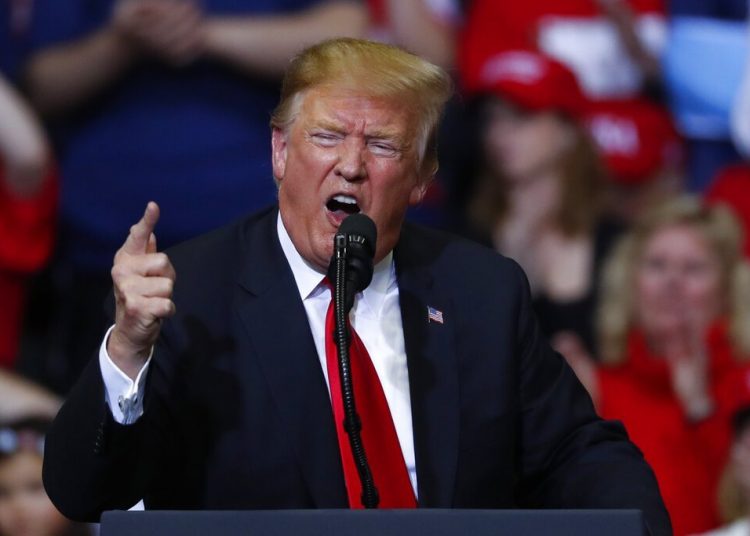 In this photograph of March 28, 2019, President Donald Trump speaks during a rally in Grand Rapids, Michigan. Photo: Paul Sancya / AP.

President Donald Trump threatened Tuesday with a “full and complete” embargo on Cuba and the “highest-level” sanctions if the island’s authorities don’t withdraw their alleged infiltrated troops from Caracas and make them return “peacefully.”

“If Cuban Troops and Militia do not immediately cease military and other operations for the purpose of causing death and destruction to the Constitution of Venezuela, a full and complete embargo, together with highest-level sanctions, will be placed on the island of Cuba. Hopefully, all Cuban soldiers will promptly and peacefully return to their island!” the president wrote in his twitter account.

….embargo, together with highest-level sanctions, will be placed on the island of Cuba. Hopefully, all Cuban soldiers will promptly and peacefully return to their island!

The threat represents a significant escalation in the confrontation between the two countries and a return to the more violent Cold War language, when the Democratic administration of John F. Kennedy in October 1962 established a total embargo on the Caribbean island during the Missile Crisis.

The tweet was published minutes after it was learned that Venezuelan opposition leader Leopoldo López and his family sought asylum in the Chilean embassy in Caracas, after a day of clashes between the opposition, led by the president of the National Assembly, Juan Guaidó, and a group of low-ranking military and forces loyal to President Nicolás Maduro.

Bolton added that today they are seeing Venezuelans fighting for a government controlled by Cubans and outside forces and that this is when Cubans must let Maduro leave.

U.S. and the Cuban presence in Venezuela

The claim of Cuban presence in Venezuela, although not a novelty since it dates back to the early years of the government of the late Hugo Chávez, acquired new vigor and intensity after John Bolton joined the White House last year.

If before the United States barely insisted that Cuba simply provided advice to the Venezuelan security forces and the army, since mid-2018 the Trump administration has renewed the discourse and affirmed that Caracas is a hostage to Havana.

In a speech last November in Miami, when the White House national security adviser presented to the Cuban-Americans a series of coercion measures against Cuba, Venezuela and Nicaragua, he affirmed that the Cuban forces control Maduro’s entire apparatus, have seized the government and give him orders, adding that the Venezuelan government is in Havana.

Two weeks ago, also in Miami, Bolton again assured that “the troika of tyranny,” referring to the three countries, “has started to fall apart.”

Bolton added that Havana continues to support Maduro and helps him maintain the brutal suffering of the Venezuelan people, affirming that as President Trump has said, Maduro is simply a Cuban puppet.

An app for “all electronic commerce” in Cuba

Cuba marches for May Day and in rejection of U.S. sanctions