The flights will be carried out by two Miami companies and will fly to Havana and other provinces. But they will not be able to carry passengers. 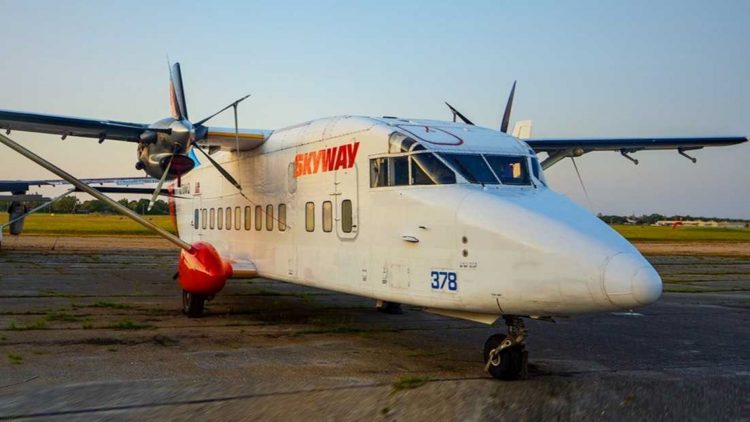 Skyway flights to Cuba will be carried out in a twin-engine Saab. Photo: Skyway

The Joe Biden administration has authorized emergency flights to Cuba, lifting a ban that was implemented last year. The permit was granted to two small Florida airlines and covers flights, without passengers, to Havana and other cities on the island.

The authorization is given in the context of the anti-government protests last July — for which the Biden administration showed its support, while criticizing the Cuban government’s response to them — and the serious health crisis caused by the COVID-19 pandemic.

Thus, the Treasury Department said that IBC Airways and Skyway Enterprises could each operate 20 flights from Miami to Havana until the end of September, carrying humanitarian aid and diplomatic cargo for the United States Embassy.

In August of last year, the Donald Trump administration suspended the operations of all U.S. and foreign airlines to provide charter flights between the United States and Cuba, in addition to a limited number of authorized public charter flights, as part of its campaign to increase economic pressure on Havana.

The order allowed exceptions for emergency medical situations, but the Department of Transportation has now decided that the conditions are in place to authorize exemptions to the freight ban.

Cubans are currently suffering the effects of severe food and medicine shortages, hyperinflation, and power outages amid oppressive heat, all byproducts of a centrally planned economy in extreme difficulty, a situation exacerbated by the increase in the economic embargo during the Trump administration.

According to IBC, quoted by the FreightWaves.com portal, its shipments will include personal packages containing food, medicine and medical and sanitary supplies. The permit was granted in mid-July, but given its limited disclosure it passed under the radar until this weekend.

Another airline, iAero Airways, informed the DOT that if the department granted IBC and Skyway requests it would also seek to transport humanitarian aid to Cuba for customers.

In turn, the permission of the Department of Transportation authorizes the following chartered operations to the airports of Havana and seven other cities in the interior of the country:

At least one weekly Skyway Enterprises flight, with light aircraft, from Miami to Santiago de Cuba, Varadero, Holguín, Santa Clara and Camagüey, between July 22 and November 30, 2021.

The airline expressed its interest in expanding its operations to the cities of Manzanillo, Holguín and Cienfuegos.

Skyway Enterprises operates turboprop Shorts 360s, while IBC Airways’ freight fleet consists of seven Saab 340 aircraft. Shipments would include both packages from family members and customers in the United States as well as shipments sent by organizations and businesses.

The Department of Transportation considered that the requests presented by the airlines respond to the exceptions specified to authorize charter flights to Cuba, and that they include emergency medical purposes, search and rescue, and other trips considered of interest “to the United States.”

It is assumed that these emergency flights will involve freight sent in particular from South Florida, from where other shipments have already departed and there is a particular interest within a sector of the Cuban-American community.