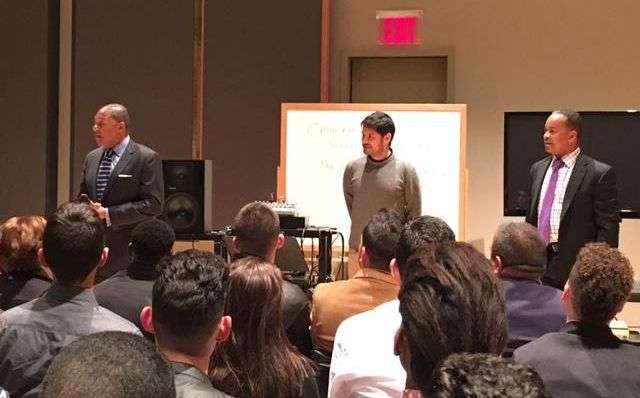 The Cuban students travelled to the United States for Friendship Through Jazz, an initiative created to link Cuban and U.S. cultural organizations for jazz exchanges that increase musical knowledge and technical capacity; broaden perspectives of educators; spark cultural partnerships and learning; and inspire students personally and professionally.

The first of these exchanges took place January 3-9, 2016, in Havana, and reached over 500 students from three schools, including students from Cuba’s national arts school, ENA.

Now it was the ENA students’ turn to enjoy their second exchange, this time in the United States, which included workshops with Jazz at Lincoln Center (JALC), a Q&A with Wynton Marsalis, and two concerts open to the public on APRIL 19 at Dizzy’s Club Coca-Cola in collaboration with JALC’s Youth Orchestra.

As part of their cultural immersion in New York City, the students will also perform at Magnan Metz Gallery, which specializes in Cuban art, and at The United Palace of Cultural Arts in Washington Heights.

They will attend a Broadway show and a concert by the New York Philharmonic and visit New York City popular tourist sites like Central Park, the Museum of Natural History, Rockefeller Center and even ride on the Staten Island Ferry.

It is the first time that any of the students have been outside of Cuba. Also coming from Havana are educators and cultural emissaries from Cuba’s CNEART (Centro Nacional de Escuelas de Artes) and the Ministry of Culture, a partner organization to The Horns Project.

“We taught ENA’s music students in January and saw real progress in their understanding of jazz,” said Victor Goines, Director of Education for The Horns Project. “In Cuba, there isn’t instruction in jazz traditions, so being able to study with master musicians at Jazz at Lincoln Center is an incredible opportunity as is performing in New York City. This Amistad residency is going to advance their understanding in great ways.”

Goines is also director of jazz studies at Northwestern University and a member of the Jazz at Lincoln Center Orchestra.