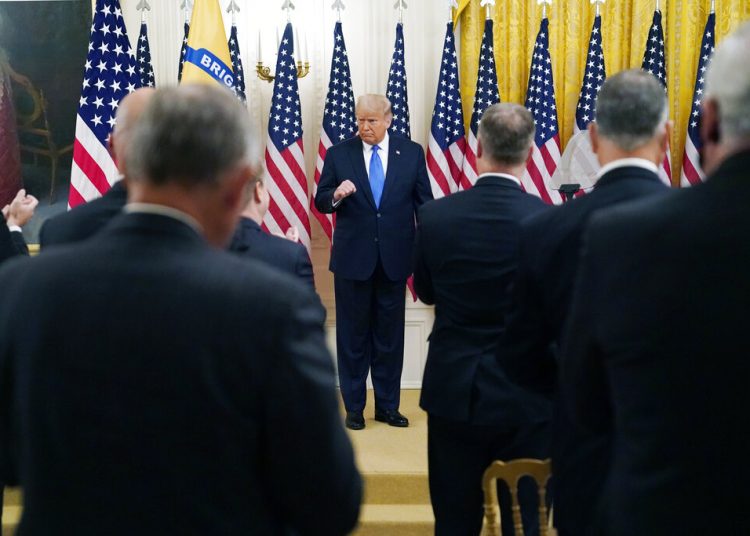 President Donald Trump speaks during an event honoring Bay of Pigs veterans in the East Room of the White House, Wednesday, Sept. 23, 2020, in Washington. Americans traveling to Cuba will not be able to stay in hotels or return home with cigars or rum, according to a series of new sanctions announced by Trump that seek to economically suffocate the island’s government. Photo: Evan Vucci/AP

Forty days before the presidential elections, the Donald Trump administration has just closed the circle of restrictions on Cuba by prohibiting Americans who travel to the island from staying in hotels owned by the government and from bringing bottles of rum and boxes of cigars upon their return home.

Until now, the only accommodation restrictions covered facilities under military administration that came into effect last November with the creation of a “black list.”

This new list will encompass what was left out of the previous one, government-owned hotels and restaurants, and includes establishments run by government officials, members of the Communist Party, their family members and other relatives. The Office of Foreign Assets Control (OFAC) announced in a new resolution that it has just created another “black list,” the Cuba Prohibited Accommodations (CPA) List to register the names and addresses of government properties. Both lists are the responsibility of the State Department.

This new package of measures was designed to prevent Americans and residents who travel to the island from frequenting facilities owned by the Cuban government and also make changes to some details of the travel to Cuba categories. For example, the general license for participation in academic conventions, seminars to go to study or research the island, participating in congresses or cultural events and some sporting events, for which travelers need a specific license.

Travel agencies are also not authorized to make reservations at government facilities.

The package does not explicitly prohibit accommodation in private properties, but the CPA already includes 433 hotels and properties, and includes at least a private accommodation, Casa Vida Luxury Holidays, apparently owned by Vilma Rodriguez, a granddaughter of General Raúl Castro, first secretary of the communist party.

This Wednesday, President Trump announced the measures at the White House, during a meeting with former members of Brigade 2506, the army of exiles that invaded Cuba through Playa Girón in 1961. “These decisions ensure that U.S. dollars will not finance the regime but rather go directly to the Cuban people. That’s a big difference,” Trump said.

In the speech, the president complained that “the Obama-Biden administration made a weak, pathetic, one-sided deal with the Castro dictatorship that betrayed the Cuban people and enriched the communist regime. I cancelled the Obama-Biden sellout to the Castro regime. We will not lift sanctions until all political prisoners are freed, freedoms of assembly and expression are respected, all political parties are legalized, and free elections are scheduled,” which is not properly a novelty because it’s one of the conditions reflected in the Helms-Burton Act since 1996.

According to the president of the U.S.-Cuba Trade and Economic Council, John Kavulich, in these times of pandemic the measure has a limited scope because COVID-19 has limited Cuban tourism and even direct flights are interrupted and is not known for how long.

“This does not disappear the buildings but the people. But, curiously, it does raise some opportunities. One is that Cuba may begin to receive proposals from other countries to sell the properties, the hotels. Cuba could access and stay with collecting annual real estate taxes. It is something very common in many countries,” explained Kavulich. After all, “this can encourage Cuba to sell its hotels to foreign companies, European, Asian” and take some time to prepare for the end of the pandemic and the return of tourists.

In turn, in Havana, former Cuban diplomat in the European Union Carlos Alzugaray told OnCuba that we are facing more of the same. “The new sanctions issued by Trump confirm the irrational and cruelty of the policy he is following. It is also useless at this time, when it is impossible to travel between Cuba and the United States. I have called it a regime change with prejudice,” he said.

In his opinion, “the objective is the same, to harass the Cuban economy in the hope, already proven futile, that it will provoke despair and the overthrow of the government. The only thing it does is reinforce the Cuban will to resist. The Cuban people will not bow,” added Alzugaray.

Before the weekend, Trump is supposed to travel to South Florida and over the weekend appoint a judge to the supreme court. On the list of applicants is Cuban-American Judge Bárbara Lagoa. A Democratic source told OnCuba that the new restrictions put an end to their hopes. “She has no chances, these restrictions are Trump’s electoral gift and the confirmation that he doesn’t feel sure of victory. These measures have no practical effect, mainly in the midst of the coronavirus, but something had to be invented and at the electoral level the measures are stronger than a judge in the Supreme Court that the Republicans already controlled,” said the source.