According to the Miami-Dade County poll, Biden is leading 55% vs. 38%, that is, a difference of 17 points, which places him outside the margin of error of 4.4. Most importantly, Biden is leading among Miami Dade’s non-Cuban Hispanic voters 58% vs. 32%. Here, as the poet would say, there’s nothing to do. 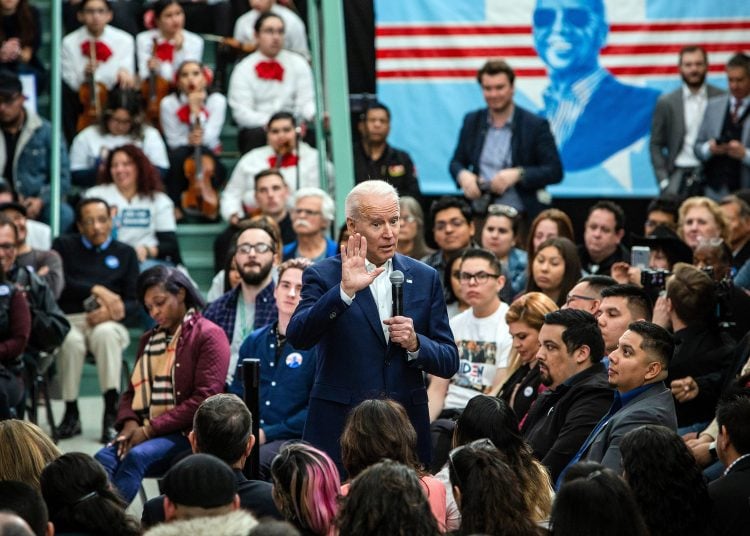 It’s almost commonplace to affirm that Hispanics/Latinos will become the largest minority voting group in the United States during this year’s election. Indeed, this is a record 32 million people eligible to go to the polls, representing 13.3% of all voters. This figure includes a large number of voters in swing states like Colorado, Nevada, Arizona and Florida. In the latter, Hispanics/Latinos make up nearly a quarter of voters.

Well-known actress and presenter Eva Longoria repeated it to those attending a Democratic rally in Kissimmee, Florida, when Biden was campaigning on the important I-94 corridor, which connects Tampa with Orlando and Daytona Beach. “This year, for the first time in history, Hispanics will be the largest minority group of potential voters in the United States, Latino voters will decide the 2020 elections, that is a fact. Not only do I want Trump to be removed from office, I want the Latino community to be the decisive group to remove him.” Biden, for his part, said: “More than any other time, the Hispanic community, Latino community holds in the palm of their hand the destiny of this country. You can decide the direction of this country.”

It is, by definition, one of the sociodemographic groups on which many of the anti-immigrant constructs of the present time have fallen and still fall, endorsed on various occasions and in different settings by the figure of Donald Trump since his 2016 electoral campaign. As is known, one of the most vociferous consists in spreading the idea that Mexicans who cross the border illegally—actually an old rhetorical figure that does the whole thing—are, overwhelmingly, criminals, murderers and rapists. The feedback of that discourse is the actions of the executive branch such as trying to dismount/deport the young dreamers, a result of immigration policies of the Obama administration that have been and still are the subject of many times controversial decisions of the judicial system.

Other racist constructs also hang over the Latino vote, such as those related by Michael Cohen, Trump’s former personal lawyer, in his book Disloyal, according to which the president would have snapped at him that he wouldl never get the Hispanic vote, adding that like blacks, they are too stupid to vote for Trump and that they weren’t his people. And that they have a multilateral impact on that community, beyond their immigration status.

However, it would be wrong to conclude that Hispanics/Latinos constitute a monolithic bloc. Viktor Reklatis has written that people assume that being Republican and Latino is a contradiction in terms…. That there have always been Latinos attracted by Republican values ​​and policies…. And that he didn’t think it’s exciting to say, but Latino voters are in many ways like everyone else: very diverse, and their vote is based on a combination of their own interests, aspirations, political opinions, religion, and notions of belonging and identity. The expression “Latino Republican,” one scholar rightly says, is not, of course, an oxymoron.

The Latino vote in Florida

In the 2016 presidential election, Trump beat Hillary Clinton in the state of Florida by a narrow margin (49% vs. 47.8%). Several analysts of this year’s elections anticipate that it could again be crucial in the final results, depending on how the process behaves at the national level and especially in the rest of the swings states. Florida, as it is known, contributes 29 electoral votes. Traditionally, Latinos/Hispanics have been Democratic voters, minus Cubans, especially those living in South Florida.

For Democrats, the problematic data is that Joe Biden has the weakest Latino support of all their recent presidential candidates. An NBC News/Marist poll of Latino voters in Florida from eight weeks before the election found that Trump was four points ahead (50% vs. 46%). And that among all Florida voters the Democratic challenger and the Republican incumbent were tied with 48% support. In an average of RealClearPolitics polls, Biden was slightly higher at 48.7% versus Trump’s 47.1%.

The presence of Biden in the aforementioned corridor, which is characterized by its high concentration of Hispanic/Latino population, and especially Puerto Ricans, then responded to the fact that at that point his performance among Hispanics/Latinos was quite poor compared with that of Hillary Clinton, Barack Obama and Bill Clinton, which sparked alarm among members of the Democratic leadership and officials of his campaign.

Indeed, in 2016 Hillary Clinton had won 66% of the Hispanic/Latino vote, but that percentage represented, in itself, a drop compared to the 71% of Hispanic/Latino voters who in 2012 supported Barack Obama’s re-election. Biden was then well below the float level. In that context, billionaire and former Democratic presidential hopeful Mike Bloomberg announced he would donate 100 million dollars just to help him win Florida. “What we’re doing in Florida, and across the country, is giving Hispanic voters a reason to vote for Joe—from finally addressing the Covid-19 crisis that has disproportionately impacted Hispanic families, to his commitment to protecting Dreamers—and we’re doing it in Spanish and in English, on TV, radio, digital and in the mail, and through culturally targeted outreach that has already grown a large and vibrant Hispanics for Biden coalition,” said Christian Ulvert, a strategist for the Biden campaign.

A few weeks later, apparently Biden’s trip to Tampa and the I-4 corridor, plus the strategy enunciated by Ulvert, yielded their first results, not only as a result of political actions but mainly of logistics and material base. According to news reports, to date Biden’s campaign has spent more than Trump’s on television advertising in Florida during this cycle―between 30 million and 42 million dollars, according to political ad tracker Kantar/CMAG. The last poll of Latino voters that I know of, by NBC News, The Wall Street Journal and Telemundo, based on a sample of 300 voters between September 13 and 16, yielded the following results, with an estimated margin of error of 5.66 percentage points:

One variable to consider in Florida’s results will undoubtedly be the behavior of the young vote. According to a Telemundo/BuzzFeed News poll in Spanish and English between June 5 and June 22, young Latino voters support Biden. And if the election were tomorrow, 60% of Hispanics/Latinos between the ages of 18 and 34 would vote for him. Only 19% declared they would vote for Trump. According to this poll, half the young Latinos in Florida are Democrats: only 13% identify as Republicans and 7% identify as “other parties.”

These data are consistent with a national poll published last Monday, September 21: 60% of potential voters under 30 said they will support Biden in November, while 27% said the same of Trump. An interesting note is the aforementioned: Obama’s vice-president does better with young voters than Hillary Clinton at this point in the presidential race.

And the Cuban Americans?

Forecasts indicate that the Cuban-American vote, especially that of Miami Dade, one of the counties with the highest concentration of Cubans, along with Broward, Hillsborough and Palm Beach, will vote for Donald Trump. This would not only be a result of their historical alignment with the Republican Party, but also of a consistent propaganda that identifies Joe Biden as a weak individual, co-opted by the radical left and by socialism/communism, a construct impossible to assimilate considering his moderate trajectory and the process of decantation of “radicals” that took place during his party’s primaries. 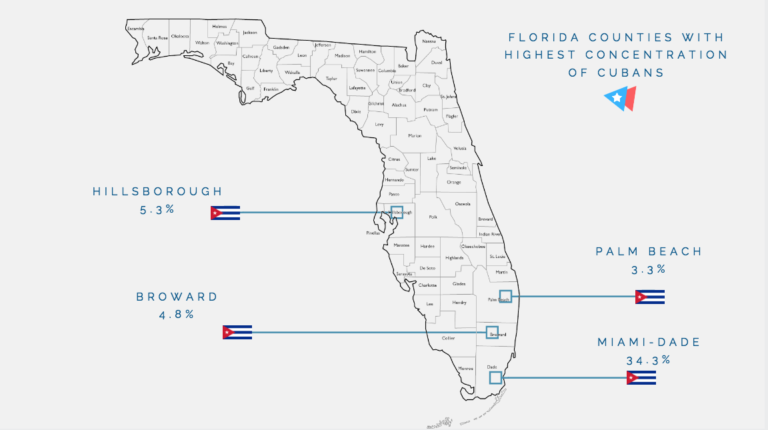 A quick look at the political ads broadcast on Hispanic TV, especially one narrated by Cuban actress Susana Pérez, reveals Biden’s identification with elements of the radical discourse associated with the demonstrations for the murder of George Floyd. One consists of socializing the idea that the Democratic candidate supports the dismantling of the police, an element that Biden himself has repeatedly denied and which is, in fact, one of the few issues on which both candidates agree.

But all that electoral propaganda is effective insofar as it resorts to emotional psychological strings rooted in the culture of the Cold War, long-standing in the United States, and to the exploitation of fear, a word at the epicenter of the Republican strategy. Its National Convention, held a few weeks ago, gave ample evidence in this regard, stating such things as that Biden and the Democrats wanted to “sell the country to communist China and cancel American culture”; that Donald Trump was the “guardian of Western culture”; that it was imperative to save the United States now because “we can lose it forever”; that re-electing the current president would ensure “that our children are raised to love America.” And last but not least, this little gem: that the Democrats wanted to control “how many hamburgers you can eat.” These and similar messages, for obvious reasons, also find an echo among immigrants and voters from Venezuela and Nicaragua.

Indeed, a reference to the results of a poll by Bendixen & Amandi International and the Miami Herald, carried out among 500 potential voters, found that support for Trump among Cuban Americans was overwhelming in Miami-Dade: 68% vs. 30%. The data has been used in some forums, especially on social networks, to denote a victory for the president in that county, despite the fact that nothing suggests that it would wear red in the upcoming elections. And much less that it would greatly alter the results in Florida, unless it is a photo finish. It is already known that in that state the political mathematics to win the elections has been a constant for decades: Republicans accumulate more votes in the north and southwest of the peninsula, Democrats dominate in the large population centers of the south, and both parties fight in the high-growth areas along the I-4 corridor. That is, in all likelihood, the same dynamic that we will see in this year’s elections.

However, it should be emphasized that this Cuban-American support is not universal either, since the community is far from being a monolith. “Amid evidence that Trump has significantly expanded his support among Miami-Dade’s traditionally conservative Cuban exile community,” wrote David Smiley in  The Miami Herald, “a counter-movement is afoot to show that there are thousands of Cuban-Americans in Florida who believe the president does not have their best interests at heart.” Trying to somehow counter the simplistic message, former Republican strategist Ana Navarro-Cárdenas told the media: “Joe needs to come to South Florida, look us in the eye and combat the ridiculous Republican narrative that he’s some sort of socialist.”

Lastly, according to the Miami-Dade County poll, Biden is leading 55% vs. 38%, that is, a difference of 17 points, which places him outside the margin of error of 4.4. Most importantly, Biden is leading among Miami Dade’s non-Cuban Hispanic voters 58% vs. 32%. Here, as the poet would say, there’s nothing to do.

This is, in short, the dynamics of Joe Biden with the Latino vote in Florida with about 40 days to go until the presidential elections. The challenges facing the Democratic candidate are then clear.