Since its July reopening, the restaurant, with its streamlined staff and dearth of competition, has managed to make a small profit, a miracle in the circumstances. 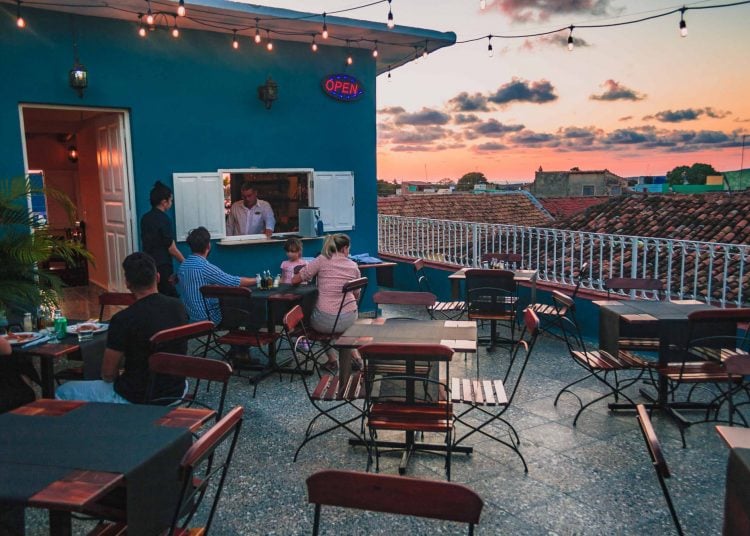 I first visited Muñoz Tapas in Trinidad in July 2019 several weeks after its initial launch. As a long-time friend of the restaurant’s owner, Julio Muñoz, I had stopped by on my way between Cienfuegos and Santa Clara for a quick lunch.

Situated at a central crossroads in Cuba’s premier tourist town, the restaurant is blessed with a location to die for and sunset views to match. Sitting on an open-air terrace overlooking Trinidad’s red-tiled rooftops, I enjoyed ropa vieja tacos, tres leches cake and an ice-cold Cristal beer with the Escambray Mountains silhouetted in the background. It was a satisfying and very relaxing experience.

As I sipped a post-lunch cafecito and chatted with Julio about his future plans, I couldn’t help thinking that, despite the challenges of a tightening US embargo and fierce competition from around 100 other eating establishments in Trinidad, the prospects for his new restaurant looked good.

On March 20, 2020, threatened by the fast-spreading global pandemic, Cuba closed its borders to international travelers and battened down the hatches for three months of strict lockdown. In a country where tourism is second only to healthcare as an economic provider, the fallout was severe.

Particularly affected were Cuba’s 600,000 cuentapropistas (private entrepreneurs) many of whom work in the tourist sector, renting out private rooms (in casas particulares), driving taxis, or running restaurants.

Lockdown meant private restaurants including Muñoz Tapas were forced to close as business in Trinidad ground to a halt and food supplies, most of which came from other municipalities, became scarce. In an attempt to provide some relief, the government temporarily lowered business taxes, but with the economy already weakened by the US embargo and the demise of Cuba’s key trading partner, Venezuela, the outlook didn’t look good. ‘We had no form of income’, said Julio who, before Covid, also ran a casa particular and an equestrian center, ‘So every day my family was constantly analyzing the various business possibilities to see what might work.’

There were numerous barriers. Without international visitors, many private entrepreneurs in Cuba had nothing to fall back on. The country has very little domestic tourism. Most Cubans receive their salaries in pesos and simply can’t afford the prices in traditional tourist establishments which charge in convertibles (the peso/convertible exchange rate is 25:1). Consequently, they cook at home or eat in cheap (and inferior) state-run restaurants.

Fortunately, in the wider Covid-19 battle, Cuba had two weapons in its armory: a well-organized health system and populace accustomed to dealing with economic difficulties. The collapse of the Soviet Union in the 1990s coupled with a long history of shortages and rationing have hardened Cuba’s resistance to economic crises. The pandemic was a shock in a country that is painfully used to shocks.

After registering a relatively light number of Covid cases, Cuba began a tentative reopening in early July, albeit with a few niggling caveats. While Cubans could move around the country freely outside of Havana, foreign visitors were confined to a few isolated resorts on the country’s northern keys. Trinidad and all other Cuban cities remained strictly off-limits to tourists.

Nevertheless, Julio, with the help of his wife Rosa Orbea, stuck his neck out on July 8th and decided to reopen his restaurant. With zero tourists and a wholly Cuban clientele it was gamble. But with a strong background in business – Julio was one of a handful of Cuban cuentapropistas invited to meet US president, Barack Obama in 2016 – he felt he could make it work.

From the restart, significant changes had to be made. Prices at the restaurant were lowered by between 40% and 50% and the menu was creatively redesigned to satisfy Cuban palates. Due to high labor taxes, the workforce had to be cut by half.

While the economic climate was challenging, Muñoz Tapas had a head-start. Despite the lure of the tourist dollar, the restaurant had always gone out of its way to attract Cubans as well as international clients.

It was a foresighted policy. Julio once told me that to be successful in this most unpredictable of countries it is necessary to always have ‘un paso adelante’ (one step forward) as it’s impossible to tell what’s around the next corner. It was a philosophy he employed early on at Muñoz Tapas. where 20% to 30% of his customer base was Cuban. ‘We gave discounts to Cubans, served dishes to suit all tastes and budgets, and offered generic service across the board, whether people were ordering an expensive dish or a cup of coffee,’ he explained. ‘Re-opening during the pandemic thus became easy because we had already created a good reputation among Cuban customers, something that other restaurants hadn’t.’

Another advantage was the restaurant’s design. An open-air terrace and a spacious interior salon with large windows allowed adequate ventilation and room for physical distancing. As a precaution staff wore masks and gloves, hand sanitizer was provided at the door, and a special entrance mat disinfected shoes.

With only a dozen of Trinidad’s 100 or so tourist-dependent restaurants electing to reopen in July, there was a lot less competition in the town’s new Covid reality. Notwithstanding, the supply chain continues to be a constant headache.

‘Everything is in short supply’, Julio recently told me. ‘The new US dollar stores [first opened in July] are the only way of acquiring basic products such as flour, cooking oil, and spaghetti. But we face a lot of difficulty obtaining US dollars because there’s no international tourism and, due to the embargo, there’s no easy way of receiving money from abroad. The embargo is having a big effect on people in Cuba and damaging private business.’

So that customers don’t have to constantly suffer the tiresome Cuban refrain of ‘no hay’ (there isn’t any) or ‘se acabó’ (it’s finished), Julio’s menu only offers what he has in stock that day: ‘We have a general menu, but we modify it depending on what is available. As our style is farm to table, we buy things early in the morning and, when we have decided what we will be able to make, we change the menu accordingly and reprint it.’

Recommendations and photos are posted daily on Facebook and Instagram. Subject to ingredients, the restaurant still serves ropa vieja and tres leches cake; pizzas go for the equivalent of US$1.50, a Cuban sandwich costs US$2 – and yes, you can still get a decent mojito. 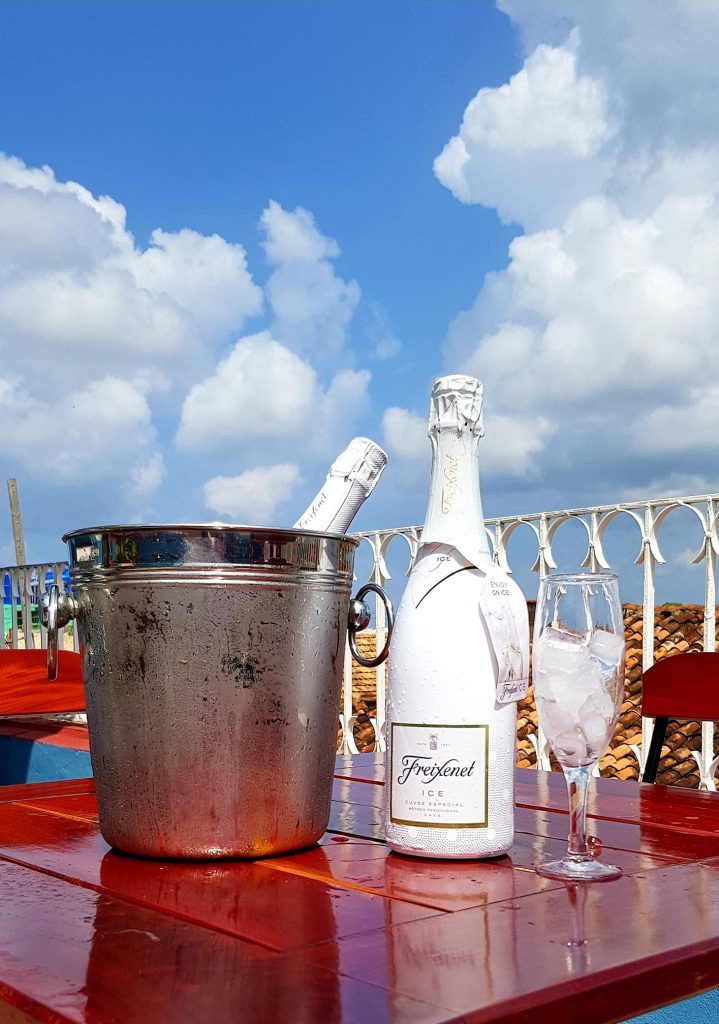 Since its July reopening, the restaurant, with its streamlined staff and dearth of competition, has managed to make a small profit, a miracle in the circumstances.

Ironically, Julio puts part of his success down to US-Cuban cooperation. ‘Our capacity to evolve with the circumstances and run a business efficiently is due, in part, to our contact with guests on People to People trips initiated by the Obama administration. Through these exchanges with Americans, my family and I learned a lot about the tourist industry and restaurants’.

People to People trips (cultural tours run through US-based companies) were first permitted by Obama in 2011 but discontinued by Trump in 2019. Julio hosted many of them at his Trinidad home.

What happens next in Cuba is difficult to foretell. Tourism is only likely to return to pre-pandemic highs once the virus is properly under control.

In the meantime, private entrepreneurs face a tough time adapting to a less tourist-dependent market. Political changes could help. In the long term, some Cubans hope that the Covid crisis will have a catalytic effect, pushing the government to initiate reforms aimed at stimulating self-sufficiency and more business freedom.

In some ways, the current situation is not dissimilar to the Special Period in the 1990s. Julio agrees, but only up to a point: ‘The big difference between the Special Period and the Covid crisis is that the Special Period was only in Cuba; there were countries that could still help us economically. Covid is a global crisis, there is no country that can directly help.’

Nevertheless, he remains optimistic. ‘For us it has been a very important experience to have opened Muñoz Tapas in a time of crisis and make it profitable while maintaining high quality.’

It’s certainly an interesting precedent. The road ahead will not be easy, but Cubans have long been survivors by nature and necessity. If anyone can get through this crisis with their livelihoods and integrity intact, they can.