The legislation "repeals key provisions of previous acts that prevent Americans from doing business in Cuba" and would allow Cubans "greater access to U.S. products." 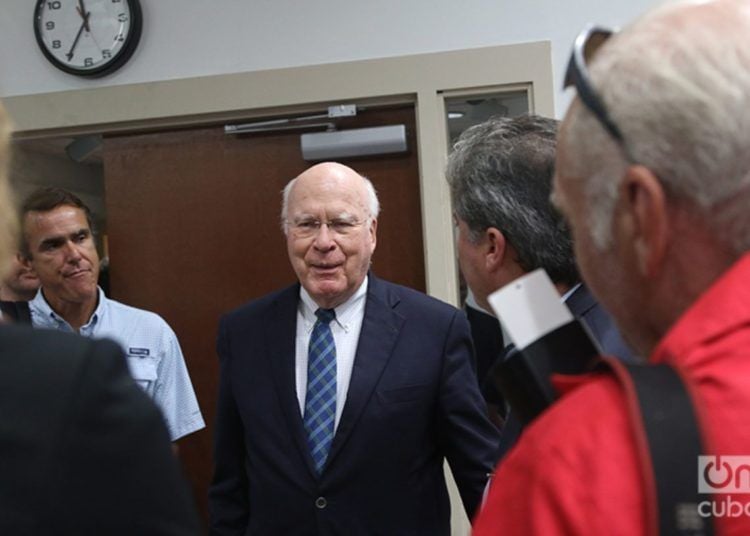 Senator Patrick Leahy during a visit to Cuba in 2017. Photo: Ismario Rodríguez.

A bipartisan coalition again presented in the U.S. Senate a bill against the U.S. embargo on Cuba.

Senators Amy Klobuchar (D-Minnesota) and Patrick Leahy (D-Vermont), and Mike Enzi (R-Wyoming), reintroduced the initiative of the Freedom to Export to Cuba Act, which had already been filed in 2015 and 2017, although without materializing.

If approved, the proposal would “eliminate legal barriers for Americans to do business in Cuba and would pave the way for new economic opportunities for businesses and farmers by boosting U.S. exports,” says a press release from Senator Leahy. one of the main proponents of bilateral rapprochement.

In addition, it would allow Cubans “greater access to American products.”

The legislation “repeals key provisions of previous acts that prevent Americans from doing business in Cuba, but does not repeal parts of the act that address human rights or property claims against the Cuban government,” as in previous presentations, explains the press release.

“Instead of looking to the future, U.S. and Cuban politics have been defined for too long by the conflicts of the past,” Klobuchar said in promoting the initiative.

The Democratic legislator affirms that “lifting the trade embargo will open the doors to a large export market, create jobs here at home and support the U.S. and Cuban economies” with which “the page of the failed policy of isolation will finally be turned and will be based on the progress we have made to open the commitment to Cuba by ending the embargo once and for all.”

For his part, Senator Enzi remarked that, as “history has shown,” “the Cuba embargo has not been very effective” and the legislation “would provide new opportunities for U.S. companies, farmers and ranchers.”

“We need to open the dialogue and the exchange of ideas and trade that will help Cuba advance. It is time to work towards positive change,” he added.

It would provide new opportunities for American businesses, farmers and ranchers. We need to open dialogue and the exchange of ideas and commerce that would help move Cuba forward. It is time to work toward positive change. https://t.co/pbCUMEBcPW

Meanwhile, Leahy, critical of the sanctions of the Trump administration against the island, considered that Cuba is “a small neighboring island that does not represent a threat” to the U.S. and that even though “Obama took a courageous and pragmatic step to open diplomatic relations,” “President Trump has restored the failed isolationist policy of the past.”

“The lifting of the embargo will put more food on the plates of the Cuban people, allow them to access quality products from the United States and encourage reforms in Cuba’s economy, while benefiting U.S. companies,” and at the same time avoiding “justifications” by the Cuban government and foreign companies, explained Leahy.

The bill has been endorsed by entities such as Engage Cuba, the Washington Office for Latin America, the Latin America Working Group and the Cargill Corporation.

However, as in its previous presentations, it seems to have few opportunities to advance in a Senate dominated by Republicans and in which figures such as Senators Marco Rubio (R-Florida) and Bob Menéndez (D-New Jersey), with Cuban roots and strong critics of a rapprochement with Havana, exercise influence.