The Cuban Academy “is exemplarily dedicated even though resources are always scarce,” the RAE director said in Havana. 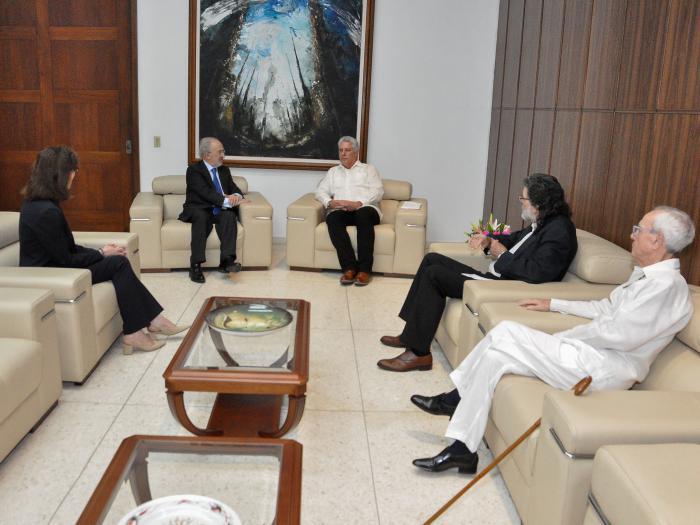 On his first stop of a tour of the Caribbean and Central America, Santiago Muñoz Machado, the director of the Royal Spanish Academy (RAE), met this Saturday with Cuban President Miguel Díaz-Canel Bermúdez.

He was accompanied by the director of the Cuban Academy of Language (ACL), Rogelio Rodríguez Coronel; as well as by intellectuals and officials Eusebio Leal and Abel Prieto.

The Cuban president referred to the exchange on his Twitter account describing it as: “fraternal, interesting dialogue in which we ratify the will to cooperate.”

The meeting took place shortly after Muñoz Machado’s visit to a regular plenary session of the ACL, where he was conferred the status of full member and after which he made his first statements to the press on the RAE website.

“I just received the reports of the work of the Cuban academy and really the word that works best for me is admirable, it is exemplarily dedicated even though resources are always scarce,” he explained.

This Sunday, the president of the Association of Academies of the Spanish Language (ASALE) toured historic sites in the Cuban capital accompanied by Havana Historian Eusebio Leal Spengler, who in the Palace of the Second Corporal gave him his book of four volumes Para no olvidar, a work on the reconstruction of Havana’s historical heritage.

This Monday, Muñoz Machado visited the University of Havana to present the Pan-Hispanic Dictionary of legal Spanish.

This book, published by Santillana in 2014, is made up of two volumes totaling 2,200 pages with about 40,000 vocabulary entries from all Latin American countries. Its publication meant a milestone in the publication of this type of works.

With this activity, the academician concluded his visit to the island to continue his journey through Panama, Nicaragua, Guatemala, El Salvador, Honduras and the Dominican Republic.