There are already countries interested in acquiring it, such as Vietnam, Iran and Venezuela, among others, with which the island has collaboration agreements, including Pakistan and India, according to the director of the Finlay Institute. 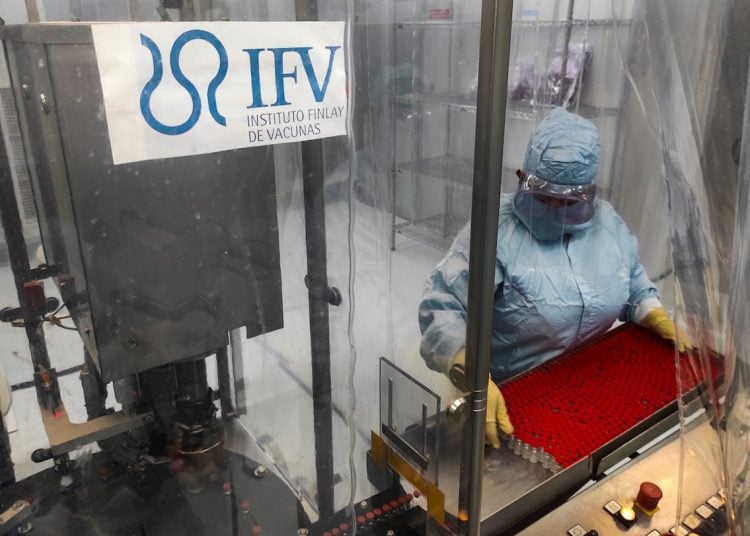 Cuba will produce this year 100 million doses of its Soberana 02 vaccine against the new coronavirus in order to meet its own demand and that of other countries, a leading scientist reported this Wednesday.

“We are reorganizing our productive capacities because we really have a lot of demand for the vaccine and we have to prepare ourselves,” the director of the Finlay Institute, Vicente Vérez, confirmed to a group of journalists at a conference which included a tour of the laboratory that manufactures the drug against COVID-19.

The Finaly Institute created Soberana 02 and Soberana 01, the latter in a less advanced research phase. Other biotechnology centers on the island are working on two more vaccine candidates called Abdala and Mambisa.

The 100 million doses planned would be only of the Soberana 02 and there are already countries interested in acquiring it, such as Vietnam, Iran and Venezuela, among others, with which the island has collaboration agreements, including Pakistan and India, said Vérez.

This week began the second part of a Phase II trial of this product with 900 patients—added to a hundred from the first phase—in a polyclinic in the capital, The Associated Press confirmed the day before.

The volunteers—a group of them received a placebo as part of the study, although once it is finished they will be immunized with the real vaccine—said they had not reported discomfort. Some neighbors from the polyclinic even came to volunteer as part of the trial.

After being injected, the people—ranging from 19 to 80 years of age—waited in the same polyclinic before returning home and were followed up at 24, 48 and 72 hours.

Vérez stressed that the antigen is safe after noting that it does not contain the live virus but parts of it, so—according to the expert—its placement generates immunity but does not cause major reactions and, therefore, does not need extra refrigeration, like other candidates of the world.

Meanwhile, Finlay researchers are working with countries such as Italy and Canada to verify the impact of these vaccines—especially Soberana 01—on people who already had COVID-19 and are convalescing but are at risk of reinfection. Likewise, the efficacy is being evaluated in the face of the impact of new mutations such as the one described in Great Britain, Japan or California.

For the next few weeks, the vaccination will be extended to 150,000 people on the island, Vérez confirmed, on the way to mass immunization and a test will be carried out in February to protect children with Soberana02, he said.

After several months of keeping the pandemic under control, Cuba suffered an outbreak at the beginning of the year, after the opening of its airports and despite having a preventive health protocol. From March to date, there have been 19,122 infections and 180 deaths on the island.

The scientist did not give details of the price the vaccine will have for sale to other countries. In Cuba their placement is free and voluntary.

Despite being a small country, Cuba has a developed scientific center that produces almost all the vaccines it needs and state-of-the-art medicines.

“Cuba’s strategy to commercialize the vaccine has a combination of humanity and of an impact on health and the need for our system to (financially) support the production of vaccines and drugs for the country,” said Vérez.

“We are not a multinational company where (financial) return is the number one reason,” he added: “We work in reverse, to create more health and return is a consequence, it will never be the priority.”