Until last October 14, 23,920,914 doses against COVID-19 had been applied on the island, a figure that includes both mass vaccination, as well as health intervention processes, intervention studies and clinical trials developed in the country, according to official sources. 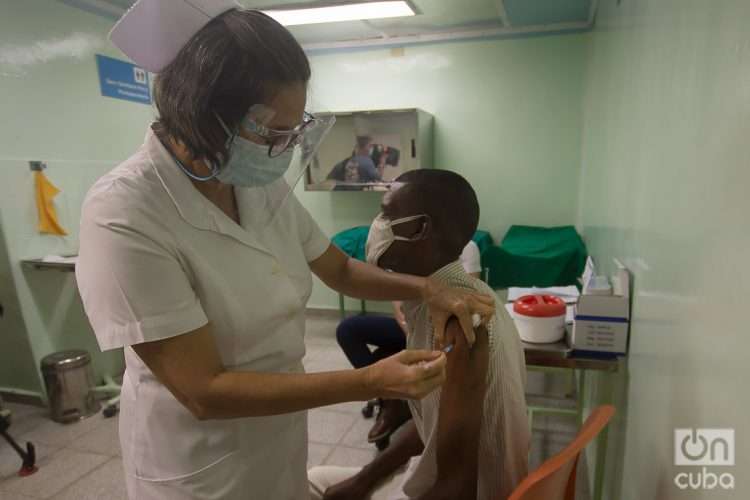 99% of Cuba’s population that can be vaccinated has already received at least one dose of an immunogen against COVID-19, according to official sources.

This concept does not include those who for different reasons — such as health problems, not being included in the age range now immunized or being out of the country — cannot be vaccinated at this time.

A total of 9,688,764 people had received the first dose against COVID-19 on the island until October 14, according to data from the Ministry of Public Health (MINSAP), cited by the Agencia Cubana de Noticias (ACN) news agency.

Until that same date, 23,920,914 doses against COVID-19 had been applied on the island, a figure that includes both mass vaccination, as well as health intervention processes, intervention studies and clinical trials developed in the country.

The ACN specifies that 13,585,498 doses had been administered as part of the mass vaccination, while the health intervention included 9,614,886, and the intervention study, 454,064. On the other hand, in the clinical trials carried out with the then Abdala, Soberana 02 and Soberana Plus vaccine candidates, 266,466 doses were applied in the provinces of Havana, Santiago de Cuba, Granma and Guantánamo.

For several months, Cuba has been carrying out an extensive process of immunization against COVID-19 with its own drugs, although in some provinces doses of the Chinese Sinopharm vaccine have also been administered. The authorities aim to reach 90% of Cubans fully vaccinated next November and to immunize the entire population that can be vaccinated before the end of the year.

After a sustained pandemic peak for months, cases of the infectious disease have begun to decline in recent weeks, and at the close of this Friday they fell below 2,000 a day for the first time since June. The specialists affirm that this is the result of the vaccination, although they call to maintain precautions to avoid a re-outbreak, at a time when the country is carrying out a new de-escalation.