The parties considered that this measure affects both the Cuban people and the economic and commercial interests of the EU, according to a statement released by the Cuban Foreign Ministry. 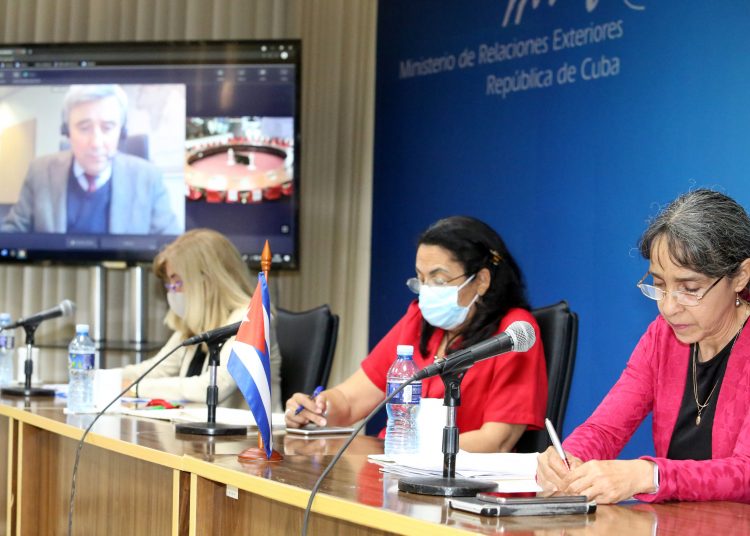 Cuba and the European Union (EU) ratified this Thursday its willingness to hold a dialogue on unilateral coercive measures based on full respect for “sovereign equality, independence, legality and non-interference in the internal affairs of states,” said Havana’s Ministry of Foreign Affairs.

During the third round of the dialogue on Unilateral Coercive Measures—held virtually—delegations of the Cuban government and the European bloc debated in a “respectful and constructive” atmosphere about the damages caused by the U.S. economic, commercial and financial embargo on Cuba.

The parties considered that this measure affects both the Cuban people and the economic and commercial interests of the EU, according to a statement released by the Cuban Foreign Ministry.

The island’s representation thanked the EU for its support for the United Nations resolution that demands the end of the “U.S. blockade,” as well as its condemnation in international meetings of the application of Titles III and IV of the Helms-Burton Act, and the denunciation of Cuba’s inclusion in Washington’s list of state sponsors of terrorism.

The statement points out that the essential segment of the Dialogue was the exchange on existing regulatory provisions in the EU and its member states to counteract the extraterritorial dimension of the coercive measures applied by the United States to the island. In this sense, the parties also addressed Regulation 2271/96 of the Council of the European Union, as well as other initiatives that could be developed to face the extraterritorial application of the Helms-Burton Act.

This 3rd round of the Dialogue on Unilateral Coercive Measures gave continuity to the meeting held in November 2019 in Havana and is framed in the Political Dialogue and Cooperation Agreement (ADPC) between Cuba and the EU.

At the end of last February, Havana and Brussels held their third round of the Dialogue on Human Rights, a month after they held the 3rd Joint Council, in which they took stock of their bilateral relations, explored cooperation priorities during the next seven years and debated on the implementation and follow-up of the political dialogues and sector policies established in the APDC.

Cuba and the EU relaunched their relations with the signing in 2016 of the historic Agreement on Political Dialogue and Cooperation, provisionally in force since November 2017, and which ended 20 years of a restrictive “common position,” which conditioned the community bloc’s relations from with the island to the advances in human rights and democracy in the Caribbean country.

The EU is one of the Caribbean country’s main trading partners, with a total volume of exchange that exceeds 35% of its operations, in sectors such as sustainable agriculture, renewable energy, health, social and economic modernization and tourism.