The cetacean was found this Thursday morning by residents of the place who, together with members of the coast guard, were taking care of the animal and trying to return it to the sea. 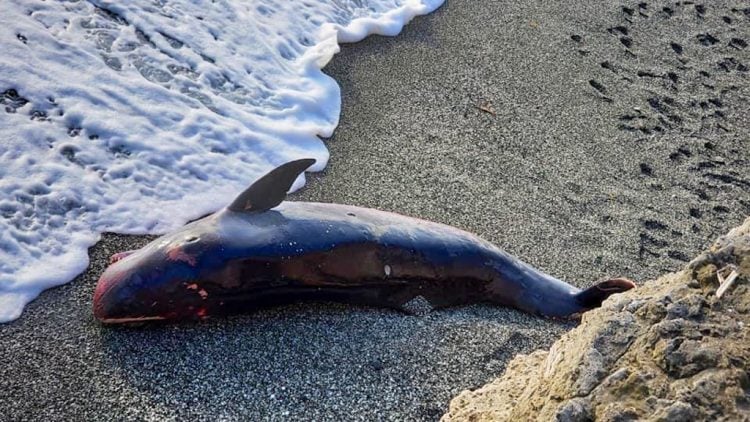 An injured sperm whale appeared on the beach of the Guantánamo city of Baracoa. Photo: Miguel Noticias/Facebook.

A sperm whale with several wounds on its body appeared this Thursday washed up on the sand of the Caribe beach, in the municipality of Baracoa, in the extreme eastern part of Cuba.

The cetacean was found this Thursday morning by residents of the place who, together with members of the coast guard, were taking care of the animal and trying to return it to the sea, Cubadebate reported.

According to the source, it is presumed that the whale reached the coast of Guantánamo dragged by the sea currents, where the impact against the reefs could have caused the cuts.

The appearance of the wounded sperm whale has caused a stir and concern among the inhabitants of the so-called Prime City of Cuba, who associate the arrival of whales to its shores with bad omens.

“History has shown that every time a whale arrives on its coast, natural phenomena attack this city with force,” Cubadebate pointed out in this regard, citing several examples.

In 2008, after two cetaceans were seen from the Baracoa boardwalk, Hurricane Ike and a phenomenon of sea flooding caused innumerable damage to the territorial economy. The locals say that something similar happened days before the impact caused to the area by Hurricane Matthew in 2016.

More recently, in January of last year, a pygmy sperm whale was found dead on another beach in the province of Guantánamo.

That cetacean was 3.20 meters long and weighed approximately 385 kilograms, according to Gerardo Begué, scientific deputy director of the Environmental Services Unit of the province, who specified that the specimen landed on the coast of the Hatibonico Ecological Reserve, located in the Baconao Biosphere Reserve.

According to Begué, in addition to those already mentioned, the arrival of other sperm whales has been reported on the island, including the one on May 29, 2018 in the eastern town of Uvero, in Santiago de Cuba, where two dead animals of the Physeter family (Physeter macrocephalus) were found stranded.

Before, in 2009, a specimen was found dead on the Barigua beach, in Baracoa; and in 1977 a giant sperm whale landed on the coast of Maisí, also in Guantánamo, and its skeleton is exhibited today in the Tomás Romay Museum of Natural Sciences, in the city of Santiago.