The Cuban foreign minister considered that “this action represents a serious escalation in the Middle East region, where a conflict can break out with incalculable consequences for peace and security” in the world. 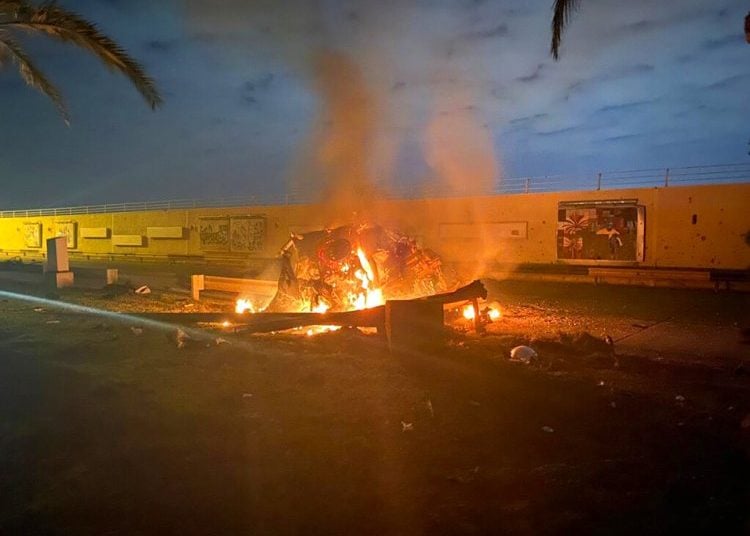 In this image, distributed by the press office of the Iraqi prime minister, a burning vehicle is shown at Baghdad International Airport after an air raid in Baghdad on January 3, 2020. Photo: First Press office of Iraqi Prime Minister via AP.

The Cuban government condemned the U.S. bombing that killed Iranian General Qassem Suleimani and Shiite leaders in Baghdad, and warned of the danger of a possible escalation of violence in the Middle East.

“We strongly condemn the U.S. bombing #vs Baghdad airport and the use of missiles for selective murder,” Cuban Foreign Minister Bruno Rodríguez said this Friday on his Twitter account.

The foreign minister said that “this action represents a serious escalation in the Middle East region, where a conflict can break out with incalculable consequences for peace and security” in the world.

Shortly thereafter, the Cuban Foreign Ministry issued an official statement in which it also “strongly condemns” the U.S. attack in Iraq and “the use of missiles for selective murder, which constitutes a clear violation of international law and that country’s sovereignty.”

In addition, it reiterates the warning issued by Minister Rodríguez on the possible outbreak of “a conflict of great proportions with incalculable losses of human lives and consequences for world peace and stability.”

In this way, the Cuban government joins the international reactions after the U.S. unilateral action, which has been received with concern in Europe and with criticism from countries that feel a strong antagonism towards the Donald Trump government, such as China or Russia.

The Pentagon justified the attack by affirming that the Iranian general was carrying out plans to attack U.S. diplomats and service members in Iraq and throughout the region.

Trump, for his part, also held Suleimani responsible for the death on December 27 of an American contractor in an attack on a military base and for orchestrating the assault on the U.S. Embassy in Iraq.

Iran has promised that it will retaliate and, in response, the U.S. today designated the True League as a terrorist a group affiliated with the Quds Force, devoted to overseas operations and which depends on Iran’s Islamic Revolutionary Guard Corps, already designated as a terrorist group by Washington.

In addition, the Pentagon plans to send between 3,000 and 3,500 soldiers to the Middle East, according to newspaper sources, and carried out a new air attack almost 24 hours after the offensive in which Suleimani was killed. In this incident two vehicles were hit in which members of the Iran-backed militia were traveling and a total of five people were killed.

The Popular Mobilization Forces of Iraq confirmed the attack, noting that it was perpetrated against one of its medical caravans near Taji Stadium, north of Baghdad. The group said that none of its senior officers died in the attack. An American official who spoke under the condition of anonymity said his country did not carry out the attack.