“There is a Walt Disney story of bad government and people fighting for their freedom, stereotypes that scare anyone who has never set foot in Cuba, because of their arrogance and disregard for the truth,” said Johana Tablada, deputy director general of the United States of the MINREX. 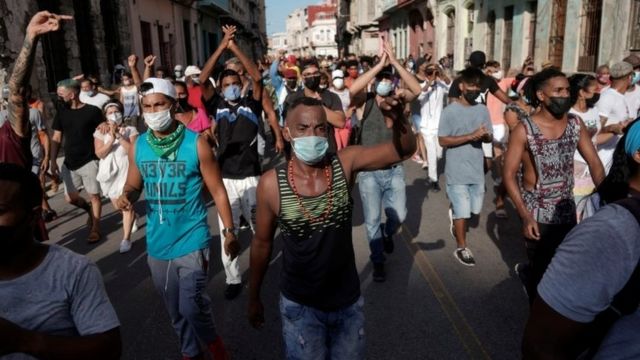 The protests in Havana. Photo: BBC.

Cuba denounced the United States and President Biden for a series of statements by senior officials after protests on the island last week.

The deputy director general of the United States of the Cuban Ministry of Foreign Affairs (MINREX), Johana Tablada, said that U.S. officials are painting a false picture of the situation in Cuba. “There is a Walt Disney story of bad government and people fighting for their freedom, stereotypes that scare anyone who has never set foot in Cuba, because of their arrogance and disregard for the truth,” she told an Associated Press (AP) correspondent in Havana.

“They are very interested in fabricating an alternate reality because the July 11 riots were not enough to justify the war that is being waged against us,” she added.

On July 11, thousands of Cubans took to the streets in various parts of the country. The protests saw peaceful protesters, but also vandalism, destruction of patrol cars, stone-throwing at hospitals, and looting.

Government supporters took to the streets, including tens of thousands who gathered on the Malecón last Saturday.

The police arrested protesters. The authorities have not released a list of prisoners, but Human Rights Watch said in a report this Wednesday that about 500 had been arrested.

The day before, Colonel Víctor Álvarez, from the Ministry of the Interior (MININT), said that some detainees had been released when there was insufficient evidence to prove their participation in the protests, but others were being processed by the judicial system. He did not give figures or other details.

Cuban officials have been insisting that the U.S. sanctions imposed by the Trump administration, and maintained by the Biden administration, are responsible for the shortage of food, medicine and fuel in Cuba.