During the day, there were three deaths, 752 medical discharges and 68 patients in intensive care. 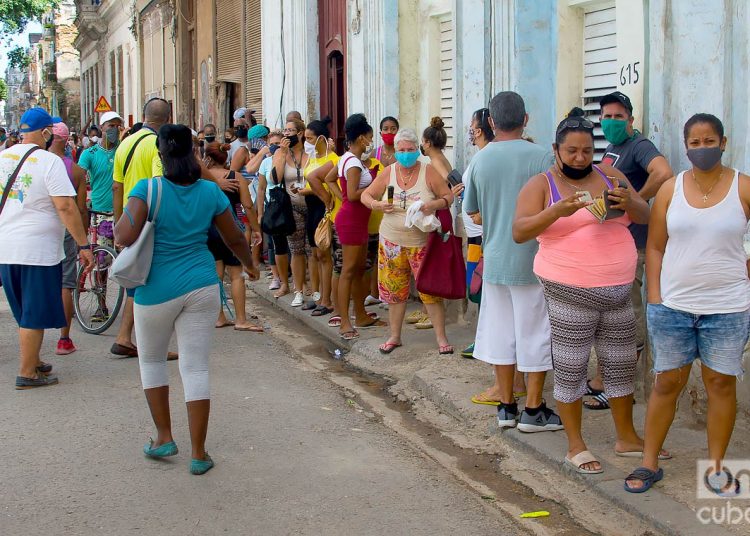 People in a queue in Havana, during the coronavirus pandemic. Photo: Otmaro Rodríguez/Archive.

Cuba reported a total of 750 new cases of COVID-19 at the end of March 5, a figure similar to that of the last few days, according to Dr. Francisco Durán in his usual morning TV appearance, based on data registered in the Ministry of Public Health’s report.

With these numbers, the country reports 54,835 cases since the arrival of the pandemic almost a year ago, while at the moment 22,138 patients remain hospitalized, 13,783 under epidemiological surveillance, 3,809 suspects and 4,546 confirmed cases.

The number of cases responds to the 18,317 samples processed yesterday, which yielded 721 autochthonous cases and 29 with a source of infection abroad, 25 of these detected in the country’s capital with a source of origin from Spain, Russia, Mexico, Italy and Venezuela.

Of the total of 750 patients with the new coronavirus, 710 were contacts of confirmed cases and in 11 the source of infection is not specified.

By provinces, all registered positive cases, although Havana remained with the highest number of infected with 388, with the highest incidence in the municipality of Guanabacoa with 89 cases, even more than in the other provinces that registered higher figures such as Mayabeque (68), Pinar del Río (55) and Santiago de Cuba (47).

Of the total cases, 300 were women and 450 men; 371 were asymptomatic when they were diagnosed, while 122 patients over 60 stand out by age group and in the pediatric age group, seven under one year.

Dr. Durán mourned the death of three people: two from the Cerro municipality in the capital (a 62-year-old woman and a 58-year-old man), as well as an 87-year-old man from Bayamo, Granma.