The Ministry of Public Health reported this Saturday 858 new cases of coronavirus, 890 discharges and four deaths, including a doctor from the Cuban health system. A total of 95 municipalities reported at least one positive case. 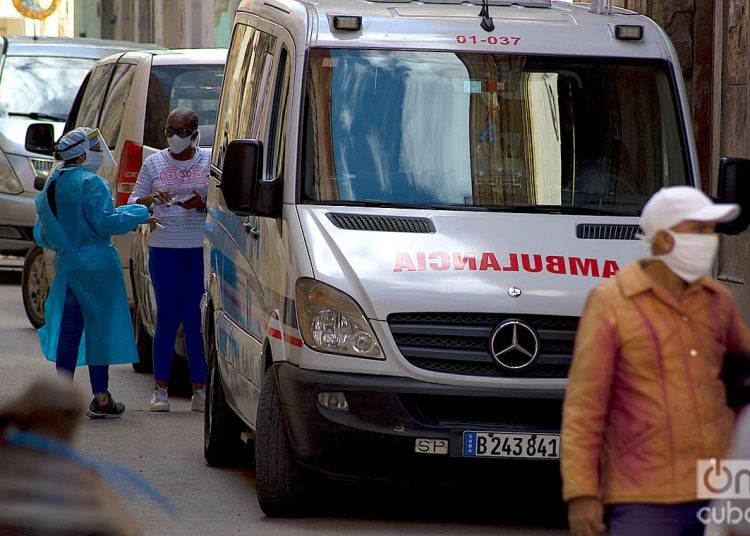 Health personnel in Havana, during the current outbreak of COVID-19, in February 2021. Photo: Otmaro Rodríguez.

The Cuban Ministry of Public Health (MINSAP) this Sunday reported 858 infections from the new coronavirus, bringing the number of confirmed infections on the island to 55,693. After compiling the March 6 data, all the country’s provinces—including the special municipality of Isla de la Juventud—reported at least one positive case, a trend that has often manifested itself in the crudest outbreak of the pandemic on the island.

The MINSAP report details that, of the 858 cases, 846 are autochthonous, the fifth highest figure in the last two weeks. A total of 820 positive cases were contacts of confirmed patients, 12 were imported (from seven countries) and in 26 it was not possible to determine the source of infection, which represents a problem in cutting the transmission chain.

Havana is the most affected territory with 415 infections, five of them imported. Eleven of the capital’s 15 municipalities report more than 20 cases, with red numbers for San Miguel del Padrón (77), Centro Habana (36), Habana del Este (33), Cerro (33), Old Havana (32) and Arroyo Naranjo (30).

Dr. Francisco Durán, national director of Hygiene and Epidemiology, highlighted in a press conference the rise in cases in Sancti Spíritus (18) and Ciego de Ávila (13), and said that Villa Clara (19) and Cienfuegos (13) have managed to decrease the incidence.

For their part, Isla de la Juventud (5), Matanzas (5) and Las Tunas (3) have shown an improvement and possibilities of control in the short term if the health measures and protocols continue to be complied with.

According to the MINSAP report, 42.7% (367) of the 858 cases were asymptomatic. Since the beginning of the pandemic in Cuba, 29,658 patients without symptoms have been diagnosed as positive, which represents 46% of all those infected.

Referring to this, Dr. Francisco Durán explained that among the day’s cases there are seven infants, adding that there are a total of 6,309 positive cases of pediatric age, 774 of them active and one in serious condition.

After compiling the data for Saturday, March 6, there are 4,510 active cases in Cuba, a slight decrease compared to the previous day. Of these, 4,441 present a stable clinical evolution, while 41 people are in serious condition and 28 in critical condition.

There were 890 discharges, with which 50,779 patients have already recovered in the nation, and the number of deaths increased to 348 with the death of four people, among which a 49-year-old doctor stands out.

According to the health authorities, a total of 23,347 patients are hospitalized for clinical epidemiological surveillance and there are 4,121 suspects, while another 14,716 people are under surveillance through the primary healthcare system.

According to official sources, 2,519,444 diagnostic tests (PCR) have already been carried out in Cuba. During the last months the number of tests has increased considerably with the operation of 22 laboratories for the processing of the samples, which totaled 18,570 on this Saturday, March 6.