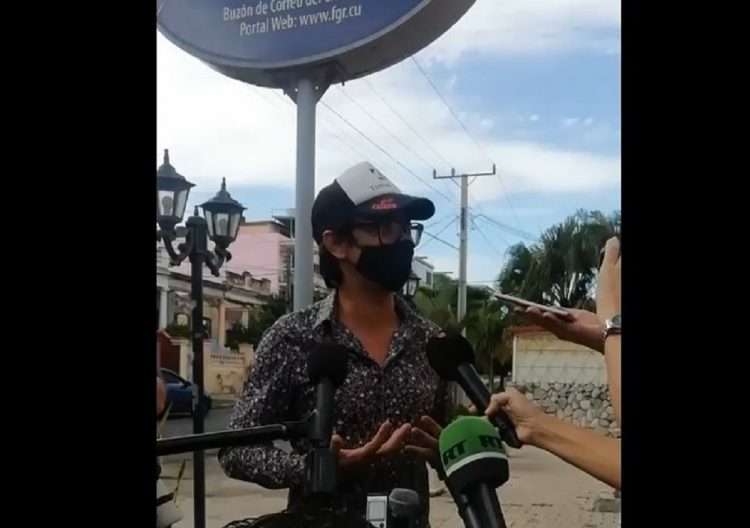 Activist and playwright Yunior García, one of the promoters of the march announced for November 15. Photo: screenshot of the video published by Razones de Cuba

Cuban playwright and activist Yunior García, promoter of the “peaceful and civic” march called for November 15, whose character the Cuban prosecutor’s office confirmed yesterday as “illegal,” responded to questions put by the foreign press accredited on the island. This exchange was published by the Razones de Cuba official platform.

“If the Constitution is to be read that way, we are lost, because I know many decent people who voted for that Constitution thinking that it was a Constitution made so that the people could defend themselves from any type of oppression, including oppression from Power; but, if the reading that is going to be made is the opposite, that it is a State that uses the Constitution to protect itself from its own people, we are lost,” he responded to one of the media present.

In his words, the march called by the Archipelago space, is based on and contains a civic and peaceful essence, and the intention is to guarantee that it happens that way.

“Without violent slogans, without aggressiveness, dressed in white, with songs, with flowers to Martí and ending with the national anthem that is everyone’s anthem. That is the march we are calling. To those who call for violence, we tell them that the number one objective it has is to demonstrate against violence.”

The meeting lasted 10 minutes and García also referred to matters such as the fact that in the letters presented to the governors when they sought authorization for the march “nowhere is there talk of changing socialism.”

The meeting took place outside the Attention to Citizens Office of the Havana Provincial Prosecutor’s Office, apparently minutes before the deputy chief prosecutor of the Havana Provincial Prosecutor’s Office, Yahimara Angulo, declared that if the promoters of the march insisted on carrying it out despite the authorities’ negative answer, they will face “legal consequences that would mean promoting and carrying out illegal marches.”

“Cuba’s future agenda has to be a collective construction, it has to be written jointly, it has to be the result of a consensus between different agendas and different ideas. My agenda is pluralism, that could be my agenda. My agenda is a real democracy, that democracy is a tired old story but for me it is the real participation of all citizens in the real reality of their country. And it is obvious that in Cuba there is a group of Cubans who are being discriminated against, who are not allowed to participate, who are stigmatized, demonized by power and that has to end,” Yunior said.

To the question of one of the reporters regarding calls for violence by some organizations and people who have publicly supported the demonstration and have incited to join in a violent way, the playwright affirmed that the first objective of his call is to demonstrate against violence, “therefore, whoever is inciting violence, whoever wants to create chaos is not responding to the call that we have made since the first day this march was announced.”

“We cannot support violence, from one side or the other, violence is reprehensible from any side,” said Yunior, responding to the question of whether they would be willing to do without these people and organizations in their convocation.