“Those individuals who are involved in violating the fundamental and universal rights of the Cuban people, that is something to which we have made it very clear that we have every intention of responding,” Juan González, President Biden’s main adviser for Latin America, said to the EFE agency. 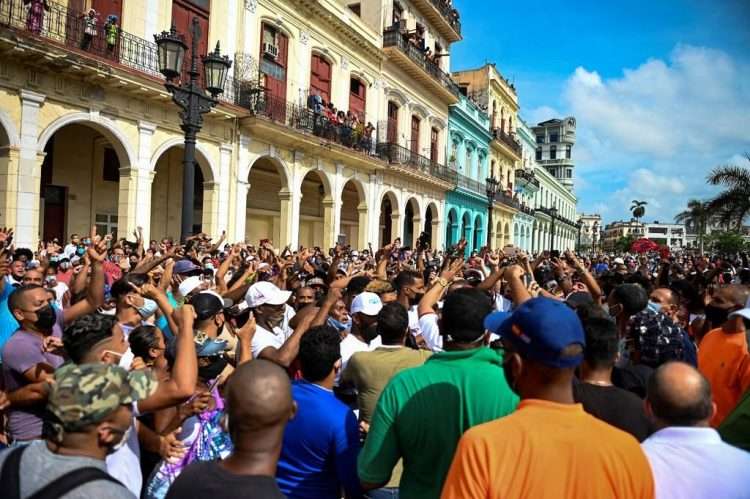 Archive photo of the anti-government protests in Havana, in July 2021. Photo: Yamil Lage/AFP via La Nación/Archive.

The government of the United States warned this Friday that it will respond, possibly with sanctions, if the “fundamental rights” of the Cuban people are violated or the promoters of the opposition civic march called for November 15 in Cuba are prosecuted.

Juan González, U.S. President Joe Biden’s main adviser for Latin America, indicated this in an interview with the EFE agency after the Cuban Prosecutor’s Office warned that crimes would be imputed to the organizers of that opposition march if they carry it out.

“Those individuals who are involved in violating the fundamental and universal rights of the Cuban people, that is something to which we have made it very clear that we have every intention of responding,” González told EFE by telephone.

Biden’s adviser thus responded to the question of whether Washington will punish Cuban officials in the event that the organizers of the November march end up being prosecuted or imprisoned for carrying out this peaceful demonstration, an initiative unprecedented in 60 years.

The island’s government did not authorize the holding of that march, which it considers “illegal,” and this Thursday the Provincial Prosecutor’s Office of Havana affirmed that if the organizers maintain their plan, they could commit crimes punishable by economic sanctions and imprisonment of three months to a year.

Defying the authorities, the activists announced last week that they would maintain the call for their “peaceful and civic” march, which aims, according to its organizers, to demonstrate against violence, to demand that “all the rights of all Cubans are respected,” and the release of political prisoners, among other issues.

The United States has harshly criticized the Cuban government’s decision to prevent the protest from being held, and González said this Friday that the leaders of the Caribbean country are “afraid of having a national conversation with the Cuban people.”

“Threatening peaceful protesters shows that one has lost the will and support of the people,” stressed Biden’s adviser, who did not refer, at least in the EFE report, to a possible financing or organization of the initiative from U.S. territory, as alleged by the Cuban authorities.

However, he remarked that “the future of Cuba will not be determined from Washington, (but) we are fully committed to supporting, backing and strengthening the voice of the Cuban people who want change.”

González also spoke of the tougher line that Biden has taken towards Cuba, who has sanctioned senior military officials on the island for their alleged role in the repression of the protests of July 11 and has avoided following the path of the thaw marked by former President Barack Obama (2009-2017).

“What we have to recognize is that there was a world before July 11 and another after, where the regime (Cuban government) took off its mask in repressive actions against the people,” said the U.S. official.

Unlike what happened during the 1994 rafter’s crisis, what happened in July during the protests in Cuba “is now being seen by the world,” and “the people who are sacrificing their lives, their rights” want “to be seen, and that they be defended,” he added.

“We are committed to that, and we do not see this as a hard line, but rather a commitment in favor of the fundamental rights of Cubans,” González said.

The adviser did not want to comment on Biden’s position on the U.S. embargo on Cuba, stating that this is “a matter for the U.S. Congress,” which is the one that has the capacity to lift it.

If he wanted to, Biden could urge Congress to lift the embargo, as Obama did in his second term, but his administration chose this year to defend it during the annual vote at the UN on a resolution condemning that U.S. measure, by voting against the text.