The island has already started de-escalation in its different territories and sectors, which will be joined by tourism on a large scale as of November 15.

Eric Caraballoso
in Tourism in Cuba
1 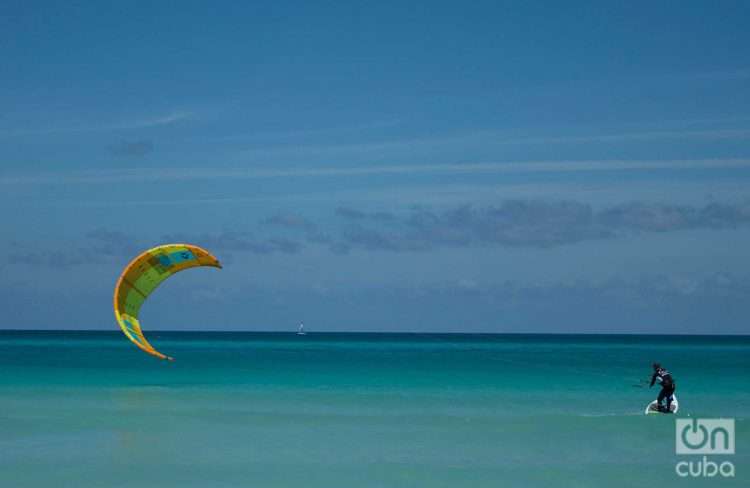 The pandemic has been a devastating blow to the tourism sector in Cuba. If before the arrival of COVID-19 the island managed to receive more than 4 million visitors per year — even with the measures to restrict travel imposed by the Donald Trump administration —, last year it barely exceeded one million and this year it will be far from the initial forecasts, which aimed to exceed 2 million at the end of December.

In fact, in 2021 the setback will be even more profound, since until August only a little more than 160,000 tourists had traveled to the country, about 2,960,000 less than the same period in 2019 and 824,000 less than in the first eight months of last year, according to data offered weeks ago by the Ministry of Tourism (MINTUR).

The main cause of this steep fall has been the strong and prolonged wave of COVID-19 in recent months ― marked by the arrival in the country of more contagious and aggressive variants of the coronavirus, such as Beta and Delta ―, which made it necessary to restrict international flights and to limit tourist activity to specific destinations, such as Varadero and Cayo Coco. And, as might be expected, such a collapse has had a disastrous impact on the already dwindling coffers of the Cuban state.

However, with the advance of the vaccination against COVID-19, as a result of which more than 60% of the Cuban population already has the complete immunization scheme, and an ostensible improvement in the epidemiological scenario, as reflected by official statistics, Cuba already began the de-escalation in its different territories and sectors, which will be joined by tourism on a large scale as of November 15. And it will do so — along with a change in the protocols for travelers and a “controlled” and “gradual” reopening of facilities and services — “with optimism” for the high season that is beginning, according to the sector authorities.

This was confirmed this Tuesday by Cuban Minister of Tourism Juan Carlos García during a press conference broadcast live on state television. In it, he offered details on the de-escalation in this key area for the country’s finances — which includes, for example, the elimination of the mandatory quarantine as of November 7 and the requirement of a vaccination certificate or a negative PCR test, except for children under 12 years of age — and on the measures that will be applied in order to guarantee the safety of workers and guests, and prevent a re-outbreak of COVID-19 destroying the advances in the confrontation with the disease and the urgent oxygenation of the Cuban economy.

In his appearance, García emphasized that Cuban tourism is focused on the upcoming operations that will open as of mid-November, and for which the country’s 10 international airports are already “ready,” and on offering a “safe and secure” quality service” that catalyzes the desired recovery, both in the state and non-state sectors. In addition, he forecasted the arrival of more than 100,000 visitors in the final two months of the year, a figure that is still low, but at the same time “an important challenge,” in the opinion of the minister, who rather than talk about the losses caused to his sector due to the pandemic, said he preferred to “look ahead” and “what must be anticipated in order to make the level of satisfaction higher.”

According to what was reported by the head of MINTUR, the announcement of the reopening of borders and larger-scale tourist operations has had “a very favorable reaction,” and tour operators have requested more capacities than initially planned, while there are also more requests for flight and a reactivity of air connectivity, both from regular and charter airlines. This, he said, has occurred in both traditional markets, such as Europe and Canada, as well as other emerging markets that have been gaining more and more prominence, among which he highlighted Russia, a country that practically capitalized on the limited hotel capacities in operation on the island during 2021.

Similarly, García assured that Cuba “does not discriminate against any country” and is even open to travel and tourism from the U.S. if the government of that nation allowed it, in an explicit nod to a market that grew exponentially for the island until the Trump administration closed the lock. Along the same lines, he commented that the island is in the best position to carry out more negotiations with tour operators, hotel chains, and airline and cruise companies, even though the latter cannot arrive, at least for now, from U.S. ports.

“We don’t think that on the 15th the country’s capacities will be full, but we can progressively have an early winter. It depends on how the markets react, but the scenario is increasingly favorable and we are optimistic,” reiterated the minister, who pointed out that to face the new season “we haven’t stood idly by” during the stoppage caused by the pandemic. For this, he said, they have worked to “diversify the Cuban tourism product,” with the design of new offers beyond the traditional areas of sun and beach, and nature, to also promote others such as health tourism ― with the COVID-19 vaccines as an attraction to take advantage of ― and the cultural one, in alliance with the ministries of both sectors.

He also pointed out that as of November 15, the circuits and the mobility of tourists throughout the country will be restored, 4,000 new rooms will be added to the existing hotel plant on the island, and that work has been done on the existing ones to increase their comfort and to adapt the facilities to the “new normal” conditions imposed by COVID-19, as well as to expand connectivity possibilities, not only in five-star hotels but also in lower-category hotels and other extra-hotel centers. This, among other things, will make it possible to take advantage of the potential of mobile applications and online services and payments.

And regarding payments, he also recalled the already launch of prepaid cards in freely convertible currency, which can be bought by tourists to purchase products and services, as an alternative to using the dollar in cash, officially vetoed by the Cuban authorities. In this regard, he clarified that other international currencies such as the Canadian dollar, the euro, the British pound, the Japanese yen and the Mexican peso remain authorized, always at the official exchange rate.

The head of the MINTUR dedicated a good part of what he said to the press to detail the measures and protocols that will be implemented in Cuba in the coming weeks, with a view to the large-scale reopening of flights and international tourism. Among them, the already advanced elimination of the mandatory quarantine for international travelers arriving in the country, which will come into effect on November 7. Travelers will be required to provide a COVID-19 vaccination certificate or a negative PCR result performed within 72 hours prior to travel. The exception, in both cases, will be children under 12 years of age, who may enter the island without these requirements.

In the case of vaccination certificates, the minister pointed out that those of all vaccines that have been certified by the corresponding regulatory agencies will be allowed, which opens the door to drugs not yet validated by the World Health Organization (WHO), like the Russian Sputnik V. And he added that airlines have been insisted to verify the evidence that travelers are immunized or, failing that, have a negative PCR.

García also said that at the border, visitors will be required to present the Declaration of Traveler’s Health and epidemiological surveillance will be maintained at airports and other points of entry, where random PCR tests will be carried out and the appearance of suspicious symptoms of COVID-19 will be monitored. The same will happen in hotel facilities, where, he said, “medical care is being strengthened” and measures already implemented during the pandemic have been maintained, such as the mandatory use of a mask in closed spaces and common areas, limited capacity in restaurants and other places, disinfection of hands and surfaces, and the requirement of physical distancing, among others.

In the event that a visitor is detected with symptoms, they will be referred to a healthcare center and a diagnostic test will be performed. And the hotel-hospitals for tourists who test positive will be maintained. Meanwhile, the owners of the rental houses ― who are also reopening their doors ― will be responsible for reporting “immediately” if any of their guests shows signs of being sick, while, according to García, the health areas in the communities in which these houses are located are responsible for the epidemiological surveillance of the tourists staying in them.

As for Cuban travelers residing on the island, they must go to the doctor’s office in their area within a period of no more than 48 hours after their arrival, and have “a follow-up” by their health area. In addition, those not vaccinated will undergo an antigen test on the seventh day of their arrival in Cuba and “if they present symptoms, they will be treated as a suspicious case,” according to the minister.

Finally, García announced that on November 15 tourist facilities for the domestic market will also reopen, although some tourist destinations and territories will be opened before that date. Thus, as of next October 25, the famous Varadero beach resort will open its doors to Cubans from outside Matanzas, at the same time that “all opened facilities,” including those that operate for the international market, such as those located on the keys to the north of Cuba, will start being marketed.

This reopening, according to the head of the MINTUR, will also be carried out in compliance with “all established protocols” and will increase “as interprovincial and inter-municipal mobility increases, taking into account the situation of each territory.” The plan, he said, is “to begin recovering our customs, to be able to visit relatives and go on vacations, as well as to recover the economic activity of the country,” after the dark period of the pandemic. However, it will be time that will finally say how effective or not the planned strategies and protocols are, and to what extent the de-escalation of the tourism sector justifies the optimism of the authorities and, with them, of many Cubans.