Havana has been the last Cuban region to join a three-stage de-escalation that had already started two weeks ago in almost the entire country, and is the only place where there is still a drip of cases, less than ten a day on average. 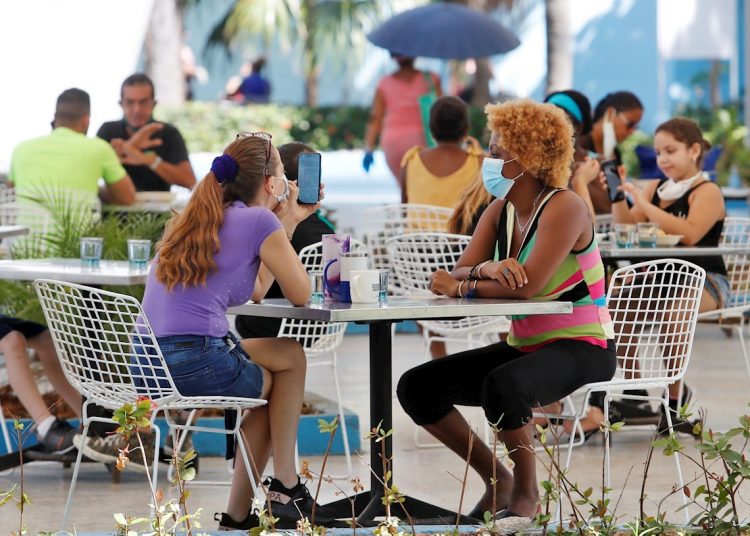 Several people eat ice cream this Friday, July 3, 2020 at Coppelia, during the first day of the ice cream parlor’s reopening in Havana since the coronavirus pandemic began. Photo: Yander Zamora/EFE.

Restaurants, beach and public transportation but with mask and distancing: since this Friday all of Cuba is officially in the recovery phase and once the battle against the coronavirus has been won, the next challenge will be to overcome the serious economic crisis affecting the island, aggravated by the pandemic.

Havana has been the last Cuban region to join a three-stage de-escalation that had already started two weeks ago in almost the entire country, and is the only place where there is still a drip of cases, less than ten a day on average.

With 2,361 infections of the SARS-CoV-2 coronavirus to date and 86 deaths, Cuba has managed to keep the virus at bay compared to other countries with a similar number of inhabitants, thanks to a strategy based on the tracking and immediate isolation of confirmed and suspicious cases and their contacts.

The capital had been waiting impatiently for days for the green light to officially join the rest of the country in the recovery, although unofficially, as many Cubans have ironically been saying lately, the city “had been in phase 1 for more than a month.”

And the fact is that for weeks it was obvious that in the streets of Havana there was much more traffic, too many people, and even children playing. Confinement was never compulsory, but the authorities had asked the population to only go out for what was essential and they wrongly trusted that the absence of public transportation would limit mobility.

Among the restrictions that were lifted in the capital is going to the beach and swimming pools (with limited capacity), activities highly anticipated by Havana residents to cope with the overwhelming heat of the Caribbean summer.

The beaches near the city did not wake up crowded, but there were many young people and children who, in small groups of family or friends, went to enjoy the sand and the sea on this first day of de-escalation.

“I had been waiting for it since a long time ago,” Ulises, a 17-year-old student who has spent the last three months at home, studying and helping his mother with housework, told EFE. Like his friend Harrison, 14, for whom the day was “perfect” and who is also looking forward to visiting the family he has not seen since the start of the measures to curb the pandemic.

Jessica, a 19-year-old librarian, claimed that she couldn’t sleep the night before because of the excitement since “I hadn’t gone out for four months and wanted to get to the beach early,” while Mildred Rodríguez, a 45-year-old telecommunications operator was also “waiting anxiously” and wanted to go the first day in case the coronavirus cases increase and restrictive measures are decreed again.

Another expected return is that of public transportation, in a country where very few people can afford to buy their own car.

The buses started rolling again this Friday with limited capacity and Havana residents, who for weeks have walked indescribable lengths and also dusted off their bicycles, once again lined up at the bus stops, a typical image of the city ​​that the pandemic erased for three months.

“We were walking a lot with the problem of transportation restrictions, today it is starting to improve a little bit,” Héctor Rómura, a 77-year-old fisherman returning home after spending the night fishing, told EFE.

And the fishermen have also returned to the Malecon in Havana, the most beloved and crowded place in the city, deserted since the end of March.

Belkis Ortiz, a 50-year-old housewife, spent the time in wait with humor as she recalled these weeks without transportation, “we Cuban are used to walking, making do….”

The gradual revival also includes in this first phase the reopening of bars and restaurants, although those in the private sector―the famous “paladares”―are taking it easy and not all of them have made an immediate comeback.

Among the concerns of this non-state sector that has flourished in recent years is that of a shortage of supplies. In Cuba there are no wholesale markets and they must supply their businesses in the same state businesses as the rest of the population, but the shortages and capacity limitations have caused long lines and hours of waiting to buy basic need products.

Like the mask, hygienic measures or social distancing, “the lines are also here to stay,” Cubans are saying caustically these days, putting the blame on an economic crisis, yet another, which is increasingly exacerbated.

The country’s already lack of foreign exchange, intensified by the decrease in Venezuelan aid and the new U.S. sanctions, has worsened with the pandemic, which forced the paralyzation of the tourism sector, one of the main sources of income for both the state as well as the self-employed.

During this first phase of reopening, Cubans will be able to practice local tourism, but regular flights and the arrival of foreign tourists will not resume with normality until the third phase.

In the second phase in which almost the whole country entered this Friday except for the capital and neighboring Matanzas, charter flights are allowed only to the keys on the north and south coasts of the island, without visitors having access to the rest of the country or contact with the local population except with hotel workers.

The authorities have not established a fixed calendar for phase changes, which will depend on the evolution of the sanitary and epidemiological indicators of each province.