About 30 environmentalists appeared this Monday at the state agency known as Zoonosis with signs and slogans complaining about animal abuse and finally managed to rescue the dogs that were there. 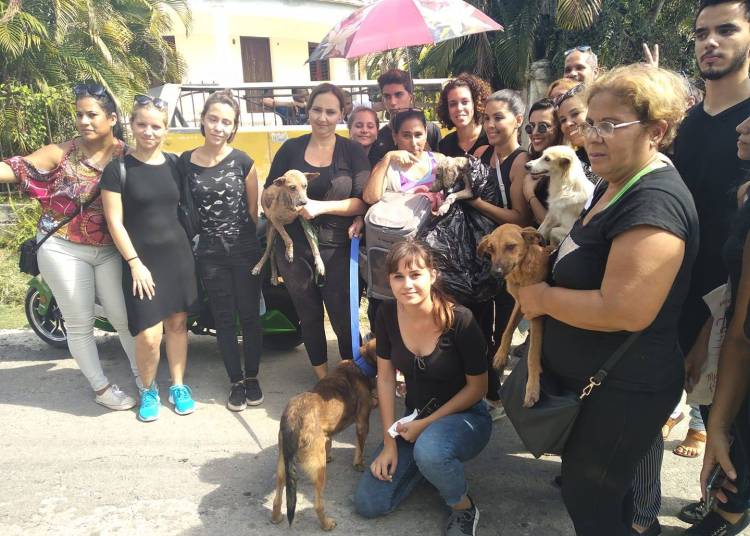 Cuban activists who rescued animals that were to be put to sleep in Havana by the state agency Zoonosis, on November 11, 2019. Photo: Beatriz Batista / Facebook.

Cuban activists in defense of animals this Monday managed to get the authorities to hand over a dozen dogs that were about to be put to sleep, after an unusual protest in front of the headquarters of an animal observation center on the outskirts of the capital.

About 30 environmentalists showed up in the morning at the state agency known as Zoonosis with signs and slogans complaining about animal abuse and demanding an animal protection law.

The protectors had been denouncing for days on the social media a collection of stray dogs that were going to be put to sleep by Zoonosis for the celebrations of the 500th anniversary of Havana and the visit of the king and queen of Spain. These denunciations, also backed by artists and public figures, climaxed in this Monday’s protest.

“Half an hour after being there with the posters, police officers and government, (communist) party, provincial, municipal and Ministry of Public Health officials arrived, which was exactly what we wanted: that we be heard, seen and that they take us seriously,” wrote the young Beatriz Batista, one of the organizers, on her Facebook profile.

According to her, the dialogue “did not begin in good terms but in the end it was fruitful. We were given back the 11 dogs that were in Zoonosis, 2 remained quarantined under the commitment that they would not be put to sleep and would later be handed over for their subsequent rehabilitation.”

“We are animal lovers. For years we have devoted ourselves to protecting animals from abuse and we haven’t been heard until now,” Batista told the AP agency while receiving a dog that had come out of the Zoonosis cages and which had quite a lot of scabies.

“The community took a big step today,” added the young woman, who said they had gotten a meeting for Tuesday with local officials. In addition, she called for not making another demonstration or other actions until the results of the meeting are known.

The group of activists who demonstrated in Zoonosis in April managed to get the authorization to march through the streets of Havana demanding an Animal Protection Law. It had a wide call, but since then the authorities have not allowed more marches or protests in other places.

On that occasion―when Dog’s Day is celebrated―hundreds of activists walked about 3 kilometers with banners and raised their voices to say “Law yes, abuse no” and “Stop animal abuse. They also feel.”

In addition to the most visible situation, that of stray dogs, animal advocates have also drawn attention to the need to protect horses used for transportation and agriculture, the animals involved in cockfights and dogfights, illegal on the island, and even exotic animals caged in zoos.

The movements that work to raise awareness about the rights of all animals―which include Aniplan, CEDA and PAC―organize free adoptions, vaccination and sterilization campaigns, and also report abuses.